Fereydoun Farrokhzad (Persian : فریدون فرخ زاد‎) (7 October 1936 – 7 August 1992) was an Iranian singer, actor, poet, TV and radio host, writer, humanitarian and political opposition figure. [1] He is best known for his variety TV show "Mikhak-e Noghrei" (The Silver Carnation) which introduced many artists such as Ebi, Leila Forouhar, Shohreh, Sattar and many more. He was the brother of the acclaimed Persian poets Forough Farrokhzad and Pooran Farrokhzad.

Farrokhzad was forced into exile after the Islamic Revolution in 1979, and after relocating to Germany was the victim of an unsolved murder. The murder is widely believed to be the work of the Islamic Republic government of Iran, as part of the chain murders in 1988–98. [2]

Fereydoun Farrokhzad was born in Tehran, to career military officer Colonel Mohammad Bagher Farrokhzad (originally from Tafresh) and his wife Touran Vaziri-Tabar. [3] He was the fourth of seven children (Pooran, Amir (Masoud), Forough, Fereydoun, Gloria, Mehrdad, and Mehran). After graduating from high school he went to Germany and Austria for his post-secondary education. He received his doctorate in Political Science from Munich University.

At a young age Fereydoun had a passion for poetry and for singing. He turned that passion to reality in 1962 when he started writing poems in German which were published in two German newspapers. In 1964 he published his collection of poems called "Fasleh Deegar" (Another Season). His book was critically acclaimed and was honored by many German poets. Five months after the release of "Fasleh Deegar", Fereydoun Farrokhzad received the Poetry Award of Berlin. For a couple of years Farrokhzad was a member of the Munich Academy of Poetry.[ citation needed ] In 1966 he found his way to the Television and Radio of Munich. On Radio he had a comedy and music program which played middle eastern music including music from Iran. On TV he created and produced a show called خيابان های آلپ (Alpine Roads). In 1967 he returned to Iran and performed on successful radio and TV shows. His most successful TV show was "Mikhakeh Noghrei" (Silver Carnation), and his radio show which aired every other Friday mornings called "Jom'eh Bazzar" (Friday Bazaar). The TV show was watched by millions of Iranians. On the show Farrokhzad introduced and discovered a number of Iranian artists including Sattar, Shohreh, Shahram Solati, Ebi, Morteza, Rouhi Savoji, Hamid Shabkhiz, Leila Forouhar, Saeed Mohammadi, and various others. After the 1979 revolution, Farrokhzad was imprisoned, then released. He escaped the country and settled in the country of his youth college years, Germany. [4]

According to Voice of America , Farrokhzad was known by his fans as an "educated patriot" who frequently criticized the Islamic Republic and its leaders and who was present during many demonstrations against the clerical government.

Farrokhzad produced a weekly radio show for the "Voice of the Flag of Freedom Organization of Iran," the radio station of the Organization of Kaviyani Banner, an "organization of exiled supporters of the Iranian monarchy." [5] Farrokhzad also acted in a film, I Love Vienna , [6] which was considered by some Iranian authorities as anti-Islamic. [4] [ failed verification ]

Esfandiar Monfaredzadeh has proposed that Farrokhzad was homosexual. [7] He said: "His main obstacle was the homosexuality that he was not ashamed of; he knew it and he wanted people to understand it." However, no record of such statement was found about Farrokhzad.

Farrokhzad married and divorced twice. His first marriage took place in 1962, to a German-Polish woman named Ania Buchkowski, whom he met in Oxford. Like Farrokhzad, she had a passion for poetry and theater; it was after meeting her that Farrokhzad started writing poems. The result of this marriage was a son named Rostam. Farrokhzad and Ania later separated and got divorced. In 1974 he married an Iranian woman named Taraneh.[ citation needed ] [8]

On August 8, 1992 Farrokhzad's body was found in the kitchen of his apartment in Bonn, Germany after neighbours reported barking by his two dogs. Farrokhzad had been killed violently, having been stabbed repeatedly in the face and upper torso. [9] Many urban legends surround Farrokhzad's death, including the widely repeated myth that he was beheaded.

Prior to his murder, Farrokzhad had been involved in producing an opposition radio program and reportedly received death threats. In his show the Royal Albert Hall in London he criticized Khomeini and made fun of Khomeini's obsession with sex in his Ressaleh book, which followed death threats and concerns for him. [5]

According to the U.S. state-funded Voice of America (VOA), the murder was "widely believed to be the work of Iran's Islamic government". [2]

Farrokhzad remains a significant Iranian cultural icon whose popular music and television programs continue to be circulated through various media platforms. His murder—a political assassination of a celebrity activist entertainer—is a well known and oft-cited event amongst Iranians.

Forough Farrokhzad was an influential Iranian poet and film director. She was a controversial modernist poet and an iconoclast, writing from a female point of view. 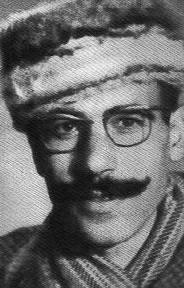 Samad Behrangi was an Iranian teacher, social critic, folklorist, translator, and short story writer. He is famous for his children's books, particularly The Little Black Fish. Influenced by predominantly leftist ideologies that were common among the intelligentsia of his era‌, which made him popular among the Organization of Iranian People's Fedai Guerrillas, his books typically portrayed the lives of the children of the urban poor and encouraged the individual to change his/ her circumstances by her own initiatives.

Tafresh is a city and the capital of Tafresh County, in Markazi Province, Iran. As of the 2011 census, its population was 25,912. The inhabitants are Persian-speaking.

Jahangir Forouhar was an Iranian actor.

Darrous is a neighborhood in Shemiran, northern Tehran, Iran. It is considered one of the most affluent areas in the city, as many modern and fashionable families reside there. Darrous is bounded by Pasdaran, Gholhak, Doulat, and Ekhtiyarieh.

The Chain murders of Iran, or Serial murders of Iran, were a series of 1988–98 murders and disappearances of certain Iranian dissident intellectuals who had been critical of the Islamic Republic system. The murders and disappearances were carried out by Iranian government internal operatives, and they were referred to as "Chain murders" because they appeared to be linked to each other.

Iranian New Wave refers to a movement in Iranian cinema. It started in 1964 with Hajir Darioush's second film Serpent's Skin, which was based on D.H. Lawrence's Lady Chatterley's Lover featuring Fakhri Khorvash and Jamshid Mashayekhi. Darioush's two important early social documentaries But Problems Arose in 1965, dealing with the cultural alienation of the Iranian youth, and Face 75, a critical look at the westernization of the rural culture, which was a prizewinner at the 1965 Berlin Film Festival, also contributed significantly to the establishment of the New Wave. In 1968, after the release of Shohare Ahoo Khanoom directed by Davoud Mollapour, The Cow (گاو) directed by Darius Mehrjui followed by Masoud Kimiai's Qeysar (قیصر) in 1969, Nasser Taqvai's Tranquility in the Presence of Others, and immediately followed by Bahram Beyzai's Downpour, the New Wave became well established as a prominent cultural, dynamic and intellectual trend. The Iranian viewer became discriminating, encouraging the new trend to prosper and develop.

Farrokhzād may refer to the following:

Fereydoon is an Iranian mythical character.

The list is not comprehensive, but is continuously being expanded and includes Persian poets as well as poets who write in Persian from Iran, Azerbaijan, Iraq, Georgia, Dagestan, Turkey, Syria, Afghanistan, Turkmenistan, Tajikistan, Uzbekistan, Lebanon, China, Pakistan, India and elsewhere.

Fereidoon Tavallali or Fereydoun Tavallali 1917, Shiraz - March 1985, Shiraz). was an Iranian poet, political commentator, archeologist and considered intellectual. In poetry, Tavallali is of a second generation of Iranian modernists, the nowpardaz.

Iraj Gorgin was a prominent Iranian-American radio and television broadcaster and journalist.