Fescennia or Fescennium was an ancient city of Etruscan/Faliscan origin, which is probably to be placed immediately to the north of the modern Corchiano, 6 miles (9.7 km) north west of Civita Castellana, in central Italy. [1] The Via Amerina traverses it. At the Riserva S. Silvestro, walls exist. At Corchiano itself, however, similar walls may be traced, and the site is a strong and characteristic triangle between two deep ravines, with the third (west) side cut off by a ditch. Here, too, remains of two bridges may be seen, and several rich tombs have been excavated. [2] [3] [4]

The term Fescennine Verses refers to a certain kind of drinking song popular at festivals in ancient Rome and elsewhere. According to Festus, these songs were introduced from Fescennia, but others have thought that there is no reason to assume that any particular town was especially devoted to the use of such songs. [5]

Fescennia's warriors are also mentioned in Book VII of Virgil's Aeneid as following Messapus, the 'Steed Tamer' in the war waged by Turnus against Aeneas. [6]

Peter Buchan, was a Scottish editor, publisher, and collector of ballads and folktales. He was born in Peterhead, Aberdeenshire. 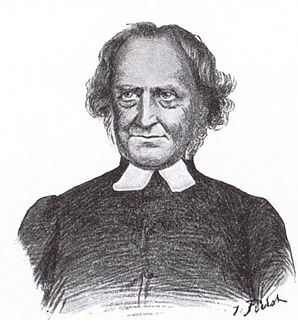 Claus Harms was a German clergyman and theologian.

Renée-Caroline-Victoire de Froulay de Tessé, marquise de Créquy de Heymont de Canaples d'Ambrières, was a French woman of letters, by marriage a member of the Créquy family, which counted several distinguished public servants and prelates, particularly in the 16th, 17th and 18th centuries. She was friends with d'Alembert, Rousseau and de Meilhan. Although she was arrested, she survived the terror of the French Revolution. The Souvenirs de la Marquise de Créquy is attributed to her but may be by Cousin de Courchamps.

Isidor Kalisch was an American reform rabbi and writer.

Fescennine Verses, one of the earliest kinds of Italian poetry, subsequently developed into satire and Roman comic drama.

Avella is a town and comune in the province of Avellino, Campania, southern Italy.

Joannes Bassianus was an Italian jurist of the 12th century.

Arpi, Argyrippa, and Argos Hippium was an ancient city of Apulia, Italy, 20 mi. W. of the sea coast, and 5 mi. N. of the modern Foggia. The first name was Argos Hippium then Argyrippa and later Arpi.

Sergei Nikolayevich Glinka was a minor Russian author of the Romantic period.

Christopher Glaser, a pharmaceutical chemist of the 17th century.

Jean-Philippe Baratier was a German scholar. A noted child prodigy of the 18th century, he published eleven works and authored a great quantity of unpublished manuscripts.

Marc-René de Voyer de Paulmy d'Argenson, was a French administrator and diplomat, who served as ambassador to Venetian Republic from 1651 to 1655. 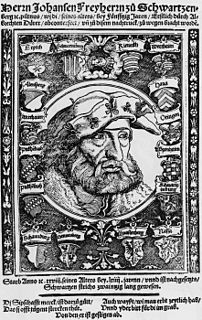 Johann of Schwarzenberg was a German moralist and reformer who, as judge of the episcopal court at Bamberg, introduced a new code of evidence which amended the procedure then prevalent in Europe by securing for the accused a more impartial hearing.

The Act of Classes was passed by the Parliament of Scotland on 23 January 1649. It was probably drafted by Lord Warriston, a leading member of the Kirk Party, who along with the Marquess of Argyll were leading proponents of its clauses. It banned Royalists and those who had supported the Engagement from holding public office including positions in the army. Against sizeable opposition the rescinding of the Act took effect on 13 August 1650.

An Album, in ancient Rome, was a board chalked or painted white, on which decrees, edicts and other public notices were inscribed in black.