Fethiyespor is a Turkish sports club based in Fethiye, Muğla.

Fethiyespor were promoted to the Turkish Second Division in the 2005/6 season. In the 2011/2 football season Fethiyespor reached the end of season promotion play-off games but lost their final match.

Fethiyespor were promoted to TFF League One after play-off games which concluded on 31 May 2013.

On 4 December 2013, Fethiyespor recorded perhaps the best result in their history when they knocked Fenerbahçe out of the Turkish Cup at Fenerbahçe's Şükrü Saracoğlu Stadium. Fenerbahçe were at the time were comfortable leaders of the Süper Lig. Onur Okan’s header in the 77th minute, followed by a powerful shot from the same player six minutes later, was enough to shock the hosts with a 1–2 scoreline. 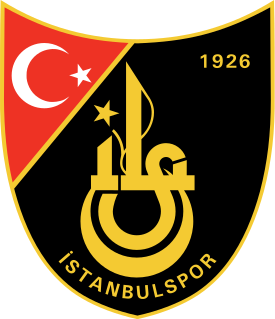 Ertuğrul Sağlam is a Turkish football manager and former player who is currently the manager of Samsunspor.

Göztepe Spor Kulübü also known as Göztepe, is a Turkish sports club based in the Göztepe and Güzelyalı neighborhoods of İzmir. The "SK" refers to sports club, as besides football, the club also has departments in fencing, triathlon, handball, sailing, swimming, and windsurfing.

Kasımpaşa S.K., also known as Kasımpaşa SK or simply Kasımpaşa, is a Turkish professional football club located in the Beyoğlu district of Istanbul. They play their home games in the Recep Tayyip Erdoğan Stadium in Kasımpaşa, a neighbourhood of the district of Beyoğlu. The club is one of five Süper Lig clubs representing Istanbul, along with Fenerbahçe, Galatasaray, Beşiktaş and İstanbul Başakşehir. The 2018–19 season is Kasımpaşa's fifteenth (non-consecutive) season in the Süper Lig in their 98th year in existence.

Bucaspor is a professional Turkish football based in Buca, Izmir. Formed in 1928, Bucaspor are nicknamed Fırtına (Storm). The club colours are yellow and navy.

Kartalspor is a sports club located in the Kartal district of Istanbul, Turkey. The club's football team plays in the Bank Asya First League after finishing 2nd in the Second League Promotion Group in the 2006–2007 season. Kartal SK started the 2007–2008 season well and was 3rd with half of the games played, but had a disappointing second half of the season and finished 13th. This pattern recurred in the 2008–2009 season, finishing 12th whilst having been 6th halfway through.

Mersin İdmanyurdu Sports Club; located in Mersin, east Mediterranean coast of Turkey in 2006–07. The team participated in TFF League B for 2nd time in the league's 5th season. Mersin İdmanyurdu has finished 2006–07 TFF League B Classification Group at third place remained in the league. Team participated in 2006–07 Turkish Cup and eliminated in first round. 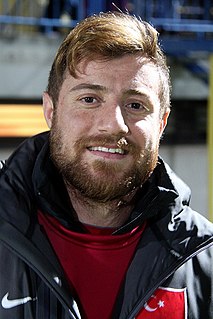 Okan Alkan is a Turkish professional footballer who currently plays for Adana Demirspor.

Sammy Ndjock is a Cameroonian professional footballer who currently plays for MP in the Finnish Kakkonen.

Fenerbahçe S.K., commonly known as Fenerbahçe, is a Turkish professional football club based in Istanbul, Turkey. The club's name comes from Fenerbahçe neighbourhood of Istanbul. The professional football department are the most notable one of Fenerbahçe SK, a major multi-sport club who compete in football, basketball, volleyball, athletics, swimming, sailing, rowing, boxing, and table tennis, among others, with many major honours won in each department. Fenerbahçe are one of the most successful and best supported football teams in Turkey, having never been relegated to lower divisions, and currently compete in the Turkish Super League and the Turkish Cup. They are nicknamed Sarı Kanaryalar and the team play their home games at Şükrü Saracoğlu Stadium, their own traditional home ground in Kadıköy, Istanbul.