Fifi and Jules was an Australian drive radio show with Fifi Box and Jules Lund and anchor Byron Cooke. It was broadcast across the Today Network from 4–6 pm weekdays.

The show commenced in February 2011 after Hamish Blake and Andy Lee announced in August 2010, that they would be cutting down to a weekly show in 2011. [1] Fifi Box and Jules Lund were announced as hosts of drive from Monday to Thursday.

In February 2013, Hamish & Andy moved to 4 pm Mondays, with Fifi and Jules presenting Tuesday to Friday.

In July 2013, Hamish & Andy moved to 3–4 pm each afternoon followed by drive with Fifi and Jules at 4–6 pm from Monday to Friday.

In November 2013, Fifi Box announced that she would be moving to host breakfast on Fox FM.

Sophie Monk replaced Fifi Box whilst she was on maternity leave.

In December 2013, it was announced that Fifi and Jules would be replaced by Dan and Maz in Drive as Box moves to Melbourne to host breakfast with Dave Thornton, and Lund joins Sophie Monk, Merrick Watts and Mel B on 2DayFM breakfast in Sydney. [2]

Fifi and Jules team was made up of:

Sophie Charlene Akland Monk is an Australian singer, actress, model, and media personality. She was a member of the girl group Bardot, winners of the first season of Popstars Australia in 2000, and later released a solo album called Calendar Girl (2003). She has appeared in various films, including Date Movie (2006), Click (2006), Sex and Death 101 (2007), The Hills Run Red (2009), and Spring Breakdown (2009). Monk was the winner of the fourth season of The Celebrity Apprentice Australia in 2015, and in 2016, she was a judge on Australia's Got Talent. In 2017, she starred on the third season of The Bachelorette Australia, and the following year, she became the host of Love Island Australia. 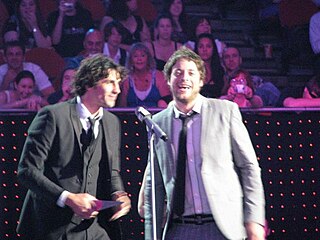 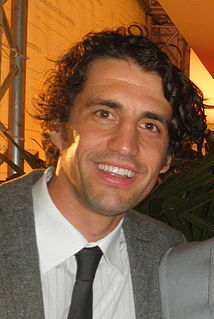 Jules Lund is an Australian television presenter from Melbourne and founder of TR|BE.

The Shebang was a radio show broadcast weekday mornings from 6am to 9am AEST in Sydney, Australia on 2MMM, the local Triple M outlet. It was hosted by Marty Sheargold, Fifi Box and Paul Murray with Anthony Maroon as the show anchor. The producer, Anna, was often chastised for her many mistakes.

The Hamish & Andy Show is an ongoing podcast and former Australian radio show created by and starring comedic duo Hamish Blake and Andy Lee. It began on Fox FM in 2006, and by 2007 it was broadcast on the Hit Network to every state in Australia, as well as the ACT, for two hours in the key weekday afternoon drive time slot until the end of 2010. It since took on a variety of timeslots and formats. It was also broadcast in New Zealand and Dubai as a weekly highlights package. In late 2009, a 3-hour special entitled "Hamish and Andy's Midwinter Warmer" was broadcast in the United Kingdom on BBC6 Music.