The collection consists of fifteen movements, some of which are grouped together. A typical performance lasts 13–15 minutes. The movement list is as follows:

In 1933, Bartók adapted and orchestrated movements 6-15 of the piano version of the piece as Hungarian Peasant Songs, Sz. 100, BB 107. [2] [3] While this version cuts the first five movements of the original and parts of the thirteenth, it also adds material, such as additional variations in movement 12. [4] This version of the piece is commonly known by its Hungarian name, Magyar parasztdalok ( [ˈmɒɟɒr ˈpɒrɒstˌdɒlok] ).

The work is scored for the following orchestra: [2] 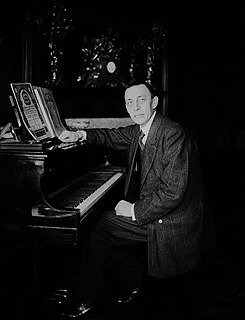 The Rhapsody on a Theme of Paganini, Op. 43, is a concertante work written by Sergei Rachmaninoff for piano and orchestra, closely resembling a piano concerto, all in a single movement. Rachmaninoff wrote the work at his summer home, the Villa Senar in Switzerland, according to the score, from 3 July to 18 August 1934. Rachmaninoff himself, a noted performer of his own works, played the piano part at the piece's premiere on 7 November 1934, at the Lyric Opera House in Baltimore, Maryland, with the Philadelphia Orchestra conducted by Leopold Stokowski. Rachmaninoff, Stokowski, and the Philadelphia Orchestra made the first recording, on 24 December 1934, at RCA Victor's Trinity Church Studio in Camden, New Jersey. The English premiere on 7 March 1935 at Manchester Free Trade Hall also featured Rachmaninoff with The Hallé under Nikolai Malko.

The Hungarian Dances by Johannes Brahms (WoO 1), are a set of 21 lively dance tunes based mostly on Hungarian themes, completed in 1879. They vary from about a minute to five minutes in length. They are among Brahms's most popular works and were the most profitable for him. Each dance has been arranged for a wide variety of instruments and ensembles. Brahms originally wrote the version for piano four hands and later arranged the first ten dances for solo piano.

"Csárdás" is a rhapsodical concert piece by the Italian composer Vittorio Monti. Written in 1904, the well-known folkloric piece is based on a Hungarian csárdás. It was originally composed for violin, mandolin, or piano. There are arrangements for orchestra and for a number of solo instruments. "Csárdás" is about four-and-a-half minutes in duration.

Ruralia hungarica is a name given by the Hungarian composer Ernő Dohnányi to four interrelated works.