Last updated May 07, 2021
Discrete analog of a derivative

Certain recurrence relations can be written as difference equations by replacing iteration notation with finite differences.

Finite differences were introduced by Brook Taylor in 1715 and have also been studied as abstract self-standing mathematical objects in works by George Boole (1860), L. M. Milne-Thomson (1933), and Károly Jordan (1939). Finite differences trace their origins back to one of Jost Bürgi's algorithms (c. 1592) and work by others including Isaac Newton. The formal calculus of finite differences can be viewed as an alternative to the calculus of infinitesimals. [4]

A forward difference is an expression of the form

A backward difference uses the function values at x and x − h, instead of the values at x + h and x:

Finally, the central difference is given by

Finite difference is often used as an approximation of the derivative, typically in numerical differentiation.

The derivative of a function f at a point x is defined by the limit.

If h has a fixed (non-zero) value instead of approaching zero, then the right-hand side of the above equation would be written

Hence, the forward difference divided by h approximates the derivative when h is small. The error in this approximation can be derived from Taylor's theorem. Assuming that f is differentiable, we have

The same formula holds for the backward difference:

Similarly we can apply other differencing formulas in a recursive manner.

More generally, the nth order forward, backward, and central differences are given by, respectively,

These equations use binomial coefficients after the summation sign shown as (n
i). Each row of Pascal's triangle provides the coefficient for each value of i.

Note that the central difference will, for odd n, have h multiplied by non-integers. This is often a problem because it amounts to changing the interval of discretization. The problem may be remedied taking the average of δn[ f ](x − h/2) and δn[ f ](x + h/2).

Forward differences applied to a sequence are sometimes called the binomial transform of the sequence, and have a number of interesting combinatorial properties. Forward differences may be evaluated using the Nörlund–Rice integral. The integral representation for these types of series is interesting, because the integral can often be evaluated using asymptotic expansion or saddle-point techniques; by contrast, the forward difference series can be extremely hard to evaluate numerically, because the binomial coefficients grow rapidly for large n.

The relationship of these higher-order differences with the respective derivatives is straightforward,

approximates f ′(x) up to a term of order h2. This can be proven by expanding the above expression in Taylor series, or by using the calculus of finite differences, explained below.

If necessary, the finite difference can be centered about any point by mixing forward, backward, and central differences.

Using linear algebra one can construct finite difference approximations which utilize an arbitrary number of points to the left and a (possibly different) number of points to the right of the evaluation point, for any order derivative. This involves solving a linear system such that the Taylor expansion of the sum of those points around the evaluation point best approximates the Taylor expansion of the desired derivative. Such formulas can be represented graphically on a hexagonal or diamond-shaped grid. [5]

This is useful for differentiating a function on a grid, where, as one approaches the edge of the grid, one must sample fewer and fewer points on one side.

The details are outlined in these notes.

The Finite Difference Coefficients Calculator constructs finite difference approximations for non-standard (and even non-integer) stencils given an arbitrary stencil and a desired derivative order.

Common applications of the finite difference method are in computational science and engineering disciplines, such as thermal engineering, fluid mechanics, etc.

The Newton series consists of the terms of the Newton forward difference equation, named after Isaac Newton; in essence, it is the Newton interpolation formula, first published in his Principia Mathematica in 1687, [6] namely the discrete analog of the continuous Taylor expansion,

. This is easily seen, as the sine function vanishes at integer multiples of

; the corresponding Newton series is identically zero, as all finite differences are zero in this case. Yet clearly, the sine function is not zero.). Here, the expression

is the binomial coefficient, and

is the "falling factorial" or "lower factorial", while the empty product (x)0 is defined to be 1. In this particular case, there is an assumption of unit steps for the changes in the values of x, h = 1 of the generalization below.

Note the formal correspondence of this result to Taylor's theorem. Historically, this, as well as the Chu–Vandermonde identity,

(following from it, and corresponding to the binomial theorem), are included in the observations that matured to the system of umbral calculus.

To illustrate how one may use Newton's formula in actual practice, consider the first few terms of doubling the Fibonacci sequence f = 2, 2, 4, ... One can find a polynomial that reproduces these values, by first computing a difference table, and then substituting the differences that correspond to x0 (underlined) into the formula as follows,

For the case of nonuniform steps in the values of x, Newton computes the divided differences,

the series of products,

and the resulting polynomial is the scalar product, [7]

The Newton series, together with the Stirling series and the Selberg series, is a special case of the general difference series, all of which are defined in terms of suitably scaled forward differences.

The forward difference can be considered as an operator, called the difference operator, which maps the function f to Δh[ f ]. [8] [9] This operator amounts to

The finite difference of higher orders can be defined in recursive manner as Δn
h ≡ Δh(Δn − 1
h). Another equivalent definition is Δn
h = [Th − I]n.

Formally applying the Taylor series with respect to h, yields the formula

where D denotes the continuum derivative operator, mapping f to its derivative f ′. The expansion is valid when both sides act on analytic functions, for sufficiently small h. Thus, Th = ehD, and formally inverting the exponential yields

This formula holds in the sense that both operators give the same result when applied to a polynomial.

Even for analytic functions, the series on the right is not guaranteed to converge; it may be an asymptotic series. However, it can be used to obtain more accurate approximations for the derivative. For instance, retaining the first two terms of the series yields the second-order approximation to f ′(x) mentioned at the end of the section Higher-order differences.

The analogous formulas for the backward and central difference operators are

The calculus of finite differences is related to the umbral calculus of combinatorics. This remarkably systematic correspondence is due to the identity of the commutators of the umbral quantities to their continuum analogs (h → 0 limits),

For instance, the umbral analog of a monomial xn is a generalization of the above falling factorial (Pochhammer k-symbol),

hence the above Newton interpolation formula (by matching coefficients in the expansion of an arbitrary function f (x) in such symbols), and so on.

For example, the umbral sine is

As in the continuum limit, the eigenfunction of Δh/h also happens to be an exponential,

Thus, for instance, the Dirac delta function maps to its umbral correspondent, the cardinal sine function,

and so forth. [11] Difference equations can often be solved with techniques very similar to those for solving differential equations.

Analogous to rules for finding the derivative, we have:

All of the above rules apply equally well to any difference operator, including ∇ as to Δ.

Finite differences can be considered in more than one variable. They are analogous to partial derivatives in several variables.

Some partial derivative approximations are:

Alternatively, for applications in which the computation of f is the most costly step, and both first and second derivatives must be computed, a more efficient formula for the last case is 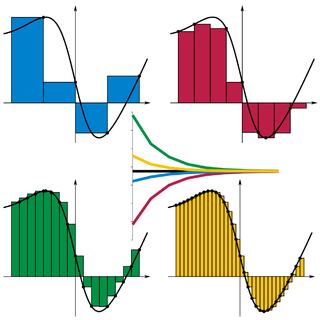 In mathematics, a Riemann sum is a certain kind of approximation of an integral by a finite sum. It is named after nineteenth century German mathematician Bernhard Riemann. One very common application is approximating the area of functions or lines on a graph, but also the length of curves and other approximations.

In mathematics before the 1970s, the term umbral calculus referred to the surprising similarity between seemingly unrelated polynomial equations and certain shadowy techniques used to 'prove' them. These techniques were introduced by John Blissard (1861) and are sometimes called Blissard's symbolic method. They are often attributed to Édouard Lucas, who used the technique extensively. 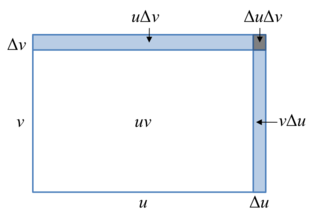 In calculus, the product rule is a formula used to find the derivatives of products of two or more functions. For two functions, it may be stated in Lagrange's notation as

In mathematics, the directional derivative of a multivariate differentiable function along a given vector v at a given point x intuitively represents the instantaneous rate of change of the function, moving through x with a velocity specified by v. It therefore generalizes the notion of a partial derivative, in which the rate of change is taken along one of the curvilinear coordinate curves, all other coordinates being constant.

In numerical analysis, finite-difference methods (FDM) are a class of numerical techniques for solving differential equations by approximating derivatives with finite differences. Both the spatial domain and time interval are discretized, or broken into a finite number of steps, and the value of the solution at these discrete points is approximated by solving algebraic equations containing finite differences and values from nearby points.