The First Cabinet of Donald Tusk was the government of Poland from November 16, 2007 to November 18, 2011 sitting in the Council of Ministers during the 6th legislature of the Sejm and the 7th legislature of the Senate. It was appointed by President Lech Kaczyński on November 16, 2007, and passed the vote of confidence in Sejm on November 24, 2007. Led by the centre-right politician Donald Tusk it was supported by the coalition of two parties: the liberal conservative Civic Platform (PO) and the agrarian Polish People's Party (PSL).

Civic Platform is a centre to centre-right political party in Poland. Since its creation, the party has shown stronger electoral performances in the City of Warsaw, the west, and the north of Poland.

The President of the Council of Ministers, colloquially referred to as the prime minister, is the leader of the cabinet and the head of government of Poland. The current responsibilities and traditions of the office stem from the creation of the contemporary Polish state, and the office is defined in the Constitution of 1997. According to the Constitution, the president of Poland nominates and appoints the prime minister, who will then propose the composition of the cabinet. Fourteen days following their appointment, the prime minister must submit a programme outlining the government's agenda to the Sejm, requiring a vote of confidence. Conflicts stemming from both interest and powers have arisen between the offices of President and Prime Minister in the past.

Donald Franciszek Tusk is a Polish politician who was President of the European Council from 2014 to 2019. He served as the 14th prime minister of Poland from 2007 to 2014 and was a co-founder and chairman of the Civic Platform political party. On 20 November 2019, Tusk was elected as the president of the European People's Party (EPP), Europe's largest transnational political party.

Presidential elections were held in Poland on 9 October and 13 October 2005. The outgoing President of Poland, Aleksander Kwaśniewski, had served two five-year terms and was unable to stand for a third term. Lech Kaczyński defeated Donald Tusk to become President of Poland.

Bogdan Andrzej Zdrojewski(listen) is a Polish politician and local government leader. He served as the mayor of Wrocław from 4 June 1990 to 1 September 2001, a Senator of the 4th legislature, and a Member of the Polish Parliament of the 4th, 5th, and 6th parliamentary term. From 2006 to 2007, Zdrojewski chaired the Parliamentary Delegation of Platforma Obywatelska, and from 2007 to 2014, served as Minister of Culture and National Heritage. Since 2014, he has been a Member of the European Parliament of the 8th legislature.

Małgorzata Maria Kidawa-Błońska, née Grabska is a Polish politician, film producer, and sociologist. She was Marshal of the Sejm from 25 June 2015 to 11 November 2015 at the end of the Seventh term's composition of the lower house, after which being voted a Deputy Marshal of the Eighth and Ninth term, each time nominated by the opposition party Civic Platform, under the marshalcy of Marek Kuchciński and Elżbieta Witek, respectively.

Ewa Bożena Kopacz is a Polish politician and a Vice-President of the European Parliament. She was Prime Minister of Poland and Marshal of the Sejm - the first woman to have held the latter post. In addition, she was Minister of Health from November 2007 until November 2011. Kopacz has been a member of the Civic Platform since 2001. Kopacz became Prime Minister on 22 September 2014, succeeding Donald Tusk; she is the second woman to hold the office after Hanna Suchocka. Prior to entering politics, she was a pediatrician and a general practitioner. Her term ended on 16 November 2015. 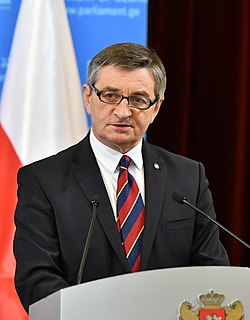 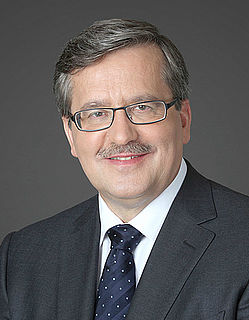 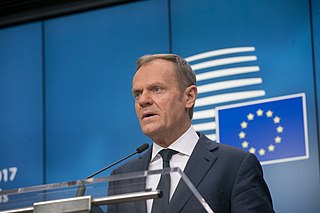 The Second Cabinet of Donald Tusk was the government of Poland from November 18, 2011 to September 22, 2014 sitting in the Council of Ministers during the 7th legislature of the Sejm and the 8th legislature of the Senate. It was appointed by President Bronisław Komorowski on November 18, 2011, and passed the vote of confidence in Sejm on November 19, 2011. Led by Donald Tusk, it is a centre-right coalition of two parties: Tusk's liberal conservative Civic Platform (PO) and the agrarian Polish People's Party (PSL). By law, all vacant ministries will be led by a Deputy Prime Minister in an acting position.

The Cabinet of Ewa Kopacz was the government of Poland from 22 September 2014 to 16 November 2015. It was appointed by President Bronisław Komorowski on 22 September 2014, and passed a vote of confidence in Sejm on 1 October 2014. Led by Ewa Kopacz, it is a centre-right coalition of two parties: liberal conservative Civic Platform (PO) and the agrarian Polish People's Party (PSL). Ewa Kopacz succeeded Donald Tusk, who was nominated as President of the European Council.

Jolanta Beata Fedak was a Polish politician who served as Minister of Labour and Social Policy from 2007 to 2011.