The Mexican Empire (Spanish : Imperio Mexicano, pronounced  [ĩmˈpeɾjo mexiˈkano] ( listen )) was a monarchy, and the first independent post-colonial imperial state in Mexico. It was the only former colony of the Spanish Empire to establish a monarchy after independence. Together with the Brazilian Empire and the two Haitian Empires, it was one of four European-style empires in the Americas; it lasted two years before transitioning into a federal republic.

It existed from the signing of the Treaty of Córdoba and the declaration of Independence of the Mexican Empire in September 1821 until the emperor's abdication in March 1823 when the Provisional Government took power and the First Mexican Republic was proclaimed in 1824. The monarch of the state was Agustín de Iturbide, reigning as Emperor Agustín I of Mexico. [4]

The various independentist factions in revolutionary Mexico coalesced around three principles, or "guarantees," for Mexican independence from Spain: that Mexico would be an independent constitutional monarchy governed by a conservative European prince; that Americanos, that is all those Mexican-born (regardless of previous racial category), and those peninsular-born would henceforth enjoy equal rights and privileges; and that the Roman Catholic Church would retain its privileges and position as the official and exclusive religion of the land. These Three Guarantees formed the core of the Plan of Iguala, the revolutionary blueprint which, by combining the goal of independence and a constitution with the preservation of Catholic monarchy, brought together all Mexican factions. [5] Under the 24 February 1821 Plan of Iguala, to which most of the provinces subscribed, the Mexican Congress established a regency council which was headed by Iturbide.

After signing the Declaration of Independence of the Mexican Empire of 28 September 1821, the Mexican Congress intended to establish a commonwealth, whereby King Fernando VII of Spain would also be Emperor of Mexico, and both countries would be governed by separate laws and form separate legislative bodies. If the king refused the position, the law provided for another member of the House of Bourbon to accede to the Mexican throne. However, the goal was merely a political tactic to appease the last royalists, and full independence was expected. [6] King Ferdinand, however, refused to recognize Mexico's independence and said that Spain would not allow any other European prince to take the throne of Mexico.

The Sovereign Mexican Constituent Congress decreed on June 22, 1822 [7] the following:

General Agustín de Iturbide, a Mexican criollo who had been a royalist officer and who had led the Army of the Three Guarantees in the final phases of the war, was elected head of the provisional government and of the regency which held the imperial power while a monarch was chosen. Iturbide was extremely popular after his successes in the war of independence, and in the evening of 18 May 1822 a mass demonstration led by the Regiment of Celaya, which Iturbide had commanded during the war, marched through the streets of Mexico City and demanded that their commander-in-chief accept the throne himself.

On 19 May 1822, Mexican Congress named Iturbide as a constitutional emperor. On 21 May it issued a decree confirming this appointment, which was officially a temporary measure until a European monarch could be found to rule Mexico. Iturbide's official title was, "By Divine Providence and the National Congress, First Constitutional Emperor of Mexico" (Spanish : Por la Divina Providencia y por el Congreso de la Nación, Primer Emperador Constitucional de México). His coronation took place on 21 July 1822 in Mexico City.

In August 1822 a plot to overthrow the monarchy was discovered and on August 25, plotters, including 16 members of Congress, were arrested. As factions in the Congress began to sharply criticise Iturbide and his policies, the emperor decided on 31 October to dissolve the body. [8] This led to provincial uprisings, the most important of which was in the garrison at Veracruz led by Antonio López de Santa Anna. Santa Anna and his troops revolted against Iturbide, calling for the restoration of the Congress on 1 December 1822. Santa Anna had secretly persuaded General Echávarri, the commander of the Imperial forces, to switch sides and support the revolution when it was ready to be proclaimed throughout Mexico. The independence heroes Vicente Guerrero, Nicolás Bravo and Guadalupe Victoria soon joined, signing the Plan of Casa Mata on February 1, 1823, which called for the restoration of the Congress.

The Plan of Casa Mata, which other Mexican generals, governors, and high-ranking governmental officials soon signed, did not recognize the First Mexican Empire and called for the convening of a new Constituent Congress. The insurrectionists sent their proposal to the provincial governments and requested their adherence to the plan. In the course of just six weeks, the Plan of Casa Mata traveled to such remote places as Texas, and almost all the provinces supported the plan. Each provincial government that accepted the plan thereby withdrew its allegiance from the Imperial government and assumed sovereignty within its own province. This left Emperor Agustín I isolated with little support outside of Mexico City and a few factions of the Imperial Army. Consequently, he reinstalled the Congress, which he had previously abolished, abdicated the throne, and fled the country on 19 March 1823. Santa Anna and the other proponents of the Plan of Casa Mata went on to oversee the drafting of a new constitution and the establishment of the First Mexican Republic the following year.

The territory of the Mexican Empire corresponded to the borders of Viceroyalty of New Spain, excluding the Captaincies General of Cuba, Santo Domingo and the Philippines. The Central American lands of the former Captaincy General of Guatemala were annexed to the Empire shortly after its establishment.[ citation needed ]

Under the First Empire, Mexico reached its greatest territorial extent, stretching from northern California to the provinces of Central America (excluding Panama, which was then part of Colombia), which had not initially approved becoming part of the Mexican Empire but joined the Empire shortly after their independence. [9]

After the emperor abdicated, on March 29 the departing Mexican general Vicente Filisola called for a new Central American Congress to convene and on July 1, 1823 the Central American provinces formed the Federal Republic of Central America, with only the province of Chiapas choosing to remain a part of Mexico as a state. Subsequent territorial evolution of Mexico over the next several decades (principally cessions to the United States) would eventually reduce Mexico to less than half its maximum extent.

The first Mexican empire was divided into the following intendances: 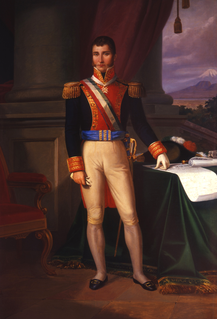 Agustín de Iturbide, in full Agustín Cosme Damián de Iturbide y Arámburu, also known as Augustine of Mexico, was a Mexican army general and politician. During the Mexican War of Independence, he built a successful political and military coalition that took control in Mexico City on 27 September 1821, decisively gaining independence for Mexico. After the secession of Mexico was secured, he was proclaimed President of the Regency in 1821. A year later, he was announced as the Constitutional Emperor of Mexico, reigning briefly from 19 May 1822 to 19 March 1823. He is credited as the original designer of the first Mexican flag.

The Plan of Iguala, also known as The Plan of the Three Guarantees or Act of Independence of North America, was a revolutionary proclamation promulgated on 24 February 1821, in the final stage of the Mexican War of Independence from Spain. The Plan stated that Mexico was to become a constitutional monarchy, whose sole official religion would be Roman Catholicism, in which the Peninsulares and Creoles of Mexico would enjoy equal political and social rights. It took its name from the city of Iguala in the modern-day state of Guerrero.

The Emperor of Mexico was the head of state and ruler of Mexico on two non-consecutive occasions in the 19th century. 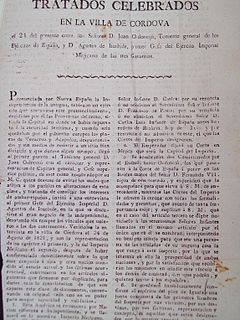 The Treaty of Córdoba established Mexican independence from Spain at the conclusion of the Mexican War of Independence. It was signed on August 24, 1821 in Córdoba, Veracruz, Mexico. The signatories were the head of the Army of the Three Guarantees, Agustín de Iturbide, and, acting on behalf of the Spanish government, Jefe Político Superior Juan O'Donojú. The treaty has 17 articles, which developed the proposals of the Plan of Iguala. The Treaty is the first document in which Spanish and Mexican officials accept the liberty of what will become the First Mexican Empire, but it is not today recognized as the foundational moment, since these ideas are often attributed to the Grito de Dolores. The treaty was rejected by the Spanish government. Spain did not recognize Mexico's independence until December 28, 1836. 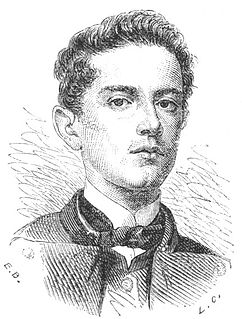 Salvador Agustín Francisco de Paula de Iturbide y Marzán was the grandson of Agustín de Iturbide, the first emperor of independent Mexico, and his consort Empress Ana María. He became the adopted son, along with his cousin Agustín de Iturbide y Green, of Mexico's only other royal heads of state—Emperor Maximilian I and Empress Carlota of Mexico.

Salvador María de Iturbide y Huarte was the eighth child of Agustín I of Mexico and Empress Ana Maria Huarte. He was married in 1845 to Doña María del Rosario de Marzán y Guisasola. His descendants, through his son Salvador de Iturbide y de Marzán, are the current pretenders to the Mexican Throne. He was in the Secretary Mexican Legation in Washington, D.C. in 1849.

Agustín Jerónimo de Iturbide y Huarte was the eldest son of the first Emperor of Mexico, Agustín I of Mexico. He was the heir apparent to the First Mexican Empire and a member of the Imperial House of Iturbide. Later in life, he served as a military officer in South America and also worked as a diplomat for the United Mexican States at the Mexican embassy in the United States and in London, after his military career had ended in South America.

The House of Iturbide is the former Imperial House of Mexico. It was founded by the Sovereign Mexican Constituent Congress on 22 June 1822 when the newly-independent Mexican congress confirmed Agustín I's title of Constitutional Emperor of Mexico. He was baptized with the names of Saints Cosmas and Damian at the cathedral there. The last name Iturbide was originally from the Basque Country, Spain.

Juana de Dios María Francisca Ramona Ignacia de Iturbide y Huarte, was the third child of Agustín I of Mexico and Empress Ana María. She died at a young age at the Georgetown Visitation Monastery in Washington, D.C..

Ana María Josefa Ramona Juana Nepomucena Marcelina Huarte y Muñiz was the first Empress of Mexico. She was the wife Emperor Agustín de Iturbide of Mexico. Her father was the provincial intendant Isidro Huarte and her mother was the noblewoman Manuela Muñiz y Sanchez de Tagle descendant of the Marquis of Altamira.

Sabina de Iturbide y Huarte was the daughter of Agustín de Iturbide and Ana María Huarte who received the title of Mexican Princess during the First Mexican Empire by the Constituent Congress.

The Prince Imperial of Mexico is the title created on June 22, 1822 by the Mexican Constituent Congress, to be granted to the firstborn and heir of Emperor Agustín de Iturbide. This title also refers to the heads of the Imperial House and designated to be the official title of the heir apparent to the imperial throne of Mexico. 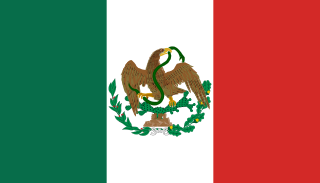 Prince of the Union was the title created June 22, 1822, by the Constituent Congress, to be granted to the father of the emperor Agustín de Iturbide. This title went to Don José Joaquín de Iturbide.

José Joaquín de Iturbide y Arregui was the father of Agustín de Iturbide who received the title of Prince of the Union during the First Mexican Empire by the Constituent Congress.