He started his football career at FC Drobeta, but soon he left them for Universitatea Craviova, where he played for seven years. [1] In the summer of 2002, Stoican moved to Romanian giants Dinamo București. [2]

While playing for Dinamo, Shakhtar Donetsk manager, Mircea Lucescu, spotted Stoican's abilities and brought him to the Ukrainian Premier League club in the summer of 2003. [3] He spent four years at Shakhtar before moving to Metalist Kharkiv. [4] He did not manage to find a place in the first team at Metalist and moved back to Dinamo București for the final year of his playing career. [5]

From 1999 to 2005, Stoican made 19 appearances for Romania, making his debut under coach Victor Pițurcă when he came as a substitute and replaced Dan Petrescu in a friendly against Cyprus which ended 2–2. [6] [7] [8] He played two games at the Euro 2004 qualifiers and six at the 2006 World Cup qualifiers. [6] Stoican's last game for the national team was a friendly against Nigeria which ended with a 3–0 victory. [6] [9]

In 2009, after ending his player career, Stoican was appointed manager of Liga III club Minerul Valea Copcii. For the 2010–11 season he moved to CSM Reșița, and in July 2011 he was appointed head coach of Dinamo II București. After only six months, he resigned from Dinamo II and took control of Chindia Târgoviște. [10] He left Chindia in September 2012, after a poor series of results. [11] In October 2012, Stoican became head coach at CS Mioveni, with the primary objective of helping the team gain promotion to Liga I. [12]

In August 2013, he came back to Dinamo II, now playing in the Liga III, with the objective of gaining promotion to Liga II. [13] On 22 September 2013, Stoican was appointed as head coach at the main squad of FC Dinamo București. His contract was ended by mutual agreement on 12 November 2014, when the club was placed sixth in Liga I and was eliminated from the Romanian Cup. [14] From March to May 2015, Stoican had another brief spell in charge of Dinamo. [15]

In the summer of 2017, after his ambitious stint at Pandurii Târgu Jiu almost saved them from relegation to Liga II, Stoican was appointed head coach at Politehnica Iași. [16] On 24 February 2018, in spite of a 0–1 loss to defending champions Viitorul Constanța, Stoican led Politehnica Iași to its first Liga I Championship play-off and to an eventual sixth-place finish at the end of the season. [17]

His daughter Lorena is a professional handball player who currently plays for SCM Craiova. [19]

Andrei Cristea is a Romanian professional footballer who plays for Politehnica Iași as a forward and currently the manager of Politehnica Iași. He is known for his pace and his range of passing, and represented the Romania national team from 2003 to 2010.

Laurențiu Daniel Rus is a Romanian professional footballer who plays for Universitatea Cluj. He is a versatile player, being able to play as a right winger, a midfielder or a right back. 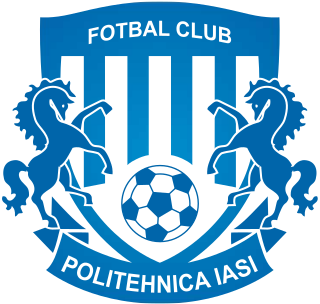 The 2012–13 Liga I was the ninety-fifth season of Liga I, the top-level football league of Romania. The season began on 21 July 2012 and ended on 30 May 2013. Steaua Bucharest were the defending champions.

The 2013–14 Liga I is the ninety-sixth season of Liga I, the top-level football league of Romania. The season began on 19 July 2013 and ended on 21 May 2014. Steaua București are the defending champions.

Narcis Iulian Bădic is a Romanian professional footballer who plays as a left back or a midfielder.

Patrick Mihai Petre is a Romanian professional footballer who plays as a winger for Liga III club Dacia Unirea Brăila.

The 2017–18 Liga I was the 100th season of the Liga I, the top professional league for Romanian association football clubs. The season began on 14 July 2017 and ended on 2 June 2018, being the third to take place since the play-off/play-out format has been introduced.

Marius Chelaru is a Romanian professional footballer who plays as a midfielder.

Ionuț Adrian Cioinac is a Romanian professional footballer who plays for ASU Politehnica Timișoara. A versatile player, Cioinac plays mainly as a mainly as a defensive midfielder, but he has also been deployed on numerous occasions as a centre-back.

Andrei Dumitru Sin is a Romanian professional footballer. A versatile player, Sin plays mainly as a left back, but he has also been deployed as a right back or a winger.

The 2019–20 Liga II was the 80th season of the Liga II, the second tier of the Romanian football league system. The season began on 3 August 2019 and ended on 2 August 2020. A total of 20 teams contested the league. It was the fourth Liga II season with a single series. The season was initially scheduled to be played in a round-robin tournament. The first two teams would be promoted to Liga I at the end of the season and the third-placed team would play a play-off match against the 12th-placed team from Liga I. The last five teams would relegate to Liga III.