Floris succeeded his father in 1222. His regent was Baldwin of Bentheim. He acquired the Land of Altena. He had constant disputes with the bishop of Utrecht, Otto II of Lippe, but helped him against the peasants of Drenthe in 1227. Floris fought in the crusade against the Stedinger north of Bremen in 1234.

On 19 July 1234, he was killed at a tournament in Corbie, France. He was buried at Rijnsburg Abbey.

Floris married, before 6 December 1224, his stepaunt Matilda, daughter of Duke Henry I of Brabant.

William II was the count of Holland and Zeeland from 1234 until his death. He was elected anti-king of Germany in 1248 and ruled as sole king from 1254 onwards. 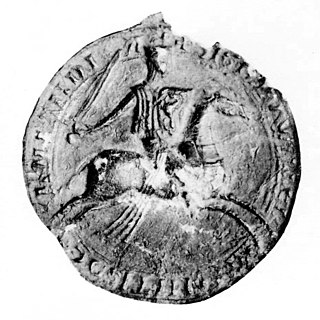 William I was the count of Holland from 1203 to 1222. He was the younger son of Floris III and Ada of Huntingdon.

Mathilde was the fourth child and daughter of Mathilde of Flanders and Henry I, Duke of Brabant. She married Henry II, Count Palatine of the Rhine in Aachen in 1212 and later married Floris IV, Count of Holland on 6 December 1224.