Punjabi folk music (Shahmukhi: پنجابی لوک موسیقی Punjabi : ਪੰਜਾਬੀ ਲੋਕ ਸੰਗੀਤ or Punjabi Folk) is the traditional music on the traditional musical instruments of the Punjab region of the Indian subcontinent. [1] [2] There is a great repertoire of music from the time of birth through the different stages of joy and sorrow till death. [3] The folk music invokes the traditions as well as the hardworking nature, bravery and many more things that the people of Punjab get from its gateway-to-India geographical location. Due to the large area with many sub-regions, the folk music has minor lingual differences but invokes the same feelings. The sub-regions, Malwa, Doaba, Majha, Pothohar, and hills areas, have numerous folk songs. [4] Punjabi dance OP Bhangra music which is a genre of Punjabi modern music invented in Britain by the Punjabi diaspora.

The rhythm of Punjabi folk music is very simple. [5] unlike the rhythms of Bhangra music which are generally complex

Punjab has folk songs on birth, marriage, funeral, death, love, separation, beauty, social and economical status, village lifestyle, food, nature, bravery, folklores and folktales, folk romances, folk and historical heroes, festivals and many more. [2] The songs of professional castes of Punjab are also included in the folk songs. They can be divided into the following categories:

Punjabi folk music is associated with a traditional lifestyle and culture. Many of the themes associated with the songs of today, which are mostly relevant in Bhangra songs, involve the promotion of the ills of Punjabi society such as the caste system and substance abuse as well as superstitious beliefs. Many revolutions in Punjab such as the Sikh revolution were in direct opposition of Punjabi folk songs.[ citation needed ]

A large part of Punjabi folk songs presents the picture of incidents from birth to death [4] relations, relatives also including the songs on other occasions, festivals and fairs. The songs by women represents their soft feelings, nature, hobbies and lower social status in limited circle while the songs by men represents their freedom, strength and hardworking. The folk songs starts from the birth of a child then name ceremony, marriage, relations, relatives and much more. There are many songs on the different stages of a marriage like Suhag, Ghorhian, Sehra, Sithnian. Suhag is related to bride while Ghorhian and Sehra are related to groom. A daughter's feelings have a special place in the Punjabi folk songs in which she address to his father asking to find her a better home, good people (in-laws) and many more. By length and mood, the different kinds of songs includes Suhag, [6] Ghorhian, Bolian, [7] Tappe, [8] Sithnian, [9] Chhand, [10] Heara, Lorian etc. [2] [4]

Every festive occasion has music associated with it. [3] Lohri and Maghi are associated with the change of season while Visakhi is a harvest festival. Men dance Bhangra and women dance Giddha. The month of Sawan is one of great joy for females in which they celebrate the festival of Teeyan. [3] The married ones come back to their parents' home and meet their family and friends and in an open ground they dance Giddha. They wear colorful dresses like Phulkari, and adorn their hands with Mehndi and glass bangles.

The other religions like Islam have Qawwalis, Naats and Hamds and Hinduism have Bhajans and Punjabi have Punjabi songs and Hindi songs. 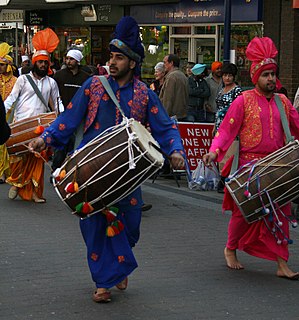 Dhol can refer to any one of a number of similar types of double-headed drum widely used, with regional variations, throughout the Indian subcontinent. Its range of distribution in India, Bangladesh and Pakistan primarily includes northern areas such as the Punjab, Haryana, Delhi, Kashmir, Sindh, Assam Valley, Uttarakhand, West Bengal, Odisha, Gujarat, Maharashtra, Konkan, Goa, Karnataka, Rajasthan, Bihar, Jharkhand and Uttar Pradesh. The range stretches westward as far as eastern Afghanistan. A related instrument is the dholak or dholki.

Giddha is a popular folk dance of women in Punjab region of India. The dance is often considered derived from the ancient dance known as the ring dance and is just as energetic as bhangra; at the same time it manages to creatively display feminine grace, elegance and flexibility. It is a highly colourful dance form which has spread to all regions of India. Women perform this dance mainly at festive or social occasions. The dance is accompanied by rhythmic clapping, with a typical traditional folk song performed by elder women in the background.

Music of Punjab reflects the traditions of the Punjab region of the Indian subcontinent, currently divided into two parts: East Punjab and West Punjab. The Punjab has diverse styles of music, ranging from folk and Sufi to classical, notably the Patiala gharana. While this style of music is, obviously, most popular in Punjab, it has seen popularity in many diverse and different areas of the world, such as Southern Ontario.

Lohri is a popular winter folk festival celebrated primarily in the Indian Subcontinent. The significance and legends about the Lohri festival are many and these link the festival to the Punjab region. It is believed by many that the festival marks the passing of the winter solstice. Lohri marks the end of winter, and is a traditional welcome of longer days and the sun's journey to the northern hemisphere by Hindus and Sikhs in the northern region of the Indian subcontinent. It is observed the night before Makar Sankranti, also known as Maghi, and according to the solar part of the lunisolar Vikrami calendar and typically falls about the same date every year.

Manmohan Waris is an Indian Punjabi folk/pop singer. He is the elder brother of record producer Sangtar and singer Kamal Heer. Waris is considered one of the most gifted singers of Punjabi folk music. 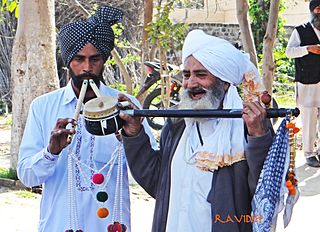 Dulla Bhatti is a folk hero who supposedly came from the Punjab region of medieval India and led a revolt against Mughal rule during the reign of the Mughal emperor Akbar. He is entirely absent from the recorded history of the time, and the only evidence of his existence comes from Punjabi folk songs. 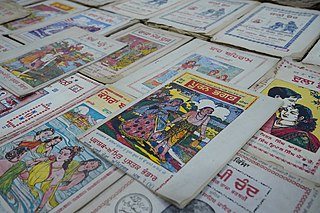 The culture of Punjab encompasses the spoken languages , written literature, cuisine, science, technology, military warfare, architecture, traditions, sacrifices, values and history of the Punjabi people native to the northern part of the Indian subcontinent. The term 'Punjabi' can mean both a person who lives in Punjab and also a speaker of the Punjabi language. This name originates from the Persian language 'panj', (five), and 'ab', (water). In Rigvedic times, this area was called Sapta Sindhu or 'Seven Rivers' illustrating the extent of Undivided Punjab. Indus River, and the five other rivers to the south eventually join Indus or merge into it later in the downstream of the Punjab valley. All the rivers start and flow out of the Himalayas. These other five rivers are Jhelum River, Chenab River, Ravi River, Beas River and Sutlej River. 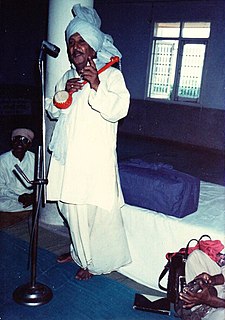 Sammi is a traditional dance form originating from the tribal communities of Punjab. The dance is popular in the Sandalbar area of Punjab, Pakistan. 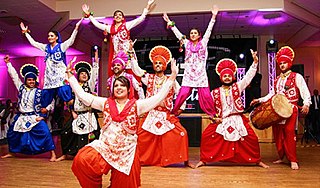 BhaṅgṛāIPA: [ˈpə̀ŋɡɽaː](listen)) is a type of traditional folk dance of the Indian subcontinent, originating in the Sialkot area of Punjab. It is done in the season of harvesting. In a typical performance, several dancers execute vigorous kicks, leaps, and bends of the body—often with upraised, thrusting arm or shoulder movements—to the accompaniment of short songs called boliyan and, most significantly, to the beat of a dhol. Struck with a heavy beater on one end and with a lighter stick on the other, the dhol imbues the music with a syncopated, swinging rhythmic character that has generally remained the hallmark of bhangra music. An energetic Punjabi dance, bhangra originated with Punjab farmers as a cultural and communal celebration; its modern-day evolution has allowed bhangra to retain its traditional Indian roots, while broadening its reach to include integration into popular music and DJing, group-based competitions, and even exercise and dance programs in schools and studios.

Amar Singh Shaunki, also spelled as Amar Singh Shonki, was a Dhadi singer of Punjab, India. People travelled miles to listen to him.