The Football Federation of Kosovo (Albanian : Federata e Futbollit e Kosovës; FFK) is the governing body of football in Kosovo, [a] [1] with headquarters in Pristina. The Football Federation of Kosovo was established in 1946 as a branch of the Football Association of Yugoslavia, [2] it has since become independent and was headed by Fadil Vokrri until his sudden death in 2018. It organizes eight competitions of football in Kosovo. [3]

On 17 February 2008. Kosovo declared independence from Serbia. A number of countries such as France, the United States and the United Kingdom immediately recognised the new country. Others, such as Serbia, Russia and the People's Republic of China are fiercely opposed to independence. [4]

On 6 May 2008, Kosovo applied for FIFA membership. "It's an historical moment for our country. We hope to be accepted", said Fadil Vokrri, president of the FFK[ citation needed ]. Kosovo's application was discussed at the FIFA Congress in Zurich in October 2008. FIFA rejected the membership application and denied Kosovo the right to play any friendly matches, as it was deemed not to comply with Article 10 of the FIFA Statutes, which states that only "an independent state recognized by the international community" may be admitted into FIFA. [5] [6] FIFA reverted that decision in 22 May 2012, stating that Kosovo may play other nations in international friendlies according to Article 79 of the FIFA Statutes. [7] The Football Association of Serbia protested and felt the decision by FIFA's executive committee "blatantly contravenes the FIFA statutes". [8] Three days later, permission was withdrawn by FIFA and a decision was delayed following pressure from the Football Association of Serbia and Michel Platini.

In September 2012, Albanian international Lorik Cana, along with Swiss internationals Xherdan Shaqiri, Granit Xhaka and Valon Behrami (all of whom are of Kosovar Albanian origin) wrote a declaration to the president of FIFA, Sepp Blatter, asking him to allow the Kosovo national team to be allowed to play friendly matches. The declaration was also signed by 5 other Albanian footballers. This came about as a consequence of the decision by FIFA not to allow the Kosovo team to play friendly matches against other national teams. In a meeting held in May 2012, FIFA decided to allow friendly matches to be played, a decision it later revoked following a strong protest issued by Football Association of Serbia. A new meeting was planned to be held at FIFA on 27 and 28 September same year in which the Kosovo issue was again planned to be discussed, which was then postponed until December. [9] [10]

In February 2013, FIFA announced that they would allow Kosovo to play against other nations in non-official competitions at youth and amateur level, female international level, and at club level providing that they did not display national symbols on the kit such as a national flag or play a Kosovar national anthem. If the FFK wished for Kosovo to play a game within the Kosovo region, they would require permission to play from the Football Association of Serbia. [11] The first competition that a Kosovar national team entered was the Valais Youth Cup in which the Kosovo Under 21 national team participated, losing on penalties after a 2–2 with Ghana and losing 8-0 to Egypt in the third place playoff.

The Football Associations of Serbia and Kosovo met with FIFA on 10 January 2014 to discuss whether Kosovo should be allowed to play friendlies against other FIFA member associations at full international level. On 13 January 2014, FIFA issued a public statement stating that Kosovo would be allowed to play international friendlies against full FIFA members. FIFA maintained that the Kosovar playing kit should not contain national symbols nor should a Kosovar national anthem be played. FIFA also required that they acted as the intermediary between Serbia and Kosovo, and Kosovo would need to give 21 days' notice should they wish to a host a game. [12]

Some football clubs, especially from North Kosovo, refuse to enter the Republic of Kosovo's institutions and continue to be part of Football Association of Serbia. The Serbian Zone League, the fourth tier of Serbian football, contains two leagues with clubs from Kosovo: Morava Zone League and League of North Kosovo.

In September 2015, UEFA announced that FFK's application for membership would be decided in May 2016. [13] In May 2016, FFK was approved to become a member of UEFA following a secret ballot at the 40th Ordinary Congress in Budapest. Following this, on 13 May 2016, Kosovo was voted into FIFA during their 66th congress in Mexico, with 141 votes in favour and 23 against; its existing UEFA membership was cited as a factor in the decision. [14] 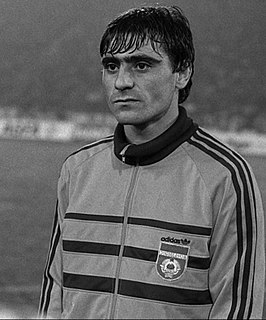 Fadil Avdullah Vokrri was a Yugoslav and later Kosovan football administrator and player. 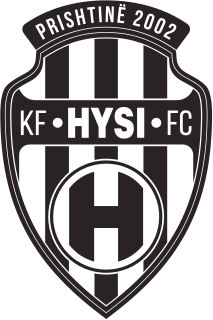 KF Hysi was a football club based in Podujevo, in the District of Pristina, Kosovo, that was founded in 2002.

Edmond Rugova is a Yugoslavian football coach and former football player. Rugova formerly coached the Kosovo national football team, a post he held since his appointment by the Football Federation of Kosovo in the summer of 2006 until his departure in July 2009. 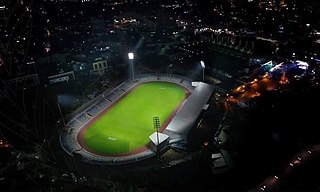 The Fadil Vokrri Stadium, previously known as Prishtina City Stadium, is a multi-purpose stadium in Prishtina, Kosovo, which is used mostly for football matches and is the home ground of FC Prishtina and Kosovo national football team. The stadium has a capacity of 13,500.

Kosovo vs Haiti was the first international match involving the Kosovar national football team to be recognised by FIFA, and the first to take place within Kosovo. The match was an international friendly between representative teams from Kosovo and Haiti.

This is a list of Kosovo national football team results from 1993 to 2019.

The Kosovo women's national football team represents Kosovo in international women's football and is controlled by the Football Federation of Kosovo.

The Kosovo national futsal team represents Kosovo in international men's futsal. It is controlled by the Football Federation of Kosovo, the governing body for football in Kosovo, which also controls futsal.

This is a list of Kosovo women's national football team results from 2017 to 2019.

This is a list of Kosovo national football team results from 2020 to 2029. 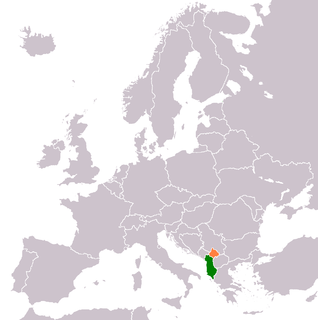 Brotherly derby, also known as the Brotherly is the name given in football to any match between the men's national senior football team of Albania and Kosovo.