Football in Kosovo [a] is governed by the Football Federation of Kosovo, which was created in 1946, as a branch of the Yugoslav Football Association. Prishtina, is the club from Kosovo with most participations in the Yugoslav First League. Football is the most popular sport in Kosovo.

The Football Superleague of Kosovo is the top division of football in Kosovo. The division was set up in 1945 as a regional league within the Yugoslav football league system.

In 2008, Kosovo [a] declared its independence from Serbia. Until 2016, membership in UEFA and FIFA had been denied due to Kosovo's disputed recognition as an independent state. However, Kosovo was also not a member of the NF Board, which represents non-FIFA territories, including unrepresented cultural groups and unrecognized states. Some football clubs, especially from North Kosovo, refuse to enter the Republic of Kosovo's institutions and continue to be part of the Football Association of Serbia. On 3 May 2016, Kosovo became the 55th member of UEFA after a 28-24 vote in their favour, and on 13 May 2016, Kosovo gained FIFA membership after a 141-23 vote in their favour.

The first football clubs in Kosovo were formed after the First World War and they competed in the Belgrade Football Subassociation provincial leagues within the Yugoslav football league system.

During the Second World War, Yugoslavia was invaded by Axis powers, and most of Kosovo became part of German- Italian-dominated Albanian Kingdom. Several city teams from Kosovo played during the war in the Albanian championship. Two Kosovar Albanian players made headlines in Italian Serie A, Riza Lushta and Naim Kryeziu. [1]

In 1945, Kosovo was reintegrated into Serbia and Yugoslavia. Football Federation of Kosovo was founded in 1946 and in 1948 was co-founder of ex-FF of Yugoslavia with equal rights and duties until 1991. FC Prishtina and FK Trepča made it to the Yugoslav First League. In 1992 SFR Yugoslavia became FR Yugoslavia. In that period, all Albanian football players abandoned the Yugoslavian league and were part of the Independent League of Kosovo (1991) and first played match was Flamurtari - Prishtina(13 September 1991). First goal of Independent league was scored by Eroll Salihu, actually General Secretary of FFK.

During this Yugoslav period most of the best players from Kosovo, regardless if Serb or Albanian, usually continued their career in stronger Yugoslav clubs. Examples are Gorani Fahrudin Jusufi (European vice-champion in 1966 with Partizan), Albanians Xhevat Prekazi, Fadil Vokrri, Isa Sadriu, Agim Cana, Ardian Kozniku and Kujtim Shala, Serbs Stevan Stojanović (goalkeeper of Red Star Belgrade when they won the European and world club title in 1991), Goran Đorović, Marko Perović, Darko Spalević, Nenad Vanić, Milan Biševac, Miloš Krasić and others. While all Kosovar Serbian and most Kosovar Albanian players represented Yugoslavia internationally, some opted to represent Albania, like Besnik Hasi or Mehmet Dragusha.

Three football players that were born in Kosovo (Milutin Šoškić, Fahrudin Jusufi, Vladimir Durković) were part of the Yugoslavia national football team, who won the gold medal at the 1960 Summer Olympics and the silver medal at the 1960 European Championship

After the Kosovo War in 1999, most Kosovar Albanian players opted for emigration and represented either the countries they emigrated in, or Albania. Some of them are Arjan Beqaj, Etrit Berisha, Lorik Cana, Debatik Curri, Armend Dallku, Besnik Hasi for Albania, Mehmet and Perparim Hetemaj, Njazi and Shefki Kuqi for Finland, Fatos Beqiraj, Jovan Tanasijević for Montenegro, Ardian Gashi for Norway, Emir Bajrami and Erton Fejzullahu for Sweden, Valon Behrami, Albert Bunjaku, Milaim Rama, Xherdan Shaqiri and Granit Xhaka for Switzerland

The Kosovo national football team was formed in the early 1990s and has played a number of friendly games. From 2014 to 2016, they played a number of matches recognised by FIFA, and from 2016 on, official FIFA matches. Their first competitive game was a 1-1 draw away to Finland in a World Cup qualifier.

The most famous player in women's football from Kosovo is the former German international Fatmire Alushi, who last played for French side Paris Saint-Germain, she is married to Enis Alushi, a former Kosovo international.

Dževad Prekazi is a former Yugoslav footballer who played as a midfielder. He also holds Turkish citizenship.

Lorik Agim Cana is an Albanian former professional footballer. He is currently the Grassroots ambassador for children's football in Albania, named by the Albanian Football Association on 26 October 2017.

Klubi Futbollistik Trepça, commonly known as Trepça, is a football club based in the southern part of Mitrovica, Kosovo. The club was founded in 1932. The club is not to be confused with FK Trepča, which plays in Serbian football league system.

Debatik Curri is an Albanian professional football coach and former player who is the current assistant manager of Prishtina.

The Football Superleague of Kosovo is the top level of the Kosovar football league system. The Superleague is organized by the Football Federation of Kosovo and the division currently has a 10-team format. The clubs play each other four times during the season for a 36-match schedule. At the end of the season, the bottom two teams in the division are relegated to the second tier, First Football League of Kosovo. 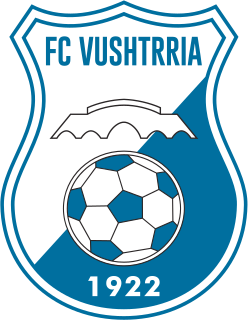 KF Vushtrria is a football club based in Vučitrn, Kosovo. The club was founded in 1922, and currently play their home games at the Ferki Aliu Stadium in the city of Vučitrn which has a capacity of 6,000 supporters.The most notable players to have played for the club and have been former Albania internationals Armend Dallku, Ahmed Januzi and Kosovo international Milot Rashica, Besnik Kollari. 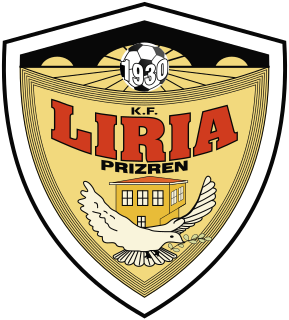 Klubi Futbollistik Liria, commonly known as Liria, is a professional football club based in Prizren, Kosovo. The club play in the First Football League of Kosovo, which is the second tier of football in the country.

Agim Cana is a Kosovan former professional footballer who played as a midfielder. He represented Yugoslavia internationally at youth level. 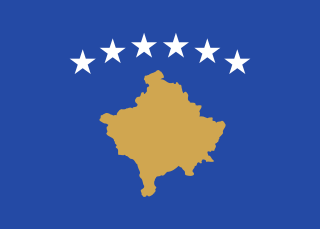 Sport in Kosovo has a long tradition and plays a prominent role in the society. Popular sports in Kosovo are among others football, basketball, volleyball, handball, and rugby. Whereas, major individual sports include wrestling, judo, swimming, boxing, karate and skiing.

The Albanians in Switzerland refers to the Albanian migrants in Switzerland and their descendants. They mostly trace their origins to Kosovo, North Macedonia and to a lesser extent to Albania and other Albanian-speaking territories in the Balkan Peninsula. Their exact number is difficult to determine as some ethnic Albanians holds North Macedonian, Serbian or another Former Yugoslavian citizenship.

Kosovo vs Haiti was the first international match involving the Kosovar national football team to be recognised by FIFA, and the first to take place within Kosovo. The match was an international friendly between representative teams from Kosovo and Haiti.

This is a list of Kosovo national football team results from 1942 to 1975.