Football is the most popular sport in Romania. [1] The Romanian Football Federation (Romanian : Federaţia Română de Fotbal or FRF), a member of UEFA, is the sport's national governing body.

Professional league football began in Romania as Divizia A in 1909. The name of the top-flight league was changed to Liga I before the 2006–07 season. Currently, domestic play is organized in a four tier league system comprising Liga I, Liga II, Liga III, and various county leagues. [2]

The country's top-flight division is Liga I. The league contains 18 teams, with the champion going into the 3rd qualify round in the UEFA Champions League. The runner-up starts in the second qualify round in the UEFA Europa League, where the 3rd enter the first qualify round. Steaua București is the most successful club in the history of Liga I, having won 23 league championships and being runner-up 12 times. Dinamo București is the only other club with sustained success in Liga I, having won 18 titles. The four clubs at the bottom of the league table are relegated to Liga II.

Liga II is divided into two parallel divisions due to economic and logistic reasons, each division containing 16 teams. The top two teams in each division are promoted to Liga I, while the bottom three teams from each division are relegated to Liga III. The second division is currently undergoing format changes, and is expected to consist of a single division of 20-22 teams in the near future. [3]

Liga III contains 108 teams split into six divisions of 18 teams each. The top club from each division is promoted to Liga II. Additionally, two separate three-team playoffs are held involving the second placed clubs from each division, with the playoff winners also being promoted. The bottom three teams from each division are relegated to the county leagues in addition to three of the 15th-placed teams.

The Romania national football team played its first match in 1922 and is one of only four national teams to have taken part in the first three World Cups, the other three being Brazil, France, and Belgium. Overall, they have played in seven World Cups, most recently in 1998. They have also competed in four European Championships, most recently in 2016. The team's most successful period was in the 1990s when, led by Gheorghe Hagi, they reached the quarterfinals of the 1994 World Cup. They also reached the last 16 of the 1998 World Cup, and the quarter-finals of Euro 2000.

Dissolved traditional teams were usually re-founded by supporters' associations or by municipalities. The fact that they bore similar names and colors to the original teams made the neutral fans to call them "clones". [5] Some of these teams later re-gained the record and official name of the original ones.

On top of this situation, the country's most successful team, Steaua București, lost the right to use its name (and logo) and changed it to FCSB.

Fotbal Club FCSB, commonly known as FCSB, is a Romanian professional football club based in Bucharest. It has spent its entire history in the Romanian highest tier, the Liga I.

Daniel Dumitru Coman is a Romanian former footballer who played as a goalkeeper and the current chairman of Hermannstadt.

Daniel Claudiu Prodan was a Romanian footballer who played mainly as a central defender. 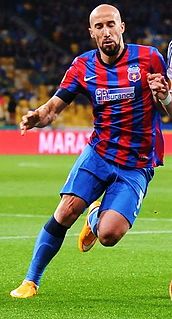 Iasmin Latovlevici is a Romanian professional footballer who plays as a left back for Liga I club CFR Cluj.

Ionuț Alin Rada is a Romanian footballer who plays as a central defender for Liga III side Sănătatea Cluj.

Daniel Ionuț Isăilă is a Romanian retired footballer and current manager of Baniyas.

Marius George Țucudean is a Romanian former professional footballer who played as a striker.

Fotbal Club Politehnica Timișoara, commonly known as Politehnica Timișoara or simply Poli Timișoara, was a Romanian football club from Timișoara, Timiș County, established in 1921 and dissolved in September 2012. During its existence, the team won two Cupa României and was runner-up twice in the Liga I. It amassed 49 seasons in the latter competition.