Forez is a former province of France, corresponding approximately to the central part of the modern Loire département and a part of the Haute-Loire and Puy-de-Dôme départements.

The final "z" in Forez (French pronunciation: ​ [fɔʁɛ] ) is not pronounced in the Loire département; however, it is pronounced in the western part of the former province, essentially when referring to the correspondent Forez Mountains (on the border between Puy-de-Dôme and Loire. The name is derived from the city of Feurs. Franco-Provençal is the language that was historically spoken in the region.

The city of Montbrison, Loire is considered the historical capital of the Forez.

Residents of the Forez are called Foréziens.

The rue du Forez in the third arrondissement of Paris was built in the late 16th century and appears on Turgot's map of Paris.

The origins of the county of Forez are obscure. There are several early figures who are sometimes supposed to have been counts of Forez. Whether these are considered counts or not can affect the numbering offered for the later counts.

The counts of Forez were also counts of Lyon in the Empire until 1173, when the countship of Lyon passed to the Archbishop of Lyon.

United to the French crown permanently in 1574.

The counts of Nevers were the rulers of the County of Nevers, which became a French duchy in 1539.

Saint-Romain-le-Puy is a commune in the Loire department in central France.

The Île Barbe is an island situated in the middle of the Saône, in the 9th arrondissement de Lyon, the quartier Saint-Rambert-l'Île-Barbe. Its name comes from the Latin insula barbara, "Barbarians' Island", suggesting that it was one of the last locales to be occupied.

Anne of Auvergne also known as Anna d'Auvergne was Sovereign Dauphine of Auvergne 1400-1417 and Countess of Forez in 1372-1417 as well as Dame de Mercoeur from 1400 and 1417. She was also Duchess of Bourbon by marriage to Louis II, Duke of Bourbon.

Guigues IV or Guy IV was the count of Forez, Auxerre and Tonnerre from 1203 and the count of Nevers from 1226. He was still a child when his father, Guigues III, died on the Fourth Crusade and he inherited Forez. His mother was Alix and his uncle, Renaud, archbishop of Lyon, acted as regent until he came of age in 1218. 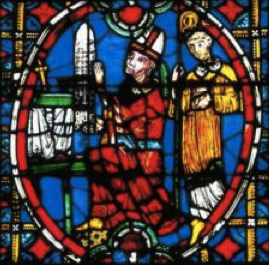 Renaud de Forez was a French churchman who was Archbishop of Lyon as Renaud II (1193–1226). A son of Count Guigues II of Forez, Renaud acted as regent of the county of Forez for his nephew, Guigues IV, between 1203 and 1218. He joined the Lyon chapter during the episcopate of Guichard of Pontigny. He became abbot of Saint-Just in 1182.

Guigues III, also numbered Guigues IV, nicknamed Branda, was the count of Forez from 1199 until his death while on the Fourth Crusade.