Forli (1963 – 1988) was an Argentinian Thoroughbred racehorse and sire. He was unbeaten in his native country, winning the Argentinian Triple Crown and being named Horse of the Year in 1966. He was imported to the United States in 1967 and won two of his three races before he was retired from racing. He stood as a breeding stallion in Kentucky and had considerable success as a sire of winners: he had a long-term influence on racing through his daughter Special, an influential broodmare. Forli died in 1988.

Forli was a chestnut horse bred in Argentina by the Haras Ojo de Agua. He was sired by Aristophanes, a British stallion imported to Argentina after having shown good, but unexceptional form in his native country. He made a great impact as a breeding stallion and was the Leading sire in Argentina in 1960. [2] Forli's dam Trevisa was a successful broodmare and a half sister to La Dogana, whose descendants included Crow. [3] Forli was first raced in the ownership of Jorge Azevedo and was trained in Argentina by Juan Lapistoy.

In 1967 Forli was bought by Arthur B. Hancock, Jr. of Claiborne Farm for $60,000, [5] and was transferred to the United States where he was trained by Charles E. Whittingham. He won on his North American debut setting a track record of 1:41.2 when winning the Coronado Handicap over eight and a half furlongs at Hollywood Park Racetrack in May. Forli then developed leg problems and was pinfired before returning to win an exhibition race at Hollywood in July. [6] He suffered his first and only defeat in the Citation Handicap at Arlington Park when he finished second to Dominar.

Forli was retired from racing to become a breeding stallion at Claiborne. He died in 1988 and was buried at Claiborne Farm. [7] His notable progeny included:

Lemon Drop Kid is an American Thoroughbred racehorse and sire. Best known for winning the 1999 Belmont Stakes, he was also the champion older horse of 2000 after winning the Brooklyn, Suburban, Whitney Handicaps and the Woodward Stakes.

Blenheim (1927–1958), also known as Blenheim II, was a British Thoroughbred race horse who won The Derby in 1930. As sire, he had a major influence on pedigrees around the world. Blenheim was highly tried, by European standards, as a two-year-old in 1929, winning four of his seven races. In the following season he was beaten in his first two races before recording an upset 18/1 win in the Derby. His racing career was ended by injury soon afterwards, and he was retired to stud, where he became an extremely successful and influential breeding stallion, both in Europe and North America.

Turkoman was an American Thoroughbred racehorse and sire.

Nodouble (1965–1990) was an American Thoroughbred racehorse and sire. In a career that lasted from 1967 to 1970, he won eleven races from across the country, including the Arkansas Derby, Hawthorne Gold Cup (twice) and the Santa Anita, Brooklyn and Metropolitan Handicaps. He was twice voted American Champion Older Male Horse by the Thoroughbred Racing Association. After retirement to stud, he became the leading sire in North America of 1981 and was also a notable broodmare sire. 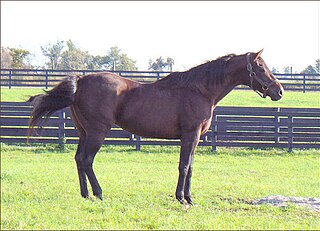 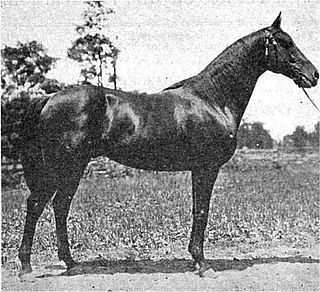 Delhi (1901–1925) was an American Thoroughbred racehorse that won the 1904 Belmont Stakes. He was the top money-winner of 1904 and was consequently named the co-historical American Champion Three-Year-Old Male Horse with Ort Wells. The following year, he was also the historical American Champion Older Male Horse, co-champion once again with Ort Wells. While Delhi did have limited success in the stud, he is not considered to be an influential sire. 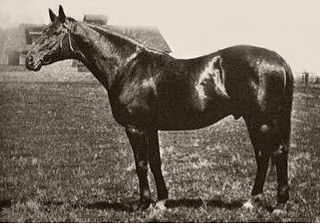 Miswaki was an American bred Thoroughbred racehorse who was a Group One winner in France as well as a stakes race winner in the United States. He was an important sire of 97 stakes race winners and was the Leading broodmare sire in Great Britain & Ireland in 1999 and 2001.

Thatch (1970–1983) was an American-bred, Irish-trained Thoroughbred racehorse and sire. In a racing career which lasted from spring 1972 until July 1973 he ran nine times and won seven races. As a two-year-old he won three of his four races and was rated one of the best Irish juveniles of the season. In the following year he finished fourth on soft ground in the 2000 Guineas but in the summer he showed the form which led to him being rated the best European horse of his generation, winning the St. James's Palace Stakes, the July Cup and the Sussex Stakes. He was then retired to stud where he had some success as a sire of winners.

Combat (1944–1967) was an undefeated British Thoroughbred racehorse and sire. Despite winning all nine of his reces, his career was largely overshadowed by that of his more celebrated stablemate Tudor Minstrel. He won all four of his races as a two-year-old in 1946 and all five in the following year including the Blue Riband Trial Stakes, Rous Memorial Stakes and Sussex Stakes. He was then retired to stud where he had limited success as a sire of winners. He died in 1967.

Lear Fan was an American-bred, British-trained Thoroughbred racehorse and sire. One of an exceptionally strong generation of European racehorses he was one of the leading two-year-olds when he was unbeaten in three races including the Champagne Stakes. In the following year he defeated Rainbow Quest in the Craven Stakes before finishing third to El Gran Senor and Chief Singer in the 2000 Guineas. He recorded his most valuable success later that year when defeating Palace Music in the Prix Jacques Le Marois. At the end of his three-year-old season he was retired to stud in Kentucky where he proved to be a successful sire of winners. He was retired from stud duty in 2004 and died four years later.

Cellini was an American-bred, Irish-trained Thoroughbred racehorse and sire. Bred in Kentucky he was sold for $240,000 as a yearling and sent to race in Europe. In 1973 he was one of the best colts of his generation in Britain and Ireland, winning all three of his races including the National Stakes and the Dewhurst Stakes. In the following spring he won the Vauxhall Trial Stakes and the Tetrarch Stakes but was beaten when favourite for both the Irish 2,000 Guineas and the St James's Palace Stakes. He was then retired to stud but proved infertile and was returned to the track, winning one minor race in 1976.

Polemarch was a British Thoroughbred racehorse and sire. He showed considerable promise as a two-year-old in 1920 when he won the Gimcrack Stakes and the Rous Plate as well as finishing third in the Middle Park Stakes. In the following year he won the Knowsley Dinner Stakes and the Great Northern Leger but appeared to have been exposed as some way short of top class before he recorded a 50/1 upset victory in the St Leger. In 1922 he became increasingly temperamental and difficult to manage and failed to win or place in five starts. He was then sold and exported to Argentina where he had considerable success of a breeding stallion.

Miss Disco (1944-1974) was an American Thoroughbred racemare that won important sprint events against colts during her racing career but who secured her place in history when, as a broodmare at Claiborne Farm, she was bred to Nasrullah and produced the very influential National Champion and Hall of Fame sire Bold Ruler.