The Former Yan (Chinese :前燕; pinyin :Qián Yān; 337–370) was a dynastic state ruled by the Xianbei during the era of Sixteen Kingdoms in China.

Initially, Murong Huang and his son Murong Jun claimed the Jin dynasty-created title "Prince of Yan," but subsequently, in 352, after seizing most of the former Later Zhao territory, Murong Jun would declare himself emperor, and after that point, the rulers of the Former Yan declared themselves "emperors".

During the winter of 342, the Xianbei of Former Yan, ruled by the Murong clan, attacked and destroyed Goguryeo's capital, Hwando, capturing 50,000 Goguryeo men and women to use as slave labor in addition to taking the queen mother and queen prisoner, [7] and forced King Gogukwon to flee for a while. The Xianbei also devastated Buyeo in 346, accelerating Buyeo migration to the Korean peninsula. [8]

Rulers of the Former Yan 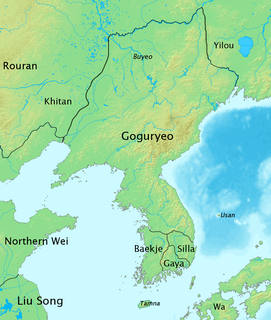 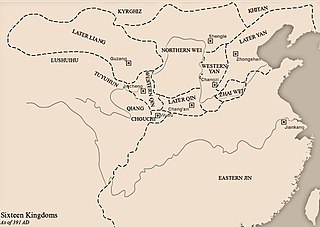 The Later Yan was a Murong–Xianbei state, located in modern-day northeast China, during the era of Sixteen Kingdoms in China.

The Northern Yan, also known in some historical texts as the Eastern Yan, was a dynastic state during the era of Sixteen Kingdoms in northern China. Some historians consider Gao Yun, a member of the Goguryeo royal family, to be the first Northern Yan monarch, while others consider Feng Ba of Han Chinese ethnicity to be the founder.

The Western Yan was a state of Xianbei ethnicity during the era of Sixteen Kingdoms in China. It was founded by Murong Hong in 384 in the aftermaths of Former Qin's defeat by Jin dynasty (266–420) at the Battle of Fei River, with the stated intent of permitting the Xianbei, whom Former Qin's emperor Fu Jiān had relocated to Former Qin's capital region after destroying Former Yan in 370. It initially also was intended to rescue the last Former Yan emperor Murong Wei, until he was executed by Fu Jiān in 385. It was a state that was characterized by extreme political instability and internal fighting, as all seven of its rulers died of unnatural causes. After eviscerating Former Qin, the people of the state abandoned the Guanzhong region and headed east back toward their homeland, but eventually settled down in modern Shanxi. It was destroyed in 394 as Later Yan's emperor Murong Chui wanted to reunite the people formerly of Yan and conquered it.

King Gogugwon of Goguryeo was the 16th king of Goguryeo, the northernmost of the Three Kingdoms of Korea. He was the son of King Micheon and Lady Ju.

Yuan Zhao (元釗), also known in history as Youzhu, was briefly an emperor of the Xianbei-led Chinese Northern Wei dynasty.

Lingyan Pavilion was a small tower beside Sanqing Hall (三清殿) in the southwest of Taiji Palace (太極宮), Chang'an, the capital of the Tang dynasty. Its location in modern China is roughly in the north of Xi'an, Shaanxi.

Hwando is a mountain fortress of the ancient Korean kingdom of Goguryeo, built to protect Goguryeo's second capital, Gungnae. It is located in present-day Ji'an city of the province of Jilin, China.

Jiang Ke (姜恪), formally the Duke of Yong'an (永安公), was an official and general of the Chinese dynasty Tang Dynasty, serving as chancellor for several years during the reign of Emperor Gaozong.

Xin Maojiang (辛茂將) was a Chinese general and politician of the Tang Dynasty, serving as chancellor for about a year during the reign of Emperor Gaozong.

Ren Yaxiang was a Chinese military general and politician during the Tang Dynasty, serving as chancellor during the reign of Emperor Gaozong.

Lai Heng (來恆) was an official of the Chinese dynasty Tang Dynasty, serving as chancellor during the reign of Emperor Gaozong.

Li Lin (李璘), né Li Ze (李澤), formally the Prince of Yong (永王), was an imperial prince of the Chinese dynasty Tang Dynasty. He was a son of Emperor Xuanzong, and after the general An Lushan had rebelled against Emperor Xuanzong's rule in 755, Li Lin tried to occupy the region south of the Yangtze River and establish a separate regime, but was defeated and killed.

Empress Dowager Wang, formally Empress Zhuangxian, was an empress dowager of the Chinese Tang Dynasty. She was the mother of Emperor Xianzong.

Li Qi (李錡) was a military governor (Jiedushi) of the Chinese dynasty Tang Dynasty, governing Zhenhai Circuit. In 807, he rebelled against the authority of Emperor Xianzong, but he was quickly defeated and captured by his own subordinates who turned against him, and he was delivered to the capital Chang'an and executed.

Li Cunjin (李存進), originally Sun Chongjin (孫重進), was a military general in imperial China's Tang Dynasty, and later the Jin territory in the ensuing Five Dynasties and Ten Kingdoms period after Tang's collapse. He served the Shatuo leaders Li Keyong — who adopted him as a son — and Li Keyong's biological son and successor Li Cunxu. He died in the battles against Zhang Chujin.