The formes fixes (French:  [fɔʁm fiks] ; singular: forme fixe, "fixed form") are the three 14th- and 15th-century French poetic forms: the ballade , rondeau , and virelai . Each was also a musical form, generally a chanson , and all consisted of a complex pattern of repetition of verses and a refrain with musical content in two main sections.

All three forms can be found in 13th-century sources, but a 15th-century source gives Philippe de Vitry as their first composer while the first comprehensive repertory of these forms was written by Guillaume de Machaut. [1] The formes fixes stopped being used in music around the end of the 15th century, although their influence continued (in poetry they, especially the rondeau, continued to be used [1] ).

Sometimes forms from other countries and periods are referred to as formes fixes. These include the Italian 14th-century madrigal and later ballata and barzelletta, the German bar form, Spanish 13th-century cantiga, and the later canción, and villancico. [1] 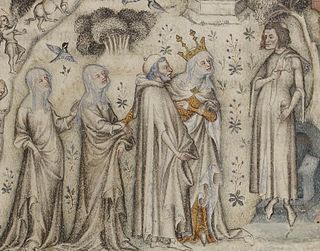 Guillaume de Machaut was a French composer and poet who was the central figure of the ars nova style in late medieval music. His dominance of the genre is such that modern musicologists use his death to separate the ars nova from the subsequent ars subtilior movement. Regarded as the most significant French composer and poet of the 14th century, he is often seen as the century's leading European composer.

Rondo is an instrumental musical form introduced in the Classical period.

A chanson is generally any lyric-driven French song, though it most often refers to the polyphonic French song of late medieval and Renaissance music. The genre had origins in the monophonic songs of troubadours and trouvères, though the only polyphonic precedents were 16 works by Adam de la Halle and one by Jehan de Lescurel. Not until the ars nova composer Guillaume de Machaut did any composer write a significant number of polyphonic chansons.

Ars nova refers to a musical style which flourished in the Kingdom of France and its surroundings during the Late Middle Ages. More particularly, it refers to the period between the preparation of the Roman de Fauvel (1310s) and the death of composer Guillaume de Machaut in 1377. The term is sometimes used more generally to refer to all European polyphonic music of the fourteenth century. For instance, the term "Italian ars nova" is sometimes used to denote the music of Francesco Landini and his compatriots, although Trecento music is the more common term for the contemporary 14th-century music in Italy. The "ars" in "ars nova" can be read as "technique", or "style". The term was first used in two musical treatises, titled Ars novae musicae by Johannes de Muris, and a collection of writings attributed to Philippe de Vitry often simply called "Ars nova" today. Musicologist Johannes Wolf first applied to the term as description of an entire era in 1904. 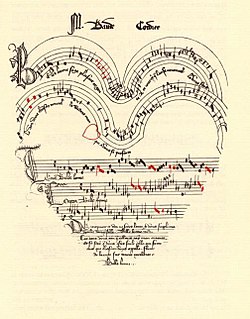 Ars subtilior is a musical style characterized by rhythmic and notational complexity, centered on Paris, Avignon in southern France, and also in northern Spain at the end of the fourteenth century. The style also is found in the French Cypriot repertory. Often the term is used in contrast with ars nova, which applies to the musical style of the preceding period from about 1310 to about 1370; though some scholars prefer to consider ars subtilior a subcategory of the earlier style. Primary sources for ars subtilior are the Chantilly Codex, the Modena Codex, and the Turin Manuscript. 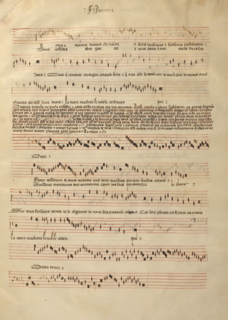 A lai is a lyrical, narrative poem written in octosyllabic couplets that often deals with tales of adventure and romance. Lais were mainly composed in France and Germany, during the 13th and 14th centuries. The English term lay is a 13th-century loan from Old French lai. The origin of the French term itself is unclear; perhaps it is itself a loan from German Leich (reflected in archaic or dialectal English lake, "sport, play" and in modern Swedish. The terms note, nota and notula appear to have been synonyms for lai. 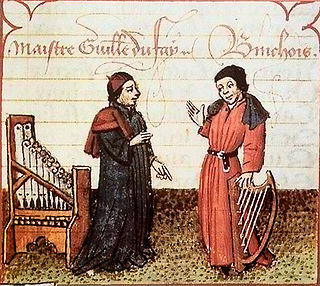 The Burgundian School was a group of composers active in the 15th century in what is now northern and eastern France, Belgium, and the Netherlands, centered on the court of the Dukes of Burgundy. The school inaugurated the music of Burgundy.

Robert Morton was an English composer of the early Renaissance, mostly active at the Burgundian court. He was highly regarded at the time. Only secular vocal music, all Rondeaux for three voices, survive.

Pierre Fontaine was a French composer of the transitional era between the late Middle Ages and early Renaissance, and a member of the Burgundian School of composers. While he was well known at the time, most of his music has probably been lost. All of his surviving music is secular, and all his compositions are chansons.

Grimace was a French composer-poet in the ars nova style of late medieval music. Virtually nothing is known about Grimace's life other than speculative information based on the circumstances and content of his five surviving compositions of formes fixes; three ballades, a virelai and rondeau. He is though to have been a younger contemporary of Guillaume de Machaut and based in southern France. Three of his works were included in the Chantilly Codex, which is an important source of ars subtilior music. However, along with P. des Molins, Jehan Vaillant and F. Andrieu, Grimace was one of the post-Machaut generation whose music shows few distinctly ars subtilior features, leading scholars to recognize Grimace's work as closer to the ars nova style of Machaut. His most often performed work in modern-times is the virelai and proto-battaglia: A l’arme A l’arme.