Jean Frédéric Joliot-Curie (French:  [fʁedeʁik ʒɔljo kyʁi] ; né Joliot; 19 March 1900 – 14 August 1958) was a French physicist, husband of Irène Joliot-Curie with whom he was jointly awarded the Nobel Prize in Chemistry in 1935 for their discovery of artificial radioactivity. [1] [2] He founded with his wife Irène Joliot-Curie the Orsay Faculty of Sciences, part of the Paris-Saclay University. [3]

Born in Paris, France, he was a graduate of ESPCI Paris. [4] In 1925 he became an assistant to Marie Curie, at the Radium Institute. He fell in love with her daughter Irène Curie, and soon after their marriage in 1926 they both changed their surnames to Joliot-Curie. [5] At the insistence of Marie, Joliot-Curie obtained a second baccalauréat, a bachelor's degree, and a doctorate in science, doing his thesis on the electrochemistry of radio-elements.

While a lecturer at the Paris Faculty of Science, he collaborated with his wife on research on the structure of the atom, in particular on the projection, or recoil, of nuclei that had been struck by other particles, which was an essential step in the discovery of the neutron by Chadwick in 1932. In 1935 they were awarded the Nobel Prize in Chemistry for their discovery of "artificial radioactivity", resulting from the creation of short-lived radioisotopes by nuclear transmutation from the bombardment of stable nuclides such as boron, magnesium, and aluminium with alpha particles.

In 1937 he left the Radium Institute to become a professor at the Collège de France. In January 1939 he wrote a letter to his Soviet colleague Abram Ioffe, alerting him to the fact that German physicists had recently discovered nuclear fission of uranium bombarded by neutrons, releasing large amounts of energy. [6] He went on to work on nuclear chain reactions and the requirements for the successful construction of a nuclear reactor that uses controlled nuclear fission to generate energy. Joliot-Curie was mentioned in Albert Einstein's 1939 letter to President Roosevelt as one of the leading scientists on the course to nuclear chain reactions. The Second World War, however, largely stalled Joliot's research, as did his subsequent post-war administrative duties.

At the time of the Nazi invasion in 1940, Joliot-Curie managed to smuggle his working documents and materials to England with Hans von Halban, Moshe Feldenkrais and Lew Kowarski. During the French occupation he took an active part in the French Resistance as a member of the National Front. Collins and LaPierre in their book Is Paris Burning? note that during the Paris uprising in August 1944 he served in the Prefecture of Police, manufacturing Molotov cocktails for his fellow insurgents, the Resistance's principal weapon against German tanks. The Prefecture was the scene of some of the most intense fighting during the uprising. [7]

A team of scientists and intelligence officers from the allied Alsos Mission later found Curie at the Collège de France. He was sent to England to be interviewed and gave important information about the names and activities of German scientists.

He served as director of the French National Centre for Scientific Research, and appointed by Charles De Gaulle in 1945, he became France's first High Commissioner for Atomic Energy. In 1948 he oversaw the construction of the first French atomic reactor. A devoted communist, he was purged in 1950 and relieved of most of his duties, but retained his professorship at the Collège de France. Joliot-Curie was one of the eleven signatories to the Russell–Einstein Manifesto in 1955. On the death of his wife in 1956, he took over her position as Chair of Nuclear Physics at the Sorbonne.

Joliot-Curie was a member of the French Academy of Sciences and of the Academy of Medicine and named a Commander of the Legion of Honour.

He was the recipient of the first Stalin Peace Prize, given in 1951 for his work as president of the World Council of Peace.

The crater Joliot on the Moon is named after him. He was elected a Foreign Member of the Royal Society (ForMemRS) in 1946. [1]

A street in Sofia, Bulgaria, and the nearby Joliot-Curie Metro Station are named after Frédéric Joliot-Curie. Other streets bearing his name can be found in the Rivière-des-Prairies borough of north Montreal, Canada; in Bucharest, Târgu-Mureș, and Cluj-Napoca, Romania; in Warsaw and Wrocław, Poland; and in Poprad, Slovakia.

Frédéric and Irène hyphenated their surnames to Joliot-Curie after they married on 4 October 1926 in Paris, France, although their daughter has said, "Many people used to name my parents Joliot-Curie, but they signed their scientific papers Irène Curie and Frédéric Joliot." [9]

Frédéric Joliot-Curie devoted the last years of his life to the creation of the Orsay Faculty of Sciences and a centre for nuclear physics at Orsay, now part of Paris-Saclay University, where his children were educated.

Nuclear physics is the field of physics that studies atomic nuclei and their constituents and interactions. Other forms of nuclear matter are also studied. Nuclear physics should not be confused with atomic physics, which studies the atom as a whole, including its electrons.

Pierre Curie was a French physicist, a pioneer in crystallography, magnetism, piezoelectricity, and radioactivity. In 1903, he received the Nobel Prize in Physics with his wife, Marie Skłodowska-Curie, and Henri Becquerel, "in recognition of the extraordinary services they have rendered by their joint researches on the radiation phenomena discovered by Professor Henri Becquerel". 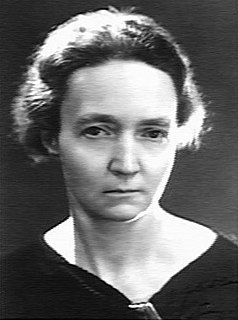 Irène Joliot-Curie was a French chemist, physicist, and a politician of Polish ancestry, the daughter of Marie Curie and Pierre Curie, and the wife of Frédéric Joliot-Curie. Jointly with her husband, Joliot-Curie was awarded the Nobel Prize in Chemistry in 1935 for their discovery of artificial radioactivity. This made the Curies the family with the most Nobel laureates to date. She was also one of the first three women to be a member of a French government, becoming undersecretary for Scientific Research, under the Popular Front in 1936. Both children of the Joliot-Curies, Hélène and Pierre, are also esteemed scientists. 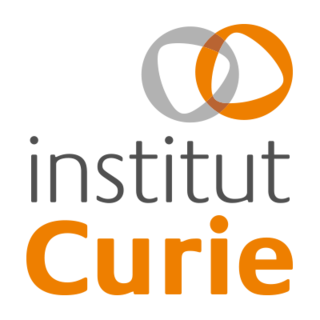 Institut Curie is one of the leading medical, biological and biophysical research centres in the world. It is a private non-profit foundation operating a research center on biophysics, cell biology and oncology and a hospital specialized in treatment of cancer. It is located in Paris, France.

ESPCI Paris is a prestigious institution of higher education founded in 1882 by the city of Paris, France. It educates undergraduate and graduate students in physics, chemistry and biology and conducts high-level research in those fields. It is ranked as the first French École d'Ingénieurs in the 2017 Shanghai Ranking. 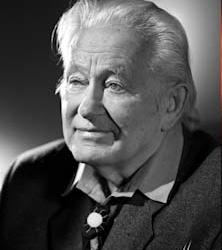 Georges Charpak was a Polish-born French physicist from a Jewish family who was awarded the Nobel Prize in Physics in 1992.

Paul Langevin was a French physicist who developed Langevin dynamics and the Langevin equation. He was one of the founders of the Comité de vigilance des intellectuels antifascistes, an anti-fascist organization created after the 6 February 1934 far right riots. Langevin was also president of the Human Rights League (LDH) from 1944 to 1946 – having recently joined the French Communist Party. Being a public opponent of fascism in the 1930s resulted in his arrest and being held under house arrest by the Vichy government for most of World War II.

Curie may refer to: 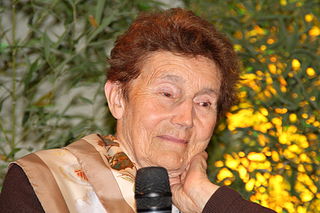 Hélène Langevin-Joliot is a French nuclear physicist. She was educated at the IN2P3 at Orsay, a laboratory which was set up by her parents Irène Joliot-Curie and Frédéric Joliot-Curie. She is a member of the French government's advisory committee. Currently, she is a professor of nuclear physics at the Institute of Nuclear Physics at the University of Paris and a director of research at the CNRS. She is also known for her work in actively encouraging women to pursue careers in scientific fields. She is chairperson of the panel that awards the Marie Curie Excellence award, a prize given to outstanding European researchers. She was president of the French Rationalist Union from 2004 to 2012.

Pierre Adrien Joliot-Curie is a noted French biologist and researcher for the CNRS. A researcher there since 1956, he became a Director of Research in 1974 and a member of their scientific council in 1992. He was a scientific advisor to the French Prime Minister from 1985 to 1986 and is a member of Academia Europæa. He was made a commander of the Ordre National du Mérite in 1982 and of the Légion d'honneur in 1984.

Lew Kowarski was a naturalized French physicist. He was a lesser-known but important contributor to nuclear science.

The Musée Curie is a historical museum focusing on radiological research. It is located in the 5th arrondissement at 1, rue Pierre et Marie Curie, Paris, France, and open Wednesday to Saturday, from 1pm to 5pm; admission is free. The museum was renovated in 2012, thanks to a donation from Ève Curie.

Joliot is a surname. Notable people with the surname include:

Eliane Montel was a French physicist and chemist.

The Curiefamily is a Polish and French family with a number of illustrious scientists. Several members were awarded the Nobel Prize, including physics, chemistry, or the Nobel Peace Prize. Pierre (French) and Marie Curie (Polish) and their daughter Irène Joliot-Curie, are the most prominent members.

Nuclear fission was discovered in December 1938 by physicists Lise Meitner and Otto Robert Frisch, and chemists Otto Hahn and Fritz Strassmann at the Kaiser Wilhelm Institute for Chemistry in Berlin. Fission was a nuclear reaction or radioactive decay process in which the nucleus of an atom splits into two or more smaller, lighter nuclei. The fission process often produces gamma rays, and releases a very large amount of energy even by the energetic standards of radioactive decay. Scientists already knew about alpha decay and beta decay, but fission assumed great importance because the discovery that a nuclear chain reaction was possible led to the development of nuclear power and nuclear weapons.