Standard quantum mechanics can be approached in three different ways: the matrix mechanics, the Schrödinger equation and the Feynman path integral.

Here, the wave functions in the position and momentum spaces;

are related each other by the 3-dimensional Fourier transforms:

The index α in the fractional Schrödinger equation is the Lévy index, 1 < α ≤ 2.

The Schrödinger equation is a linear partial differential equation that describes the wave function or state function of a quantum-mechanical system. It is a key result in quantum mechanics, and its discovery was a significant landmark in the development of the subject. The equation is named after Erwin Schrödinger, who postulated the equation in 1925, and published it in 1926, forming the basis for the work that resulted in his Nobel Prize in Physics in 1933.

Functional integration is a collection of results in mathematics and physics where the domain of an integral is no longer a region of space, but a space of functions. Functional integrals arise in probability, in the study of partial differential equations, and in the path integral approach to the quantum mechanics of particles and fields. 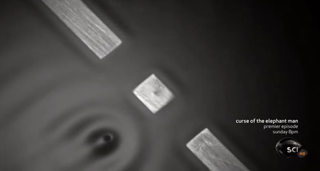 In theoretical physics, the pilot wave theory, also known as Bohmian mechanics, was the first known example of a hidden-variable theory, presented by Louis de Broglie in 1927. Its more modern version, the de Broglie–Bohm theory, interprets quantum mechanics as a deterministic theory, avoiding troublesome notions such as wave–particle duality, instantaneous wave function collapse, and the paradox of Schrödinger's cat. To solve these problems, the theory is inherently nonlocal.

Zitterbewegung ("jittery motion" in German) is a predicted rapid oscillatory motion of elementary particles that obey relativistic wave equations. The existence of such motion was first proposed by Erwin Schrödinger in 1930 as a result of his analysis of the wave packet solutions of the Dirac equation for relativistic electrons in free space, in which an interference between positive and negative energy states produces what appears to be a fluctuation (up to the speed of light) of the position of an electron around the median, with an angular frequency of 2mc2/ℏ, or approximately 1.6×1021 radians per second. For the hydrogen atom, zitterbewegung can be invoked as a heuristic way to derive the Darwin term, a small correction of the energy level of the s-orbitals.

The Schrödinger–Newton equation, sometimes referred to as the Newton–Schrödinger or Schrödinger–Poisson equation, is a nonlinear modification of the Schrödinger equation with a Newtonian gravitational potential, where the gravitational potential emerges from the treatment of the wave function as a mass density, including a term that represents interaction of a particle with its own gravitational field. The inclusion of a self-interaction term represents a fundamental alteration of quantum mechanics. It can be written either as a single integro-differential equation or as a coupled system of a Schrödinger and a Poisson equation. In the latter case it is also referred to in the plural form.

The Feynman checkerboard, or relativistic chessboard model, was Richard Feynman’s sum-over-paths formulation of the kernel for a free spin-½ particle moving in one spatial dimension. It provides a representation of solutions of the Dirac equation in (1+1)-dimensional spacetime as discrete sums.

The Madelung equations, or the equations of quantum hydrodynamics, are Erwin Madelung's equivalent alternative formulation of the Schrödinger equation, written in terms of hydrodynamical variables, similar to the Navier–Stokes equations of fluid dynamics. The derivation of the Madelung equations is similar to the de Broglie–Bohm formulation, which represents the Schrödinger equation as a quantum Hamilton–Jacobi equation.

In quantum mechanics, energy is defined in terms of the energy operator, acting on the wave function of the system as a consequence of time translation symmetry.