Fraher Field (Irish : Páirc Uí Fhearachair [3] ) is a GAA stadium, located in Dungarvan, County Waterford, owned by the Waterford GAA County Board. It has a total capacity of around 15,000.

With the obvious exception of Croke Park, Fraher Field has been the venue for more all-Ireland senior hurling finals than any other venue, having hosted the 1903, 1905, 1907 and 1911 deciders.

Various improvements have been made to the stadium since 1995, including the addition of a new stand on one side of the pitch, and the improvement of standing facilities in general. There are discussions about building a second stand on the other side of the pitch, although any action is likely to be put off for some time due to the likely refurbishment of Walsh Park in Waterford city. The two grounds are rivals for important games, former Waterford hurling manager Davy Fitzgerald saying "There's this endless battle between Walsh Park and Fraher Field, a political battle almost. If one field gets a game, the other has to get the next one. Dungarvan was a nice field, but my personal preference was always Walsh Park, because I felt it had more of the feel of a fortress." [6] 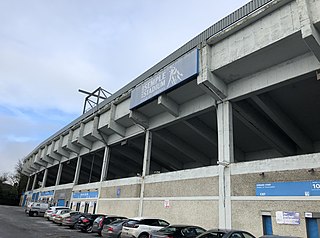 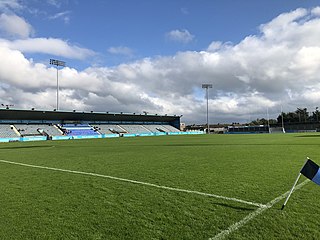 Walsh Park is a GAA stadium in Waterford, Ireland named after Willie Walsh, a well-known referee and long time campaigner for Gaelic games in Waterford. It is one of the two homes of the Waterford Gaelic football and hurling teams, the other being Fraher Field in Dungarvan. The stadium is set to undergo a €7m redevelopment which will result in an increased capacity of 16,500 by 2020, though it is unknown if it will be ready in time for the 2020 Munster Hurling Championship. 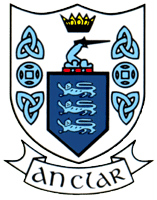 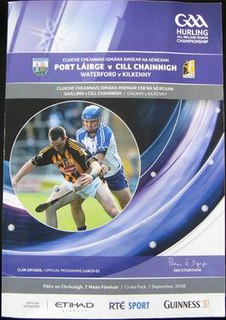 The 2008 All-Ireland Hurling Final was a hurling match played on 7 September 2008 in Croke Park, Dublin, between Kilkenny and Waterford. The match was the 121st All-Ireland Hurling Final and the culmination of the 2008 All-Ireland Senior Hurling Championship. It was the fourth time the teams played each other in the final, having played each other previously in 1957, 1959 and 1963. Kilkenny won their 31st All-Ireland Championship and in doing so overtook Cork on the roll of honour. The Kilkenny win witnessed the county doing three in a row for the first time since 1913. The match represented Waterford's sixth appearance in the All-Ireland Final and their first for 45 years since 1963. Waterford has not won the All-Ireland Championship since 1959.

The 2008 Waterford Senior Football Championship is the championship of the Waterford Senior Football Championship, the premier gaelic football competition in County Waterford, having commenced on 11 May 2008. There were 13 teams in the championship, structured into 2 groups of four teams and 1 group of 5 teams. From these groups, quarter finals, and semi-finals were played with a county final played in Fraher Field. Ballinacourty were the defending champions having beaten Ardmore in the 2007 final.

The 2009 Waterford Senior Hurling Championship commenced on 25 April and concluded on 17 October 2009. De La Salle were the defending champions, having beaten Abbeyside in the 2008 final. Ballygunner defeated Lismore in the 2009 final following a replay. Due to complications with the former structure of the championship in 2008, it had been decided that the 12 teams would be structured into two groups of six. The top four teams from each group advanced to the quarter final stage, from which the semi-finals and the final were played. The final and replay were played in Walsh Park in October 2009. The teams which finished last in each group played in a relegation playoff match. The losing team, Rinn Ó gCuanach, have been demoted to Intermediate for 2010.

The 1892 All-Ireland Senior Hurling Championship Final was the 5th All-Ireland Final and the culmination of the 1892 All-Ireland Senior Hurling Championship, an inter-county hurling tournament for the top teams in Ireland. The match was held at Clonturk Park, Dublin on 26 March 1893 between Cork, represented by club side Redmonds, and Dublin, represented by club side Faughs-Davitts. Cork led by 2-3 to 1-5 when the Dublin side left the field in protest at a disputed goal. Cork were awarded the title.