Villeroy was born in Lyon into noble family which had risen into prominence in the reign of Charles IX. His father Nicolas V de Neufville, Marquis of Villeroy, Marshal of France (1598–1685) was governor of the young King Louis XIV who later made him a duke. [1]

François was brought up in close relations with Louis XIV and became a member of his inner circle. As a young child, he played with the King and his younger brother the Prince Philippe in the Palais Royal (home of Louis XIV and his mother Anne d'Autriche) and the nearby Hôtel de Villeroy (home of the young François de Villeroy and his father the governor Nicolas V de Villeroy - the historic Hôtel de Villeroy is located 500 m walking distance from the Palais-Royal on 34 rue des Bourdonnais / 9 rue des Déchargeurs). Even though Francois de Villeroy was 6 years younger than Louis XIV they were friends, probably because the young Louis XIV enjoyed the role of protector to a younger child.

An intimate of the king, a finished courtier and leader of society and a man of great personal gallantry, Villeroy was marked out for advancement in the army, which he loved, but career soldiers had a juster appreciation of his abilities than Louis. In 1693, without having exercised any really important and responsible command, he was made Marshal of France. In 1695, when François-Henri de Montmorency, duc de Luxembourg died, he obtained the command of the army in Flanders (see War of the Grand Alliance); William III found him a far easier opponent than the "little hunchback" [1] (the duc de Luxembourg). Villeroy was responsible for the senseless bombardment of Brussels in 1695, which occasioned its reconstruction in the 18th century giving it the regularity and unity of architecture seen today (although it was again damaged in both World Wars).[ citation needed ]

In 1701 Villeroy was sent to Italy to supersede Nicolas Catinat and was soon beaten by the inferior army of Prince Eugene of Savoy at Chiari (see War of the Spanish Succession). In February 1702 he was made prisoner at the surprise of the Battle of Cremona. [1]

In the following years he was pitted against the Duke of Marlborough in the Low Countries. Marlborough's own difficulties with the Dutch and other allied commissioners, rather than Villeroy's own skill, put off the inevitable disaster for some years, but in 1706 Marlborough attacked him and thoroughly defeated him at Ramillies. Louis consoled his old friend with the remark, "At our age, one is no longer lucky," but superseded him in the command, and henceforward Villeroy lived the life of a courtier, and although suspected of being involved in plots, maintained his friendship with Louis. [1] During this time, his secretary was Pierre-François Godard de Beauchamps.

Under the Régence Villeroy was governor of the child King Louis XV and held several other high posts between 1717 and 1722, when he fell in disgrace for plotting against Philippe d'Orléans, Duke of Orléans, Regent of France (regent for Louis XV) and was sent to be governor of Lyon, virtually in exile. His family suffered a further disgrace when two younger members, the duc de Retz and the marquis d'Alincourt were exiled for having homosexual relations in the gardens at Versailles. [2] Louis XV recalled Villeroy into high office when he came of age. 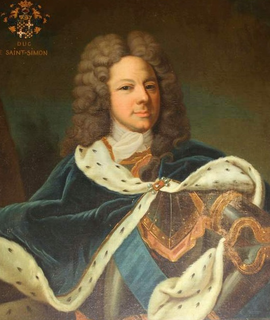 Louis de Rouvroy, Duke of Saint-Simon, GE, was a French soldier, diplomat and memoirist. He was born in Paris at the Hôtel Selvois, 6 rue Taranne . The family's ducal peerage (duché-pairie), granted in 1635 to his father Claude de Rouvroy (1608–1693), served as both perspective and theme in Saint-Simon's life and writings. He was the second and last Duke of Saint-Simon. 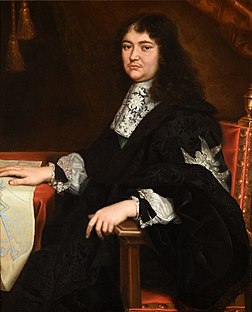 François Michel Le Tellier, Marquis of Louvois was the French Secretary of State for War for a significant part of the reign of Louis XIV. Louvois and his father, Michel le Tellier, would increase the French Army to 400,000 soldiers, an army that would fight four wars between 1667 and 1713. He is commonly referred to as "Louvois". 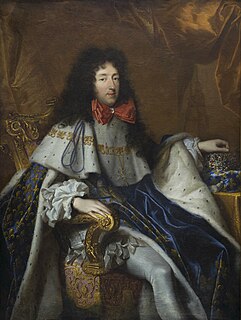 Philippe, Duke of Orléans was the younger son of Louis XIII of France and his wife, Anne of Austria. His older brother was the famous "Sun King", Louis XIV. Styled Duke of Anjou from birth, Philippe became Duke of Orléans upon the death of his uncle Gaston in 1660. In 1661, Philippe also received the dukedoms of Valois and Chartres. Following Philippe's victory in battle in 1671, Louis XIV added the dukedom of Nemours, the marquisates of Coucy and Folembray, and the countships of Dourdan and Romorantin. During the reign of his brother he was known simply as Monsieur, the traditional style at the court of France for the younger brother of the king.

The Régence was the period in French history between 1715 and 1723, when King Louis XV was a minor and the land was governed by Philippe d'Orléans, a nephew of Louis XIV of France, as prince regent. 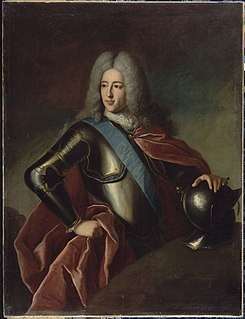 Louis Henri de Bourbon, Duke of Bourbon, or Louis Henri I, Prince of Condé, was head of the Bourbon-Condé cadet branch of the France's reigning House of Bourbon from 1710 to his death, and served as prime minister to his kinsman Louis XV from 1723 to 1726.

Louis, Duke of Burgundy and later Dauphin of France was the eldest son of Louis, Grand Dauphin, and father of Louis XV, and briefly heir-apparent to the throne from his father's death in April 1711 to his own death 10 months later. Until he became the official Dauphin of France upon his father's death in 1711, he was known as Le Petit Dauphin to distinguish him from his father, who was known as le Grand Dauphin. 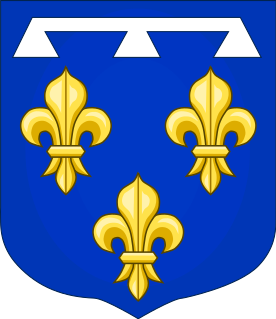 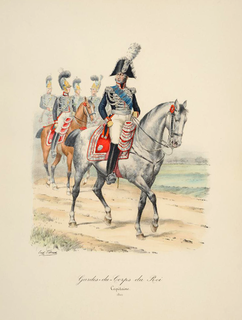 Nicolas IV de Neufville, seigneur de Villeroy was a secretary of state under four kings of France: Charles IX, Henry III, Henry IV, and Louis XIII. The most distinguished of all sixteenth-century French secretaries, Villeroy rose to prominence during the French Wars of Religion, a period of almost insoluble difficulties for the French monarchy and government. Despite faithfully serving Henry III, Villeroy found himself sacked by him without explanation in 1588, along with all the king's ministers. He was reinstated by Henry IV in 1594 and became more important than ever before. He remained in office until his death in 1617 during the reign of Louis XIII. 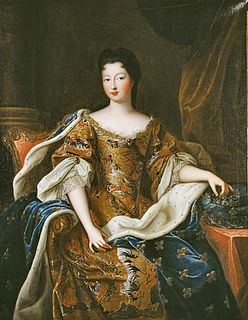 Nicolas Chalon du Blé, marquis d'Uxelles and Cormatin was a French general and Foreign Minister. He was also created a knight and Marshal of France by Louis XIV, and was a diplomat for Louis XIV and Philippe II, Duke of Orléans.

Marie Victoire Sophie de Noailles, Countess of Toulouse, was a French noble and courtier. She was the daughter of Anne Jules de Noailles, the 2nd Duke of Noailles, and Marie-Françoise de Bournonville. Her second spouse was Louis Alexandre de Bourbon, Count of Toulouse, the youngest legitimized son of King Louis XIV of France and his maîtresse-en-titre, Madame de Montespan.

The Neufville de Villeroy family was a French noble family, the most notable member of which was François de Neufville, duc de Villeroi. It was descended from a finance minister to Louis XII. 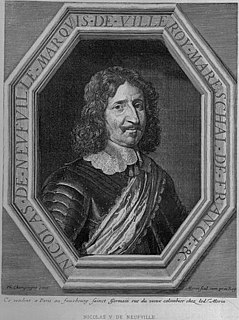 Nicolas V de Neufville de Villeroy was a French nobleman and marshal of France. He was marquis then 1st duke of Villeroy and peer of France, marquis d'Alincourt and lord of Magny, and acted as governor of the young Louis XIV. His son François succeeded him as duke. He was the lover of Catherine-Charlotte de Gramont. 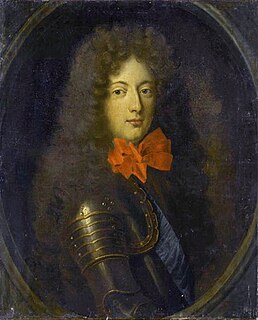 Philippe of Lorraine, known as the Chevalier de Lorraine, was a French nobleman and member of the House of Guise, cadet of the Ducal House of Lorraine. He was the renowned lover of Philippe I, Duke of Orléans, brother of Louis XIV. 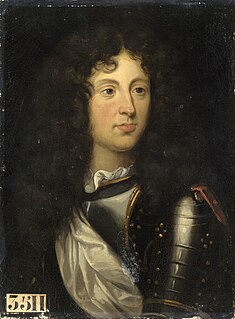 Charles de Lorraine was a member of the House of Guise, a cadet branch of the House of Lorraine. Succeeding his father as the Count of Armagnac, he also succeeded as Count of Brionne as well as the Grand Squire of France.

The hôtel de Villeroy, also the hôtel de Villeroy Bourbon or hôtel de la Poste, is a hôtel particulier, a type of large townhouse of France, at 34 rue des Bourdonnais, 9 rue des Déchargeurs, 17 rue des Halles in the 1st arrondissement of Paris. It is a designated monument historique.