Michèle Cortes de Leone y Fabianera, better known as her stage name Françoise Fabian (French:  [fabjɑ̃] ; born 10 May 1933), is a French film actress. She has appeared in more than 80 films since 1956. In 1971, Fabian signed the Manifesto of the 343, publicly declaring having had an abortion. [1]

André, Baron Delvaux was a Belgian film director and widely regarded as the founder of the Belgian national cinema. Born in Heverlee, he died in Valencia, Spain. after giving a speech at the World Arts Meeting. He received the Magritte Honorary Award at the Magritte Awards 2011.

Françoise Madeleine Hardy is a French singer-songwriter. She made her musical debut in the early 1960s on Disques Vogue and found immediate success with her song "Tous les garçons et les filles". As a leading figure of the yé-yé movement, Hardy "found herself at the very forefront of the French music scene", and became "France's most exportable female singing star", recording in various languages, appearing in movies, touring throughout Europe, and gaining plaudits from musicians such as Bob Dylan, Miles Davis and Mick Jagger. With the aid of photographer Jean-Marie Périer, Hardy also began modeling, and soon became a popular fashion icon as well. 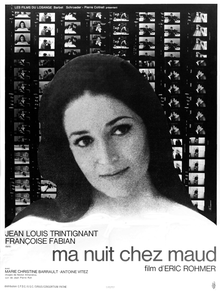 My Night at Maud's, also known as My Night with Maud (UK), is a 1969 French New Wave drama film by Éric Rohmer. It is the third film in his series of Six Moral Tales. 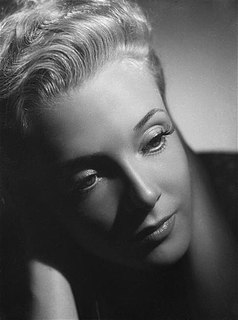 Ghislain Cloquet was a Belgian-born French cinematographer. Cloquet was born in Antwerp, Belgium in 1924. He went to Paris to study and became a French citizen in 1940.

The Letter is a 1999 French-Portuguese drama film directed by Manoel de Oliveira. It tells the story of a married woman who has feelings for another man, and who confesses her feelings to her friend, a cloistered nun. The film is loosely based on the 17th century French novel The Princess of Cleves by Madame de Lafayette.

Partir, revenir is a 1985 French film directed by Claude Lelouch.

Season's Beatings is a French comedy-drama film directed by Danièle Thompson, released in 1999. 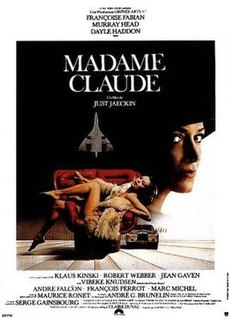 The French Woman is a 1977 French drama film directed by Just Jaeckin and starring Françoise Fabian. The film is inspired by the life of French brothel madam Madame Claude.

The Manifesto of the 343, was a French petition signed by 343 women "who had the courage to say, 'I've had an abortion'". It was an act of civil disobedience, since abortion was illegal in France, and by admitting publicly to having aborted, they exposed themselves to criminal prosecution. The manifesto was published in the social democratic French weekly magazine Le Nouvel Observateur on April 5, 1971. The manifesto called for the legalization of abortion and free access to contraception. It paved the way to the adoption, in December 1974-January 1975, of the "Veil law", named for Health Minister Simone Veil, that repealed the penalty for voluntarily terminating a pregnancy during the first ten weeks.

Raphael, or The Debauched One is a 1971 French historical drama film directed by Michel Deville. It was entered into the 1971 Cannes Film Festival. 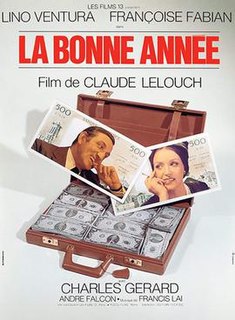 La bonne année is a 1973 film directed by Claude Lelouch.

Family Tree is a 2010 French film directed by Olivier Ducastel and Jacques Martineau. It drew its inspiration in large measure from the life of Pierre Seel, an Alsatian homosexual deported to the camp of Schirmeck, who wrote of his experiences in a book, Moi, Pierre Seel, déporté homosexuel. The film won the Prix Jean Vigo in 2009. 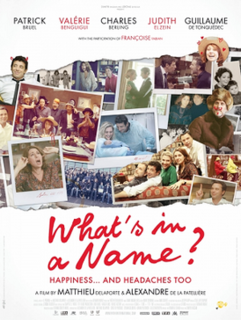 What's in a Name? is a French-Belgian comedy film, written and directed by Alexandre de La Patellière and Matthieu Delaporte and released in 2012. It is adapted from the play Le Prénom by the same authors. The film was a box office success in France, selling 3,340,231 tickets.

Michel Strogoff is a 1956 French-Italian adventure film based on the 1876 novel by Jules Verne, directed by Carmine Gallone and starring Curd Jürgens.

Brillantissime is a French comedy directed by Michèle Laroque and based on the play My Brilliant Divorce by Geraldine Aron. It was released in France on 17 January 2018. This is the first movie directed by the actress.