France Inter (French pronunciation: ​ [fʁɑ̃s‿ɛ̃tɛʁ] ) is a major French public radio channel and part of Radio France. It is a "generalist" station, aiming to provide a wide national audience with a full service of news and spoken-word programming, both serious and entertaining, liberally punctuated with an eclectic mix of music. It is broadcast on FM from a nationwide network of transmitters, as well as via the internet.

The channel announced during 2016 that it would discontinue transmissions from the Allouis longwave transmitter on 162 kHz with effect from 1 January 2017, thereby saving approximately €6 million per year. Transmission from Allouis of the atomic-clock-generated time signal would, however, continue after this date as the signal is critical for over 200,000 devices deployed within French enterprises and state entities, such as French Railways (SNCF), the electricity distributor ENEDIS, airports, hospitals, municipalities, etc. [1]

France Inter was founded as part of the reorganization of state broadcasting which followed the end of World War II as "Paris-Inter" and charged with being French public radio's generalist (i.e. "full-service") service. The channel was renamed "France I" in 1958, although three years later one of France's most popular radio and television listings magazines was still showing the station's programmes under the heading "Paris-Inter" with "France I" as a subtitle. [2] In October 1963 the France I and France II networks were merged to form "RTF Inter", renamed "France Inter" with effect from 8 December.

The major challenge faced by France Inter at the time of its reorganization in the 1960s was the private "peripheral stations" (in particular, RTL and Europe 1, broadcasting from powerful transmitters outside France) success in capturing the majority of the French radio audience since the war. They had done so by adopting a modern broadcasting style and earning a reputation for greater freedom from government influence.

As well as rapidly modernizing its style to match its competitors, France Inter stressed its freedom from commercial pressures – although it does carry a limited amount of paid-for advertising – and especially presented itself as intelligent radio accessible to a general audience under the slogan Écoutez la différence ("Listen to the difference").

France Inter programmes, a number of which have been important milestones in the history of French radio, include:

BBC Radio 4 is a radio station which is owned and operated by the British Broadcasting Corporation (BBC). A part of BBC Radio, it broadcasts a wide variety of spoken-word programmes including news, drama, comedy, science and history from the BBC's headquarters at Broadcasting House, London. It replaced the BBC Home Service in 1967. The station controller is Mohit Bakaya. 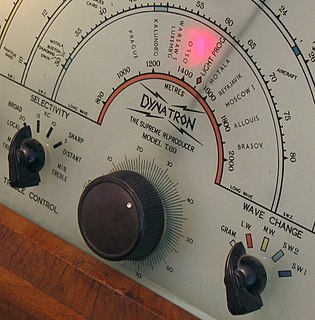 RTL, formerly Radio Luxembourg, is a French commercial radio network owned by the RTL Group. Founded in 1933 as Radio Luxembourg, the station's name was changed to RTL in 1966. It broadcast from outside France until 1981, because only public stations had been allowed until then.

The Allouis longwave transmitter has been France's central longwave broadcast transmitter since 1939. It is located near the village of Allouis. 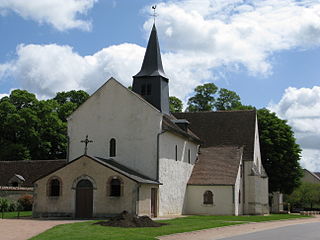 Allouis is a commune in the Cher department of the Centre-Val de Loire region of France.

FM broadcasting is a method of radio broadcasting using frequency modulation (FM). Invented in 1933 by American engineer Edwin Armstrong, wide-band FM is used worldwide to provide high fidelity sound over broadcast radio. FM broadcasting is capable of higher fidelity—that is, more accurate reproduction of the original program sound—than other broadcasting technologies, such as AM broadcasting or DAB radio. Therefore, FM is used for most broadcasts of music or general audio. FM radio stations use the very high frequency range of radio frequencies.

Europe 1, formerly known as Europe n° 1, is a privately owned radio station created in 1955. Owned and operated by Lagardère Active, a subsidiary of the Lagardère Group, it is one of the leading radio broadcasting stations in France and its programmes can be received throughout the country.

Radio Televizioni Shqiptar is the public broadcaster of Albania, founded in 1938 in Tirana.

Radio France Internationale, usually referred to as RFI, is a French public radio service that broadcasts in Paris and all over the world. With 35.6 million listeners in 2008, it is one of the most listened to international radio stations in the world, along with BBC World Service, Voice of America and China Radio International.

TéléDiffusion de France broadcast the TDF time signal, controlled by LNE–SYRTE, from the Allouis longwave transmitter at 162 kHz, with a power of 800 kW.

FIP is a French radio network, founded in 1971. It is part of the Radio France group.

Radio Caroline is a British radio station founded in 1964 by Ronan O'Rahilly initially to circumvent the record companies' control of popular music broadcasting in the United Kingdom and the BBC's radio broadcasting monopoly. Unlicensed by any government for most of its early life, it was a pirate radio station that never became illegal as such due to operating outside any national jurisdiction, although after the Marine Offences Act (1967) it became illegal for a British subject to associate with it.

Sud Radio is a French privately owned radio station. Sud Radio was founded and created in 1958.

Chérie FM is a French radio station created in 1987 and belongs to the NRJ Group.

The following radio stations broadcast on AM frequency 162 kHz:

Radioplus is a private radio station owned and broadcast by Defimedia group, a leading media and communication company in Mauritius. It started operation in 2002 with a private commercial free to air FM radio broadcasting licence issued by the Independent Broadcasting Authority - Mauritius.

Téva is a French general-interest television channel, privately owned, with a female and family focus, belonging to the M6 Group. Téva has been broadcast in 16:9 since 10 November 2009 and in HD quality since 8 November 2011.