Francesco Lanzillotta (born 1977) [1] is an Italian conductor and composer. As a conductor, he is focused on Italian opera, including contemporary works. He has conducted internationally, such as Verdi's La traviata in Varna, Bulgaria, Nabucco at the Deutsche Oper Berlin, Puccini's La bohème at the Bavarian State Opera, and Dallapiccola's Ulisse at Oper Frankfurt. He has conducted music by contemporary Italian composers.

Lanzillotta was born in Rome. He studied there at the Accademia Nazionale di Santa Cecilia, [2] piano with Velia De Vit, and composition with Luciano Pelosi. He took master classes with Harold Farberman and George Pehlivanian. [3] Lanzillotta is a regular conductor at Italian opera houses such as La Fenice in Venice, Teatro Regio in Parma, Teatro Verdi in Triest, Teatro di San Carlo in Naples and Teatro Lirico di Cagliari. He has conducted orchestras including the RAI National Symphony Orchestra, the Orchestra i Pomeriggi Musicali in Milan, the Orchestra della Svizzera Italiana and the Orchestra della Toscana in Florence. He is interested in music of the 20th and 21st centuries, [2] [4] [5] such as Giorgio Battistelli, Ada Gentile, Ennio Morricone, Michele Dall'Ongaro  [ it ], Marcello Panni  [ it ] and Francesco Pennisi  [ it ]. [2] [3]

In 2010, Lanzillotta became principal guest conductor at the opera house of Varna, Bulgaria, where he conducted productions of Mozart's Le nozze di Figaro , Verdi's La traviata , Bizet's Carmen , Mascagni's Cavalleria rusticana , Leoncavallo's Pagliacci and Puccini's La bohème and Tosca . [3] From 2014, he was conductor of the Filarmonica Arturo Toscanini in Parma for four years. [5] He first conducted at the Bavarian State Opera in Munich Puccini's La bohème. [2] His first work at the Deutsche Oper Berlin was Verdi's Nabucco in 2018. [3] In 2020, he conducted a DVD recording of Alfano's opera Risurrezione , directed by Rosetta Cucchi, with chorus and orchestra of the Maggio Musicale Fiorentino, and Ana Victória Pitts and Anne-Sophie Duprels in leading roles. [6]

In 2022, he conducted a new production of Dallapiccola's Ulisse at Oper Frankfurt, directed by Tatjana Gürbaca, [4] [7] with Iain MacNeal in the title role, Juanita Lascarro as Penelope and Danylo Matviienko as Antinoos. [4] A reviewer from Neue Musikzeitung noted that the music was rendered with precision, colourful and expressive. [7] A reviewer from Süddeutsche Zeitung wrote that Lanzillotta was aware of details, did "not shy away from agglomerations of sound" ("scheut Klangballungen nicht"), but emphasized the flow of Ulisse's search for identity. [8]

Lamberto Gardelli was a Swedish conductor of Italian birth, particularly associated with the Italian opera repertory, especially the works of Giuseppe Verdi. 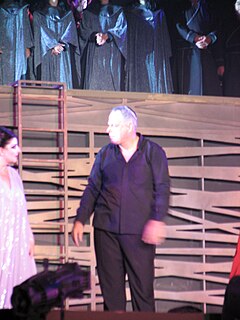 Daniel Oren is an Israeli conductor.

Rico Saccani is a conductor who served as Music Director/Artistic Adviser of the Budapest Philharmonic Orchestra between 1996 and 2005 and was principal guest conductor of the Hungarian State Opera from 1985 to 2005. 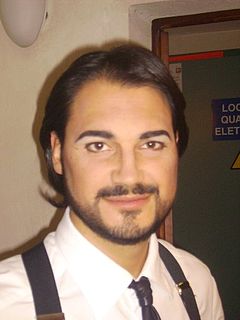 Francesco Demuro, is an Italian operatic tenor. He was born in Porto Torres, Sardinia. By the age of ten, Demuro made his first stage appearance, and by the age of twelve, he had joined the Minicantadores, a group of young singers of traditional Sardinian songs in the genre known as cantu a chiterra of which he became a leading representative. 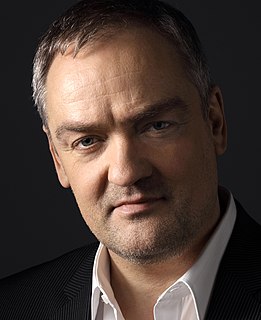 Ștefan Pop is a Romanian operatic tenor. He is considered among today's leading lyric tenors and he is best known for bel canto repertoire. He has won several prizes including, in 2010, Plácido Domingo's Operalia competition and the Seoul International Music Competition.

Heather Engebretson is a Chinese-American operatic soprano who made a career mostly in Europe. Based at German opera ensembles for several years, she has worked freelance from 2017, and widened her repertoire from coloratura roles to leading characters such as Puccini's Madama Butterfly. She has been praised for her convincing acting as well as the expressiveness of her lyric voice, with performances including the Royal Opera House in London, the Bolshoi Theatre and Oper Frankfurt.

Vera Nemirova is a Bulgarian-German opera director who has worked at major opera houses in Europe, staging for example Wagner's Der Ring des Nibelungen at the Oper Frankfurt. She directed for the Munich Biennale and the Salzburg Festival. 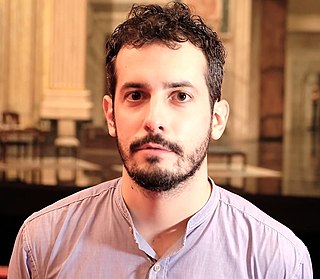 Lorenzo Passerini is an Italian conductor who began as a trombonist. He has worked at major opera houses in Europe and Australia, such as Verdi's Un ballo in maschera at the Teatro Real in Madrid, Gounod's Faust at the Sydney Opera House, and a new production of Giordano's Fedora at the Oper Frankfurt in 2022.

Juanita Lascarro is a Colombian soprano in opera and concert, and a voice teacher. She began her career in Europe in the title role of Daphne by Richard Strauss at several houses. Based at Oper Frankfurt, she has performed leading roles at major opera houses. She performed the title role of Martinů's Julietta, which was recorded. In 2022, she appeared as both Calypso and Penelope in a new production of Dallapiccola's Ulisse.

Iain MacNeal is a Canadian baritone in opera and concert who has performed leading roles at major opera houses in North America and Europe. He is based at the Oper Frankfurt, where he appeared in the title role in a new production of Dallapiccola's Ulisse in 2022.