Born at Senise, in the province of Potenza, he entered the order of Theatines in 1665 (at the age of 13). On 27 September 1684, after being nominated by King Charles II of Spain, he was elected archbishop of Taranto. He was recruited by Pope Clement XI to be nuncio to Poland, where he attempted to work on the schism between Catholics and Ruthenians (Ukrainians and Polish). [1] On 19 February 1703 he was transferred to the metropolitan see of Naples and occupied it until his death.

In the papal conclave, 1721 Spain vetoed his election to the pontificate. He became Dean of the Sacred College of Cardinals in June 1726 but declined the promotion to the suburbicarian see of Ostia e Velletri (proper of the dean) and retained the see of Porto e S. Rufina. He died at Naples.

The dean of the College of Cardinals presides over the College of Cardinals in the Roman Catholic Church, serving as primus inter pares. The position was established in the early 12th century. He always holds the rank of a cardinal bishop, and is assisted by a vice-dean. Both are elected by and from the cardinal bishops who are not Eastern Catholic patriarchs, with their election subject to papal confirmation. Except for presiding over the college, the dean and vice-dean have no power over the other cardinals. In the order of precedence in the Catholic Church, the dean and vice-dean, as the two most senior cardinals, are placed second and third, respectively, after the pope. 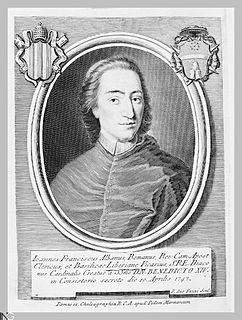 Gian Francesco Albani was a Roman Catholic Cardinal. He was a member of the Albani family.

The bishop of Ostia is the head of the suburbicarian diocese of Ostia, one of the seven suburbicarian sees of Rome. Since 1150, the bishop has been the dean of the College of Cardinals, with the actual governance of the diocese entrusted to the vicar general of Rome.

Gennaro Granito Pignatelli di Belmonte was an Italian Cardinal of the Roman Catholic Church and a prominent member of the Roman Curia.

Carlo Rezzonico was a cardinal of the Roman Catholic Church. He is sometimes referred to as The Younger to distinguish him from his uncle Pope Clement XIII who also bore the name Carlo Rezzonico.

Giuseppe Spinelli was an Italian cardinal. He was prefect of the Congregation for the Evangelization of Peoples.

Alfonso Gesualdo di Conza was an Italian Cardinal starting in 1561. He was from Naples. His attendance at the papal conclave of 1565-1566 at the age of only 25 makes him one of the youngest Cardinals ever to participate in a papal election. 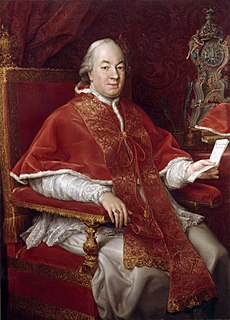 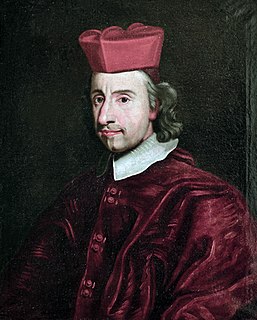 Francesco del Giudice was a Roman Catholic cardinal from 1690 to 1725 who also held a variety of other ecclesiastical and governmental offices. 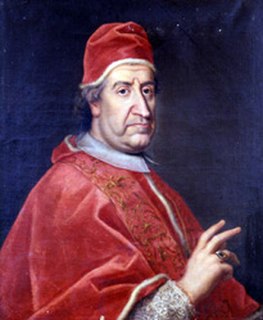 Antonio Sanseverino was an Italian Roman Catholic cardinal and bishop.

Giovanni Antonio Guadagni – in religion Giovanni Antonio di San Bernardo – was an Italian cardinal and a professed member from the Discalced Carmelites. His rise in the ranks became rapid after his maternal uncle became Pope Clement XII. He was soon after made a cardinal and served in various positions within the Roman Curia.