Saint Francis Borgia, 4th Duke of Gandía SJ (Valencian: Francesc de Borja, Spanish : Francisco de Borja) (1510–1572) was a great-grandson of Pope Alexander VI, a Grandee of Spain, a Spanish Jesuit, and third Superior General of the Society of Jesus. He was canonized on 20 June 1670 by Pope Clement X.

He was born in Duchy of Gandía, Valencia, on 28 October 1510. His father was Juan Borgia, 3rd Duke of Gandía, the son of Giovanni Borgia, the son of Pope Alexander VI (Rodrigo Borgia). His mother was Juana, daughter of Alonso de Aragón, Archbishop of Zaragoza, who, in turn, was the illegitimate son of King Ferdinand II of Aragon. [1] His brother, Tomás de Borja y Castro, also became a clergyman, becoming the Bishop of Málaga, and later the Archbishop of Zaragoza.

Although as a child he was very pious and wished to become a monk, his family sent him instead to the court of Charles V, Holy Roman Emperor (who was also King Charles I of Spain), where he was welcomed as a kinsman. [1] He distinguished himself there, accompanying the Emperor on several campaigns.

In 1539, he convoyed the corpse of Isabella of Portugal, Philip II of Spain's mother, to her burial place in Granada. In that same year (1539), he became Viceroy of Catalonia, replacing Fadrique de Portugal y Noroña, though he was only 29.

He delighted above all in producing ecclesiastical compositions, and these display a remarkable contrapuntal style and bear witness to the skill of the composer, justifying indeed the assertion that, in the sixteenth century and prior to Palestrina, Borgia was one of the chief restorers of sacred music. [1]

In 1543 upon the death of his father, the 3rd Duke, Francis became the 4th Duke of Gandía. [2] His diplomatic abilities came into question when his attempt to arrange a marriage between Prince Philip and the Princess of Portugal failed, thus ending an attempt to bring these two countries together and resulting in his retirement. [3] By then 33 years old, he had retired to his native place and devoted himself to religious activities.

In 1546 his wife Eleanor died, and Francis then decided to enter the newly formed Society of Jesus, after making adequate provisions for his children. He put his affairs in order circa 1551, renounced his titles in favour of his eldest son Carlos de Borja-Aragon y de Castro-Melo, and became a Jesuit priest. He helped in the establishment of what is now the Gregorian University in Rome. [4] Upon Francis’ return from a journey to Peru, Pope Julius III made known his intention to make him a cardinal. [3] To prevent this, Borgia decided, in agreement with St. Ignatius, to leave the city secretly and go to the Basque Country, where it was thought he would be safe from the papal desires. [5] He felt drawn to spend time in seclusion and prayer, but his administrative talents also made him a natural for other tasks. In time his friends persuaded him to accept the leadership role that nature and circumstances had destined him for: in 1554, he became the Jesuit commissary-general in Spain, [6] where he founded a dozen colleges. [4] After only two years, St. Francis was also given responsibility for missions in the East and West Indies. [3] In 1565, he was elected the third "Father General" or Superior General of the Society of Jesus, after the death in January 1565 of Diego Laynez, (Almazán, Spain, 1512 – January 1565).

His successes during the period 1565–1572 have caused historians to describe Francis as the greatest General after Saint Ignatius. He founded the Collegium Romanum, which was to become the Gregorian University, advised kings and popes, and closely supervised all the affairs of the rapidly expanding order. Yet, despite the great power of his office, Francis led a humble life and was widely regarded in his own lifetime as a saint.

Francis Borgia died on 30 September 1572, in Rome. He was beatified in Madrid on 23 November 1624, by Pope Urban VIII. He was canonized nearly 35 years later on 20 June 1670, [6] by Pope Clement X. His liturgical feast was inserted into the General Roman Calendar in 1688 for celebration on 10 October, [7] the date then free from other celebrations that was closest to that of his death.

Parishes are dedicated to St. Francis Borgia in Chicago, Illinois, [8] Sturgis, Kentucky, [9] Washington, Missouri, [10] Blair, Nebraska, [11] and Cedarburg, Wisconsin. [12] Also in the village of Isio in the town of Cauayan, Negros Occidental, Philippines. The Jesuit-founded city of São Borja, in southern Brazil, is named after him.

As the great-great grandfather of Doña Luisa de Guzmán, queen consort of King John IV of Portugal, he is an ancestor of many of the royal houses of Europe.[ citation needed ]

Pope Alexander VI, born Rodrigo de Borja, was Pope from 11 August 1492 until his death. He is one of the most controversial of the Renaissance popes, partly because he acknowledged fathering several children by his mistresses. Therefore his Italianized Valencian surname, Borgia, became a byword for libertinism and nepotism, which are traditionally considered as characterizing his pontificate.

The House of Borgia was an Italo-Spanish noble family, which rose to prominence during the Italian Renaissance. They were from Aragon, the surname being a toponymic from the town of Borja, then in the Crown of Aragon, in Spain. 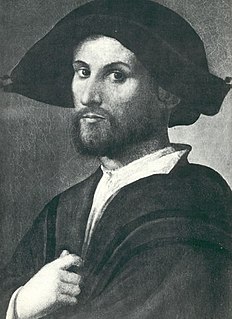 Rodrigo Borja Cevallos is an Ecuadorian politician who was President of Ecuador from August 10, 1988 to August 10, 1992. 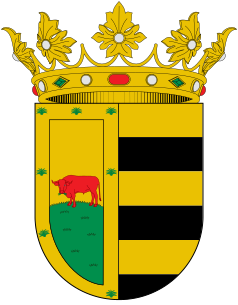 Ana Francisca Hermenegilda de Borja y Doria, condesa de Lemos (1640–1706) was the wife of Peruvian Viceroy Pedro Antonio Fernández de Castro, conde de Lemos. During his five-month absence from the capital, she was governor of the colony. She thus became the first female governor of the Viceroyalty of Peru.

The Ajacán Mission was a Spanish attempt in 1570 to establish a Jesuit mission in the vicinity of the Virginia Peninsula to bring Christianity to the Virginia Indians. The effort to found St. Mary's Mission predated the founding of the English settlement at Jamestown, Virginia, by about 36 years. In February 1571, the entire party was massacred by Indians except Alonso de Olmos. The following year, a Spanish party from Florida went to the area, rescued Alonso, and killed an estimated 20 Indians. 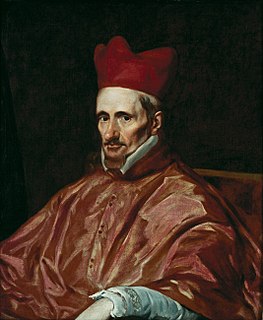 Pier Luigi de Borgia, 1st duke of Gandía was a Valencian noble. Pier Luigi was the son of Cardinal Rodrigo Borgia, and an unknown free-woman. He was half-brother of Cesare Borgia, Gioffre Borgia, Giovanni Borgia and Lucrezia Borgia. 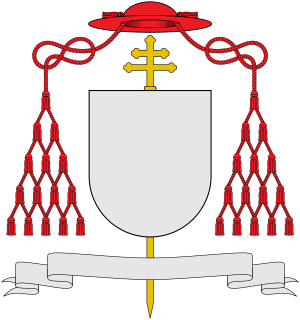 Enrique de Borja y Aragón, was a Spanish noble of the House of Borgia. He was the Bishop of Squillace in Italy, and went on to become a Cardinal. 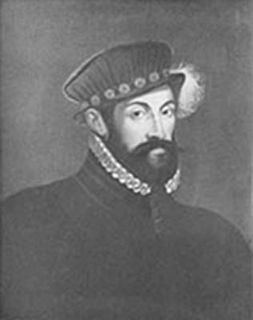 Juan de Borja y Castro was a Spanish noble of the House of Borja and the House of Castro. Juan was a soldier, diplomat and a worker for the Spanish state. He is best known for being the first Count of Mayalde and count consort of Ficalho.

Juan Buenaventura de Borja y Armendia was a Spanish noble of the House of Borja who served in multiple positions of power throughout the New Kingdom of Granada. He is perhaps best known for serving as the President of the Real Audiencia de Santa Fe de Bogotá.

Maria Enriquez de Luna was the wife of Juan (Giovanni) Borgia, second Duke of Gandia. She was a first cousin of King Ferdinand II of Aragon and Queen Isabella of Castile, and therefore of the House of Trastamara. She married Juan somewhere between 1493-1494, and together, they had three children: twins Juan de Borja y Enriquez, who became the 3rd Duke of Gandía, and Francisca de Jesus Borja, who became a nun at a convent in Valladolid. The younger Juan was the father of Saint Francis Borgia. Their third child, Isabel de Borja y Enriquez, was born after her father was killed. She grew up to be abbess of Santa Clara in Gandia. In personality, Maria was very intelligent, devout, financially shrewd, and devoted to her husband and children, in contrast to her husband, who was regarded by many as a womanizer, a gambler, a drunkard, and an incompetent general. 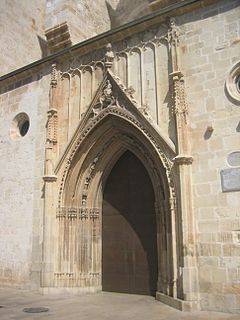 Leonor Castro de Mello y Meneses was a Portuguese noble and court official, the IVth Duchess of Gandia,, and the lady-in-waiting and close friend of the Empress regent Isabella of Portugal.

Francisco Borgia may refer to following members of the Borgia family:

Marquiss of Lombay is a noble title created by King Charles V of Spain in favor of Saint Francis Borgia Grandee of Spain, Duke of Gandia. on 7 July 1530. 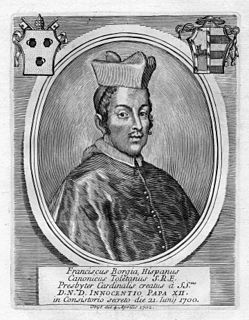 Francisco Antonio de Borja-Centelles y Ponce de Léon was a Spanish cardinal and member of the Borgia family. He served as Bishop of Calahorra y La Calzada-Logroño (1701-1702) and Archbishop of Burgos (1702).