Francis Seymour-Conway,1st Marquess of Hertford,KG,PC,PC (Ire) (5 July 1718 –14 June 1794) of Ragley Hall,Arrow,in Warwickshire,was a British courtier and politician who,briefly,was Viceroy of Ireland where he had substantial estates.

Hertford was born in Chelsea,London,the son of Francis Seymour-Conway,1st Baron Conway,and Charlotte Shorter,daughter of John Shorter of Bybrook. He was a descendant of Edward Seymour,1st Duke of Somerset and first cousin of Edward Seymour,8th Duke of Somerset. He succeeded to the barony on the death of his father in 1732. The first few years after his father's death were spent in Italy and Paris. On his return to England,he took his seat,as 2nd Baron Conway,among the Peers in November 1739. Henry Seymour Conway,politician and soldier,was his younger brother.

In August 1750 he was created Viscount Beauchamp and Earl of Hertford ,both of which titles had earlier been created for and forfeited by his ancestor Edward Seymour,1st Duke of Somerset,Lord Protector of England,following his attainder and execution in 1552. The Seymour family had inherited a moiety of the feudal barony of Hatch Beauchamp,in Somerset,by marriage to the heiress Cicely Beauchamp (d.1393). In 1755,according to Horace Walpole,4th Earl of Orford,"The Earl of Hertford,a man of unblemished morals,but rather too gentle and cautious to combat so presumptuous a court,was named Ambassador to Paris". However,due to the demands of the French,the journey to Paris was suspended. From 1751 to 1766 he was Lord of the Bedchamber to George II and George III. In 1756 he was made a Knight of the Garter and,in 1757,Lord-Lieutenant and Guardian of the Rolls of the County of Warwick and City of Coventry.

From 1759 to 1765,Hertford's household included Edward Despard,serving his wife as a page. [2] Despard was to hang in London in 1803 as the ringleader of an alleged republican plot against the King. [3]

In 1763 Hertford became Privy Councillor and,from October 1763 to June 1765,was a successful ambassador in Paris. He appointed David Hume as his Secretary,who wrote of him,"I do not believe there is in the World a man of more probity &Humanity,endowd with a very good Understanding,and adornd with very elegant Manners &Behaviour". [4] [5] He witnessed the sad last months of Madame de Pompadour,whom he admired,and wrote a kindly epitaph for her. [6]

In August 1765 he was appointed Lord Lieutenant of Ireland. In Dublin,leading representatives of the Protestant Ascendancy warmly anticipated his arrival. The Speaker of the Irish House of Commons,John Ponsonby,was satisfied that "the public as well as private character of Lord Hertford,together with the great property which he has in Ireland" were "the best securities which we can have for his good behaviour. There could not have been found a person to govern us who in all respects would be so likely to use us well . . .". But with his eldest son,Francis,Viscount Beauchamp,as his chief secretary,Hertford was in Ireland for just one parliamentary session (October 1765–June 1766). He hastened to return to his court circle in London where he was appointed Lord Chamberlain 1766–82 (and again April–December 1783). [7]

In 1782,when she was only fifty-six,his wife died after having nursed their grandson at Forde's Farm,Thames Ditton,where she caught a violent cold. According to Walpole,"Lord Hertford's loss is beyond measure. She was not only the most affectionate wife,but the most useful one,and almost the only person I ever saw that never neglected or put off or forgot anything that was to be done. She was always proper,either in the highest life or in the most domestic." (Walpole visited Forde's Farm on several occasions from his residence at Strawberry Hill,Twickenham.) Within two years of the tragedy,Lord Hertford had sold Forde's Farm to Mrs Charlotte Boyle Walsingham,and a further two years later,she had re-developed the estate,building a new mansion which she called Boyle Farm,a name still in use today.

In July 1793 he was created Marquess of Hertford,with the subsidiary title of Earl of Yarmouth. He enjoyed this elevation for almost a year until his death at the age of seventy-six,on 14 June 1794,at the house of his daughter,the Countess of Lincoln. He died as the result of an infection following a minor injury he received while riding. He was buried at Arrow,in Warwickshire.

Lord Hertford married Lady Isabella Fitzroy,daughter of Charles FitzRoy,2nd Duke of Grafton,on 29 May 1741. Her grandfather was Henry FitzRoy,1st Duke of Grafton (1663-1690),an illegitimate son of King Charles II. By his wife he had thirteen children:

He is not known to have suffered himself from any mental abnormality,but a noted strain of eccentricity,even madness,appeared among his descendants:the debauched behaviour of his grandson,the 3rd Marquess,and the suicide of another grandson,Viscount Castlereagh,were both attributed to a strain of madness supposed to be hereditary in the Seymour Conway family. [8]

Duke of Somerset,from the county of Somerset,is a title that has been created five times in the peerage of England. It is particularly associated with two families:the Beauforts,who held the title from the creation of 1448,and the Seymours,from the creation of 1547,in whose name the title is still held. The present dukedom is unique,in that the first holder of the title created it for himself in his capacity of Lord Protector of the Kingdom of England,using a power granted in the will of his nephew King Edward VI. 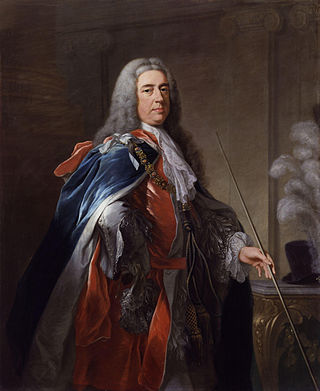 Charles FitzRoy,2nd Duke of Grafton,was an Irish and English politician.

Edward Seymour,8th Duke of Somerset was an English peer and landowner.

William Seymour,2nd Duke of Somerset,was an English nobleman and Royalist commander in the English Civil War.

Captain Hugh de Grey Seymour,6th Marquess of Hertford,styled Earl of Yarmouth from 1870 to 1884,was a British soldier,courtier and Conservative politician. He notably served as Comptroller of the Household between 1879 and 1880.

Francis Ingram-Seymour-Conway,2nd Marquess of Hertford,KG,PC,PC (Ire),styled The Honourable Francis Seymour-Conway until 1750,Viscount Beauchamp between 1750 and 1793,and Earl of Yarmouth between 1793 and 1794,was a British peer and politician. He held seats in the Irish House of Commons from 1761 to 1776 and in the British House of Commons from 1766 to 1794. He served as Chief Secretary for Ireland under his father. He subsequently held positions in the Royal Household,including serving as Lord Chamberlain between 1812 and 1822.

Seymour,Semel or St. Maur,is the name of an English family in which several titles of nobility have from time to time been created,and of which the Duke of Somerset is the head.

The titles Baron Beauchamp and Viscount Beauchamp have been created several times throughout English and British history. There is an extant Viscountcy of Beauchamp,held by the Seymour family,Marquesses of Hertford. 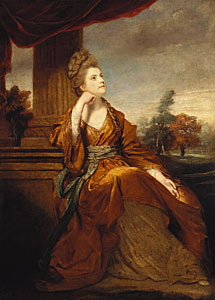 Edward Seymour,Lord Beauchamp of Hache was an English nobleman who had a theoretically strong claim to the throne of England through his mother,Lady Katherine Grey,but his legitimacy was questioned. He was an ancestor of the Dukes of Somerset.

James Waldegrave,2nd Earl Waldegrave,was a British politician who is sometimes regarded as one of the shortest-serving British prime ministers in history. His brief tenure as First Lord of the Treasury is lent a more lasting significance by his memoirs,which are regarded as significant in the development of Whig history.

Gentleman of the Bedchamber was a title in the royal household of the Kingdom of England from the 11th century,later used also in the Kingdom of Great Britain. A Lord of the Bedchamber was a courtier in the Royal Household;the term being first used in 1718. The duties of the Lords and Gentleman of the Bedchamber originally consisted of assisting the monarch with dressing,waiting on him when he ate,guarding access to his bedchamber and closet and providing companionship. Such functions became less important over time,but provided proximity to the monarch;the holders were thus trusted confidants and often extremely powerful. The offices were in the gift of The Crown and were originally sworn by Royal Warrant directed to the Lord Chamberlain.

Edward Conway,1st Earl of Conway PC,FRS,of Ragley Hall,Alcester,in Warwickshire,was an English peer and politician who served as Secretary of State for the Northern Department between 1681 and 1683.

Lieutenant Colonel Hugh Henry John Seymour was a British Army officer and a politician. He sat in the House of Commons of the United Kingdom for County Antrim from 1818 until his death.