Francis Walker (31 July 1809 – 5 October 1874) was an English entomologist. He was born in Southgate, London, on 31 July 1809 and died at Wanstead, England on 5 October 1874. He was one of the most prolific authors in entomology, and stirred controversy during his later life as his publications resulted in a huge number of junior synonyms.

Walker was contracted by the British Museum between June 1848 and late 1873 to catalogue their insects (except Coleoptera). Walker added an immense amount of material to the collections of the British Museum and wrote over 300 scientific papers and notes. He is best known for his catalogues of Orthoptera, Neuroptera, Hemiptera, Diptera, Lepidoptera and Hymenoptera. Collaborating with Alexander Henry Haliday, a lifelong friend, he was one of the first students of the Chalcidoidea. He was also a close friend of John Curtis. Walker was a fellow of the Entomological Society. Walker's specimens are in the Natural History Museum, London; Hope Department of Entomology, University of Oxford; the National Museum of Ireland, Dublin; Zoologische Staatssammlung München and the School of Medicine, Cairo, Egypt.

Francis Walker was the son of John Walker of Arnos Grove, who was a fellow of the Royal Society, the Linnean Society and the Royal Horticultural Society. Born into a wealthy and educated family, Francis spent the years 1816 (when he was seven years old) to 1820 (when he was eleven) in Switzerland at Geneva, Lucerne and Vevey where the family party was joined by Madame de Staël, the poet Lord Byron and some Swiss naturalists gathered around Nicolas Théodore de Saussure. With his brother Henry (1825–1892), Francis collected butterflies on an ascent of Mount Pilatus in 1818 and so was an entomologist at age nine. In 1840 Walker married Mary Elizabeth Ford. He lived at Arnos Grove and relied on family money for his main income.

In 1834, Walker took up the editorship of the Entomological Magazine unpaid for one year. In 1837, he began working on a contract basis for the British Museum where he remained until 1863. [1]

Walker was a traveller with a liking for mountains. His known trips are:

Walker is notable in the present time for the large number of synonymous taxa he described. A careless taxonomist by today's standards, he often gave more than one name to the same species. In this respect, however, he was no worse than many entomologists of his time; what makes for the more common occurrence of Walker's taxa in synonymy is the sheer volume of his work.

An unsigned obituary began "More than twenty years too late for his scientific reputation, and after having done an amount of injury almost inconceivable in its immensity, Francis Walker has passed from among us". [2] Edward Newman, in contrast described him as the "most voluminous and most industrious writer on Entomology this country has ever produced" and said of him "I never met anyone who possessed more correct, more diversified, or more general information, or who imparted that information to others with greater readiness and kindness." [3]

[Walker's] 'Catalogues of Insects in the British Museum Collections' will always stand as a tribute to his industry. Walker (1836) also described the Diptera from Captain P. P. King's collection made on the first surveying voyage of Adventure and Beagle . Fortunately, many of his descriptions of Darwin's insects will endure because they were of little known groups from little worked regions and most of his types are still in the British Museum (Natural History). For a recent balanced account of this remarkable man see Graham (1979). [5] 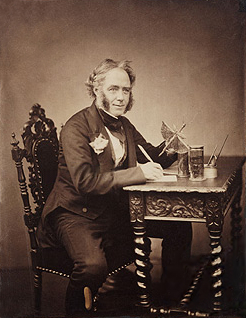 James Francis Stephens was an English entomologist and naturalist. He is known for his 12 volume Illustrations of British Entomology (1846) and the Manual of British Beetles (1839). 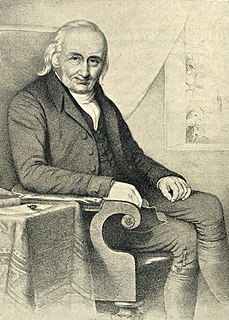 John Curtis was an English entomologist and illustrator. 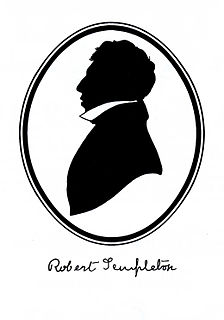 Edward Doubleday was an English entomologist primarily interested in Lepidoptera. He is best known for The Genera of Diurnal Lepidoptera: Comprising Their Generic Characters, a Notice of Their Habits and Transformations, and a Catalogue of the Species of Each Genus, co-written with John O. Westwood, and illustrated by William Chapman Hewitson; and List of the Specimens of Lepidopterous Insects in the Collection of the British Museum.

Adam White was a Scottish zoologist.

Xylomyidae is a family of flies known commonly as the wood soldier flies. They are xylophagous and are associated with dead or dying wood.

Monographia Chalciditum by Francis Walker, published in two volumes in 1839, was a founding work of entomology, introducing new genera of chalcidoid Hymenoptera later to be ranked as families. The work is a compilation of descriptions published in the Entomological Magazine. In its preparation Walker used descriptions provided by the Irish entomologist Alexander Henry Haliday. 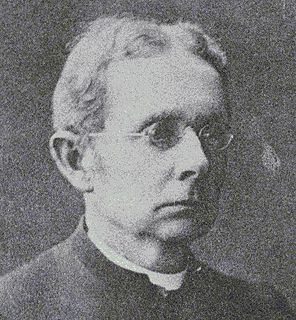 Thomas Blackburn was an English-born Australian entomologist who specialized in the study of beetles. 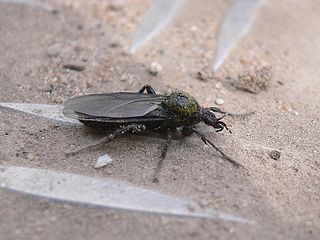 Condylostylus sipho is a species in the family Dolichopodidae, in the order Diptera ("flies").

Galopagomyia is a genus of true flies in the family Sarcophagidae.