Francisco Adolfo de Varnhagen, Viscount of Porto Seguro (February 17, 1816 – June 26, 1878), was a Brazilian diplomat and historian. He is the patron of the 39th chair of the Brazilian Academy of Letters. [1] He is considered "the father of modern Brazilian historical scholarship." [2]

Varnhagen was born in 1816, in the city of Iperó, Brazil. He was the son of Maria Flávia de Sá Magalhães and Friedrich Ludwig Wilhelm Varnhagen, a German-born military engineer, who was in service to the Portuguese crown and in Brazil to inspect iron foundries. [3] He received his primary education in Rio de Janeiro. At an early age, he went with his family to Lisbon, where he studied at the Real Colégio Militar da Luz. In the civil war in Portugal, he served those supporting Dom Pedro I. He returned to his studies, where he learned paleography and studied political economy and languages (French, German, English). [4]

His first History work would be Notícia do Brasil, written between 1835 and 1838. His research would lead him to find Pedro Álvares Cabral's long-lost grave at the Igreja da Graça, in Santarém. He was admitted at the Sciences Academy of Lisbon and graduated in military engineering at the Academia Real de Fortificação, Artilharia e Desenho.

He returned to Brazil in 1840, entering at the Brazilian Historic and Geographic Institute in 1841. In 1844 he obtained Brazilian citizenship, and could apply to a diplomatic career. He served in Portugal and Spain, where he was able to utilize the archives in Seville and Simancas for his history of Brazil. [5] He later served in Paraguay, where he found the current regime of Carlos Antonio López odious, but he gathered further materials for his history of Brazil, particularly on the Tupí Indians. [6] He also served in Venezuela, the Republic of New Granada (modern Colombia), Ecuador, Chile (where he met his wife, an aristocratic Chilean lady Doña Carmen Ovalle y Vicuña, marrying her in 1864), Peru and the Netherlands. He published the first volume of his masterpiece, História Geral do Brasil, in 1854. Its second volume was published in 1857.

In 1872, Emperor Pedro II would give him the title of Baron of Porto Seguro, being elevated to Viscount two years later. His final diplomatic service was in Vienna, Austria, where he was serving as a minister when he died in 1878.

His remains were transported to Santiago, Chile, but would be years later removed to a monument erected in honor of him at the city of Sorocaba. Part of his library was acquired by bibliophile José Mindlin.

Varnhagen's work was recognized at the time as a major contribution to historical writing on Brazil, with Alexander von Humboldt, the great Prussia scientist and intellectual, saying that "I will be glad to have [Varnhagen's history of Brazil] in its entirety and to see it reposing in our library." [7] Varnhagen participated in political debate about the importance of Brazil's Indians in the formation of Brazil. He rejected the Indianist school that saw Brazil's Indians as "noble savages" and "a basis for brasilidade (Brazilianness)., In volume two of his História Geral do Brazil, Varnhagen added an appendix that dealt with this issue. "The Indians were not masters of Brazil nor is the name Brazilian applicable to them as savages. Nor could they be civilized without the presence of force, which was not abused as much as stated. and finally they can in no way be taken as our guides in the present or past in sentiments of patriotism or in the representation of nationality." [8] In general, Varnhagen was pro-monarchy, since it gave Brazil a strong central government and took the part of Portuguese colonists in debates about the colonial era. He had a mixed assessment of the Jesuits in Brazil, whom he did credit for contributions. For the thirty-year Dutch occupation of Brazil's northeast, he viewed the episode as lamentable on one hand, but beneficial to Brazil on the other, viewing the Dutch as "a nation more active and industrious" than Brazil at the time. [9] 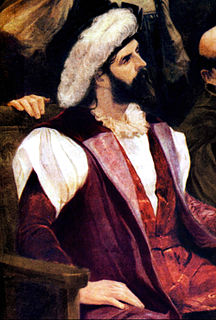 Pedro Álvares Cabral was a Portuguese nobleman, military commander, navigator and explorer regarded as the European discoverer of Brazil. In 1500 Cabral conducted the first substantial exploration of the northeast coast of South America and claimed it for Portugal. While details of Cabral's early life remain unclear, it is known that he came from a minor noble family and received a good education. He was appointed to head an expedition to India in 1500, following Vasco da Gama's newly-opened route around Africa. The undertaking had the aim of returning with valuable spices and of establishing trade relations in India—bypassing the monopoly on the spice trade then in the hands of Arab, Turkish and Italian merchants. Although the previous expedition of Vasco da Gama to India, on its sea route, had recorded signs of land west of the southern Atlantic Ocean, Cabral led the first known expedition to have touched four continents: Europe, Africa, America, and Asia.

Mem de Sá was a Governor-General of the Portuguese colony of Brazil from 1557-1572. He was born in Coimbra, Kingdom of Portugal, around 1500, the year of discovery of Brazil by a naval fleet commanded by Pedro Álvares Cabral. 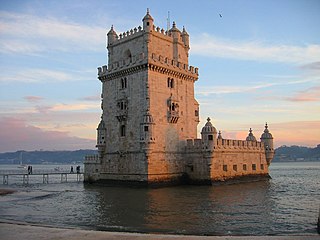 The Manueline, occasionally known as Portuguese late Gothic, is the sumptuous, composite Portuguese architectural style originating in the 16th century, during the Portuguese Renaissance and Age of Discoveries. Manueline architecture incorporates maritime elements and representations of the discoveries brought from the voyages of Vasco da Gama and Pedro Álvares Cabral. This innovative style synthesizes aspects of Late Gothic Flamboyant architecture with original motifs and influences of the Plateresque, Mudéjar, Italian, and Flemish architecture. It marks the transition from Late Gothic to Renaissance. The construction of churches and monasteries in Manueline was largely financed by proceeds of the lucrative spice trade with Africa and India. 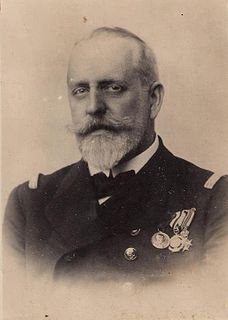 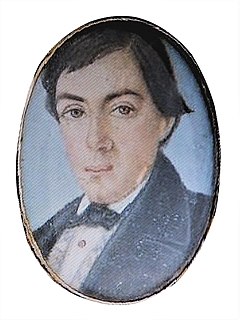 Francisco de Borja Garção Stockler, 1st Baron of Vila da Praia, was a lieutenant general and the 8th Captain General of the Azores, politician, and mathematician. 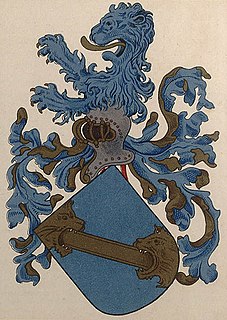 Sancho de Tovar, 6th Lord of Cevico, Caracena and Boca de Huérgano was a Portuguese nobleman of Castilian birth, best known as a navigator and explorer during the Portuguese age of discoveries. He was the vice-admiral (soto-capitão) of the fleet that discovered Brazil in 1500, and was later appointed Governor of the East African port-city of Sofala by king Manuel I. In this post, he conducted several exploratory missions in the interior regions of present-day Mozambique. 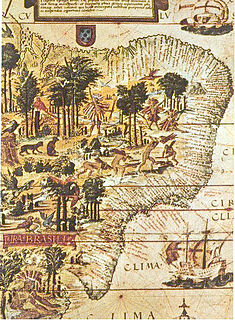 The name Brazil is a shortened form of Terra do Brasil, Land of Brazil, a reference to the brazilwood tree. This name was given in the early 16th century to the territories leased to the merchant consortium led by Fernão de Loronha for the commercial exploitation of brazilwood, for the production of wood dyes for the European textile industry. Before colonisation, the native name of the land was the one given by the local indigenous peoples, Pindorama.

The Siege of Caxias was a siege during the Brazilian War of Independence in which the Brazilian Army under the command of José Pereira Filgueiras attempted to capture the city of Caxias in Maranhão, which was defended by the Portuguese Army of João José da Cunha Fidié. The siege lasted from 23 May 1823 until 31 July 1823, when the Portuguese surrendered to the Brazilian forces after the combats that occurred between 17 July and 19 July that severely reduced its numbers. The event marked the beginning of the Portuguese forces' collapse in Maranhão.

The Padre Eterno was a galleon of the Portuguese Navy, built in Rio de Janeiro, Colony of Brazil in the 17th century, at the order of Salvador Corrêa de Sá e Benevides for transportation of sugar and goods for the Companhia Geral do Comércio. She was later sold to the Portuguese Crown.

SAVAG – Sociedade Anônima Viação Aérea Gaúcha was a Brazilian airline founded in 1946 that operated mainly in the state of Rio Grande do Sul. It was absorbed by Cruzeiro do Sul in 1966.

Mestre João Faras, better known simply as Mestre João, was an astrologer, astronomer, physician and surgeon of King Manuel I of Portugal who accompanied Pedro Álvares Cabral in the discovery of Brazil in 1500, and wrote a famous letter identifying the Southern Cross constellation. 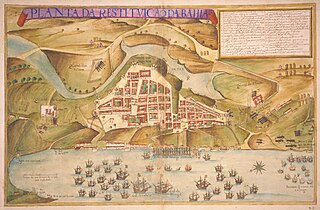 João de Lisboa was a Portuguese explorer. He is known to have sailed together with Tristão da Cunha, and to have explored Río de La Plata and possibly the San Matias Gulf, around 1511-12. The Brazilian historian Francisco Adolfo de Varnhagen erroneously stated that he was in Ferdinand Magellan circumnavigation voyage. 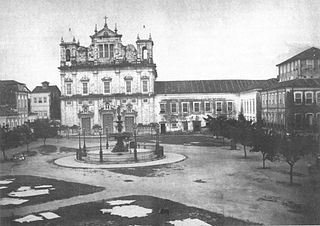 The Terreiro de Jesus is a plaza of great historic and cultural importance located in the Historic Center of Salvador de Bahia in Brazil. The square is located in the oldest part of the city and abuts the Praça da Sé. Officially the plaza is known as the Praça 15 de Novembro. 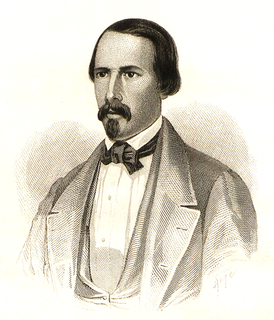 Inocêncio Francisco da Silva, often referred simply as Innocencio was the most distinguished Portuguese bibliographer, who compiled seven centuries' worth of information about Portuguese-language authors up to the mid-19th century. He authored the monumental Diccionario Bibliographico Portuguez, which was continued by others following his death. 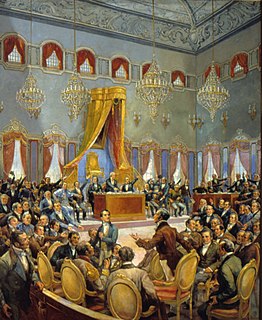 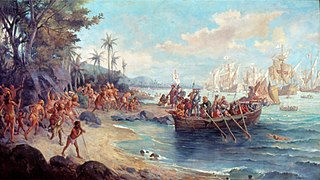