Last updated January 16, 2021
Spanish footballer
In this Spanish name, the first or paternal surname is Buyoand the second or maternal family name is Sánchez.

Francisco "Paco" Buyo Sánchez (born 13 January 1958) is a Spanish former footballer who played as a goalkeeper.

Best known for his Sevilla and Real Madrid spells, Buyo appeared in 542 La Liga matches, third all-time highest at the time of his retirement, winning 12 major titles with the latter club.

For about one decade, Buyo was a backup on the Spain national team to two European Championships.

Buyo was born in Betanzos, A Coruña. At the age of fourteen he began playing football for local Ural CF, for which he appeared as both a goalkeeper and right winger during his one-year spell, achieving the feat of being both unbeaten between the goalposts and also the team's top goalscorer. [1]

Buyo's first professional club was RCD Mallorca, in the second division. After one season he joined Deportivo de La Coruña, where he would stay until 1980, with a loan to SD Huesca – while he performed military service in Jaca – in between. [1] He made his debuts in La Liga in the 1980–81 season with Sevilla FC, being the starting goalkeeper from the beginning; he played there six years, appearing in 242 official matches and winning his debut Spain national football team callup.

Buyo's performance at Sevilla made Real Madrid require his services, signing him in 1986 as a replacement for an ageing Miguel Ángel. In his first season he appeared in all 44 league games (the campaign featured a second stage), the first being a 3–1 win over Real Murcia, being instrumental to the Merengues' national title; he would remain in the capital club until his retirement in 1997, aged 39.

The local success Buyo met with Madrid (six leagues and two Copa del Rey) could not be translated into international accolades, as they kept being eliminated in European Cup competition. However, in his first season, he did have a memorable performance against Michel Platini's Juventus F.C. in the round-of-16 of the 1986–87 edition: after the Spaniards won 1–0 in the first leg and the Italians did the same in the second meeting, the winner was decided in a penalty shootout, won by the former after he saved two of the opposition's shots; [2] he earned his first Ricardo Zamora Trophy during his second league campaign after conceding only 23 goals in 35 league contests, and his second came in 1991–92 during which he played as many matches, with 27 goals against.

Madrid would win two more league titles with Buyo in goal, the first of which came in the 1994–95 season, during which he also had a streak of 709 minutes without conceding a goal in league play, between 3 December 1994 and 12 February 1995, [3] the fifth-longest streak ever in the Spanish league. In total, he kept 17 clean sheets throughout the course of the season. [4] In his final year the club won another league, but he did not feature at all, as he was only third-choice behind Bodo Illgner and Santiago Cañizares; [5] he retired with 542 first division games played, the third-most behind another goalkeeper, Andoni Zubizarreta, and Eusebio Sacristán.

During Buyo's time at Deportivo, he was selected to the Spain under-21 team. He also represented the nation at the 1980 Summer Olympics, being eliminated in the first round.

At full international level, Buyo was capped seven times and was part of the squad that finished runner-up at the UEFA Euro 1984. His debut came on 21 December 1983 in the historical 12–1 trouncing of Malta for the qualifying stage, in a match played in Seville. [6]

After retiring, Buyo had a short coaching spell with youth clubs Real Madrid cadetes and Real Madrid C, only returning to the benches in 2008 with Real Jaén's reserves.

Additionally, he also worked with as a sports analyst in Al-Jazeera, contributing to its La Liga and UEFA Euro 2008 coverage.

The Campeonato Nacional de Liga de Primera División, commonly known as La Liga, stylized as LaLiga, is the men's top professional football division of the Spanish football league system. Administered by the Liga Nacional de Fútbol Profesional, is contested by 20 teams, with the three lowest-placed teams at the end of each season relegated to the Segunda División and replaced by the top two teams and a play-off winner in that division.

Real Club Deportivo de La Coruña, commonly known as Deportivo La Coruña, Deportivo or simply Dépor, is a professional football club based in the city of A Coruña, Galicia, Spain. They currently play in Segunda División B – Group 1, the third tier of the football league pyramid in Spain.

José Francisco Molina Jiménez is a Spanish retired footballer who played as a goalkeeper, and is the current sporting director of the Royal Spanish Football Federation. 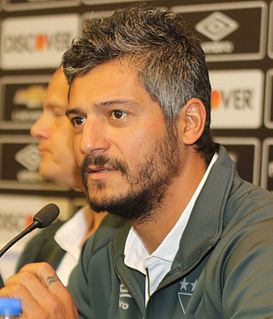 Gustavo Adolfo Munúa Vera is a Uruguayan former footballer who played as a goalkeeper, and is a current manager.

Diego López Rodríguez is a Spanish professional footballer who plays for RCD Espanyol as a goalkeeper.

José Manuel Ochotorena Santacruz is a Spanish retired footballer who played as a goalkeeper.

The 2006–07 La Liga season, the 76th since its establishment, started on 27 August 2006 and finished on 17 June 2007. Real Madrid won La Liga on the better head to head against Barcelona in one of its most thrilling seasons to date. Celta de Vigo, Real Sociedad and Gimnàstic de Tarragona were relegated.

Julen Lopetegui Agote is a Spanish football manager and former player, and the current manager of Sevilla FC.

Fernando Navarro Corbacho is a Spanish former professional footballer. Mainly a left back, he could also play as a central defender.

Juan Miguel García Inglés, known as Juanmi, is a Spanish retired footballer who played as a goalkeeper.

Francisco 'Patxi' Ferreira Colmenero is a Spanish retired footballer who played as a central defender.

Agustín de Carlos Elduayen is a Spanish retired footballer who played as a goalkeeper.

The 2012–13 Atlético Madrid season was the 82nd season in the club's history. Atlético competed in La Liga, the Copa del Rey, and in the Europa League as defending champions. They were eliminated in the Round of 32 by Rubin Kazan. They won the Copa del Rey after beating rivals Real Madrid 2–1 in extra time.