Francisco Labastida Ochoa (Spanish pronunciation:  [fɾanˈsisko laβasˈtiða] ; born 14 August 1942) is a Mexican economist and politician affiliated with the Institutional Revolutionary Party (PRI), who became the first presidential candidate of his party to lose a presidential election, which he did in the 2000 presidential election to Vicente Fox.

Labastida was born to Gloria Ochoa de Labastida and Dr. Eduardo Labastida Kofahl. His wife, Dr. Teresa Uriarte, was director of UNAM's Institute of Aesthetics Research. His great-grandfather fought on the side of Former Mexican President Benito Juárez in the War of Reform, and his grandfather was Governor of Sinaloa as well as federal deputy.

Just like his grandfather, Labastida served as governor of Sinaloa (1987–1992), defeating Manuel Clouthier of the National Action Party. During and after his tenure as governor, Labastida was accused of protecting Sinaloan drug traffickers and overlooking their criminal activities. [1]

After losing the 2000 presidential election, he served as president of the Centro de Estudios para el Desarrollo de México. In the 2006 general election, he was elected to the Senate for the PRI, representing Sinaloa. [2]

The Politics of Mexico take place in a framework of a federal presidential representative democratic republic whose government is based on a congressional system, whereby the President of Mexico is both head of state and head of government, and of a multi-party system. The federal government represents the United Mexican States and is divided into three branches: executive, legislative and judicial, Anahis term as established by the Political Constitution of the United Mexican States, published in 1917. The constituent states of the federation must also have a republican form of government based on a congressional system as established by their respective constitutions.

The National Action Party, founded in 1939, is a conservative political party in Mexico, one of the three main political parties in Mexico. Since the 1980s, it has been an important political party winning local, state, and national elections. In 2000, PAN candidate Vicente Fox was elected president for a six-year term; in 2006, PAN candidate Felipe Calderón succeeded Fox in the presidency. During the period 2000-2012, PAN was the strongest party in both houses of the Congress of the Union but lacked a majority in either house. In the 2006 legislative elections the party won 207 out of 500 seats in the Chamber of Deputies and 52 out of 128 Senators. In the 2012 legislative elections, the PAN won 38 seats in the Senate, and 114 seats in the Chamber of Deputies. The members of this party are colloquially called Panistas.

Ernesto Zedillo Ponce de León, is a Mexican economist and politician. He was President of Mexico from 1 December 1994 to 30 November 2000, as the last of the uninterrupted 71-year line of Mexican presidents from the Institutional Revolutionary Party (PRI).

Miguel de la Madrid Hurtado was a Mexican politician affiliated with the Institutional Revolutionary Party (PRI) who served as the 52nd President of Mexico from 1982 to 1988. During his presidency, de la Madrid introduced sweeping neoliberal economic policies in Mexico, beginning an era of market-oriented presidents in that country. His administration was criticized for its slow response to the 1985 Mexico City earthquake, and the handling of the controversial 1988 Presidential elections in which the PRI candidate Carlos Salinas de Gortari was declared winner, amid accusations of electoral fraud.

Roberto Madrazo Pintado is a Mexican politician affiliated with the Institutional Revolutionary Party (PRI). He was the candidate of the alliance between his party and the Ecologist Green Party of Mexico (PVEM) in the 2006 Mexican presidential election.

Pemexgate was a political scandal of the Mexican political party PRI that occurred during the presidency of Ernesto Zedillo (1994-2000) and was discovered and investigated during the presidency of Vicente Fox (2000-2006). It was centered on the transfer of 500 million pesos to the PRI candidate for the 2000 Presidential Elections, Francisco Labastida Ochoa, from Pemex, Mexico's national oil company.

Jesús Enrique Jackson Ramírez is a Mexican politician affiliated with the Institutional Revolutionary Party (PRI). He is currently a member of the Chamber of Deputies from the first electoral region to the LXIII Legislature of the Mexican Congress. 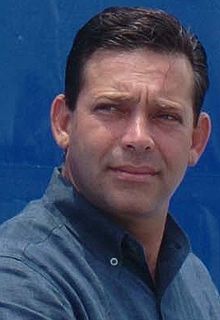 Eugenio Javier Hernández Flores, is a Mexican politician affiliated with the Institutional Revolutionary Party (PRI). He was the mayor of Ciudad Victoria from 2001 to 2004 and Governor of the state of Tamaulipas from 2004 to 2010, and was also federal deputy in 2000 and coordinator of the Financial Committee of Tomas Yarrington during his campaign. On May 27, 2015, he was indicted on charges of money laundering alongside his brother-in-law Oscar Gomez Guerra by the United States Department of Justice (USDOJ).

Alberto Emiliano Cinta Martínez is a Mexican economist, entrepreneur and politician who is a founder and became the first General Secretary of the New Alliance Party (PANAL). He ran as the PANAL's candidate for Mayor of Mexico City Head of Government of the Federal District in the 2006 Federal District election. He has been a Congressman, public servant, university professor and entrepreneur. He studied Economics at the ITAM in Mexico City, and holds two master's degrees from both the Ecole Nationale d'Administratuon and Harvard. He has been a Deputy at the Chamber of Deputies for the Green Party and President of the Special Commission of Competitiveness (2009-2012) and also a Deputy for Mexico City (2012-2015). Since 2001 he is the founder and Chairman of a leading Mexican hospitality group that operates more than fifty hi end restaurants, nightclubs, business clubs, and concert halls. In 2014 his group started operations in the US with the opening of its first restaurant, in Miami.

Manlio Fabio Beltrones Rivera is a Mexican economist and elected official, member of the Partido Revolucionario Institucional (PRI) party, and a federal deputy since September 1, 2012. He was the president of the Senate during its 2006-2007 session and was reelected to that position for the 2010-2011 term. He served as governor of Sonora from October 22, 1991 to September 12, 1997. He served two terms as federal deputy. He was the President of the Chamber of Deputies in 2004-2005. From 2015 to June 2016, he was the president of the Institutional Revolutionary Party.

Humberto Roque Villanueva is a Mexican politician affiliated with the Partido Revolucionario Institucional (PRI). He is a native of Torreón, Coahuila.

Mario López Valdez, popularly known as Malova, is a Mexican businessman and politician, a member of the National Action Party. He was a senator of the state of Sinaloa from 2006 to 2010 and municipal president of Ahome Municipality from 2002 to 2004. He was the Governor of Sinaloa, from 2011 to 2016.

Maurilio Ochoa Millán is a Mexican politician from the Institutional Revolutionary Party, who most recently served as Secretary of Urban Development and Ecology for the state of Chihuahua. From 2009 to 2012 he served as Deputy of the LXI Legislature of the Mexican Congress representing Chihuahua.

This is a list of events that happened in 2016 in Mexico. 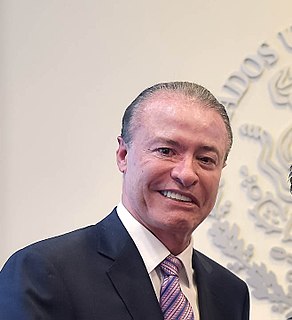 Quirino Ordaz Coppel is a Mexican lawyer and politician affiliated with the Institutional Revolutionary Party. He is currently serving as the Governor of the state of Sinaloa since January 2017. He previously served as a federal deputy for the VIII Federal Electoral District of Sinaloa from August 29, 2015, to March 1, 2016.