Francisco Pascasio Moreno (May 31, 1852 – November 22, 1919) was a prominent explorer and academic in Argentina, where he is usually referred to as Perito Moreno (perito means "specialist, expert"). Perito Moreno has been credited as one of the most influential figures in the Argentine incorporation of large parts of Patagonia and its subsequent development.

Moreno was born to Francisco and Juana Thwaites Madero in Buenos Aires. Raised in a traditional patrician family, he studied in local parochial schools. He shared his spare time with his father searching for artifacts and fossils and, at age 14, created a homemade museum of his extensive collections.

Following graduation in 1872, he participated in the founding of the Argentine Scientific Society. He embarked on the first of the series of scientific expeditions that made him well known: a survey of Río Negro Territory, largely uncharted country. In January 1876, he reached Lake Nahuel-Huapi in the southern Andes, and on February 15, 1877, he discovered and named Lake Argentino. He also explored numerous rivers in Patagonia. On March 2, he discovered and named Mount Fitz Roy, after the commander of the expedition of HMS Beagle in the 1830s. The native people also called it Chalten. [1]

In 1880, Moreno went to France, where he spoke at a meeting of the Anthropology Society of Paris, discussing two prehistoric skulls he had unearthed in Río Negro territory. He believed one was from the Quaternary period, and the other had ritual deformation in a manner similar to the skulls of the Aymara people of the Andes and Altiplano.

After his return to Argentina, that year he embarked on his second major expedition to the territory of Patagonia. He was taken prisoner by a Tehuelche aboriginal tribe and condemned to death. [2] He escaped on March 11, one day before the appointed execution. During this period he met the Tehuelche chief, Inacayal, who was hospitable to him. Later Inacayal led a resistance to the government, not surrendering until 1884.

In 1882–1883 Moreno explored the Andes from Bolivia southward, and in 1884–1885 he made new explorations of the territory south of the Río Negro and of Patagonia. He was appointed as chief of the Argentine exploring commission of the southern territories, and member of numerous European scientific societies. For his contributions to science, Moreno received a doctorate Honoris causa from the National University of Córdoba in 1877.

He is also known for his role in defending Argentine interests. He made defining surveys that led to the Boundary treaty of 1881 between Chile and Argentina. In honor to this contribution, the Argentinian glacier Perito Moreno, was named after him. These surveys and others yielded Moreno a vast collection of archaeological and anthropological data and artifacts, for which he founded an anthropological museum in Buenos Aires in 1877. [2]

In 1888, he founded the La Plata Museum of Natural History, the most important of its kind in South America. The scholar Jens Andermann has studied how Moreno's collection of artifacts at these two museums helped establish Argentine history, and the government's claim to its territory. [3] Through these scientific and cultural collections, Moreno contributed to the national mythology. [4] He brought artifacts and materials in from remote regions to be examined, catalogued and studies at the museum in the capital. Andermann has written that such museums of natural history and anthropology "enabled and justified state control of both the natural resources and indigenous populations of Argentina." [3] They also helped develop the national narratives being shaped. Moreno served as the first Director of Museo de la Plata, guiding it until 1906.

As director of La Plata Museum of Natural History Moreno sacked Florentino Ameghino in 1888 even denying him entry to the museum. [5]

In 1902 Moreno was appointed Perito (a technical specialist or expert), in which capacity he disproved Chilean claims to the continental divide in the Southern Cone. Moreno proved that many Patagonian lakes draining to the Pacific Ocean were part of the Atlantic Ocean basin. During the quaternary glaciations, they had become dammed by moraines, which changed their outlets to drain to the west and Chilean territory.[ citation needed ]

In 1903, Moreno donated some of the land previously given to him in order to establish the Nahuel Huapi National Park. He was appointed Assistant Director of the National Education Council in 1911 and helped secure funding for the Bernasconi Institute, a landmark primary school built in Buenos Aires. It was constructed on land Moreno sold to Swiss Argentine industrialist Félix Bernasconi. Its archaeological and natural history museums were created in part with his extensive collections of artifacts.

He established the Scouting and Guiding in Argentina, the Argentine Boy Scouts Association in 1912, and joined former U.S. President Theodore Roosevelt in a tour of Patagonia. He continued to oversee the La Plata Museum well after his official retirement.

In later years Moreno responded to political developments in South America at the time of World War I by joining the reactionary Argentine Patriotic League shortly before his death in 1919. Moreno was first interred in a La Recoleta Cemetery crypt. In 1944 his remains were transferred and reinterred at Centinela Isle in Lake Nahuel Huapi.

A species of Argentinian lizard, Liolaemus morenoi , is named in his honor. [6]

Patagonia is a sparsely populated region at the southern end of South America, shared by Argentina and Chile. The region comprises the southern section of the Andes Mountains, lakes, fjords, and glaciers in the west and deserts, tablelands and steppes to the east. Patagonia is bounded by the Pacific Ocean on the west, the Atlantic Ocean to the east, and many bodies of water that connect them, such as the Strait of Magellan, the Beagle Channel, and the Drake Passage to the south.

The geography of Argentina describes the geographic features of Argentina, a country located in southern South America. Bordered by the Andes in the west and the South Atlantic Ocean to the east, neighboring countries are Chile to the west, Bolivia and Paraguay to the north, and Brazil and Uruguay to the northeast.

Río Negro is a province of Argentina, located at the northern edge of Patagonia. Neighboring provinces are from the south clockwise Chubut, Neuquén, Mendoza, La Pampa and Buenos Aires. To the east lies the Atlantic Ocean.

Santa Cruz Province is a province of Argentina, located in the southern part of the country, in Patagonia. It borders Chubut Province to the north, and Chile to the west and south, with an Atlantic coast on its east. Santa Cruz is the second-largest province of the country, and the least densely populated in mainland Argentina.

Neuquén is a province of Argentina, located in the west of the country, at the northern end of Patagonia. It borders Mendoza Province to the north, Rio Negro Province to the southeast, and Chile to the west. It also meets La Pampa Province at its northeast corner. 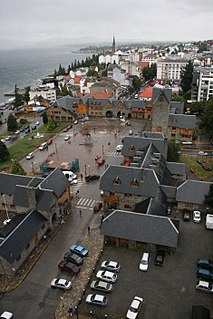 San Carlos de Bariloche, usually known as Bariloche, is a city in the province of Río Negro, Argentina, situated in the foothills of the Andes on the southern shores of Nahuel Huapi Lake. It is located within the Nahuel Huapi National Park. After development of extensive public works and Alpine-styled architecture, the city emerged in the 1930s and 1940s as a major tourism centre with skiing, trekking and mountaineering facilities. In addition, it has numerous restaurants, cafés, and chocolate shops. The city has a permanent population of 108,205 according to the 2010 census. According to the latest statistics from 2015, the population is around 122,700, and a projection to 2020 dates to 135,704.

Cerro Catedral is a mountain located 19 kilometres (12 mi) from San Carlos de Bariloche, and inside the Nahuel Huapí National Park, in Patagonia, Argentina. 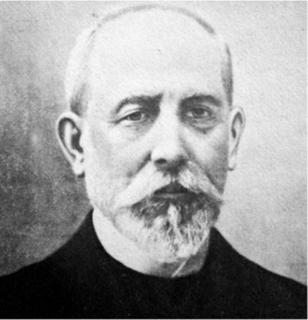 Florentino Ameghino was an Argentine naturalist, paleontologist, anthropologist and zoologist, whose fossil discoveries on the Argentine Pampas, especially on Patagonia, rank with those made in the western United States during the late 19th century. Along with his two brothers –Carlos and Juan– Florentino Ameghino was one of the most important founding figures in South American paleontology.

The Aónikenk people, also referred to by the exonym Tehuelche, are an indigenous people from Patagonia in South America, with existing members of the group currently residing in the southern Argentina-Chile borders.

Palaeospheniscus bergi is a species of the extinct penguin genus Palaeospheniscus. It stood about 60 to 75 centimetres high in life, or somewhat smaller on average than the extant African penguin.

Inacayal (1835-1888) was a cacique (chief) of the Tehuelche people in Patagonia, Argentina who led a resistance against government. They were hunter-gatherers who had a nomadic society, and had long been independent of the Argentine government established in coastal areas. He was one of the last indigenous rulers to resist the Argentine Conquest of the Desert in the late 19th century and its resultant campaigns. He did not surrender until 1884.

The La Plata Museum is a natural history museum in La Plata, Argentina. It is part of the Facultad de Ciencias Naturales y Museo of the UNLP.

The Francisco P. Moreno Museum of Patagonia is a natural history and cultural anthropology museum located in the Civic Center of Bariloche, Argentina. 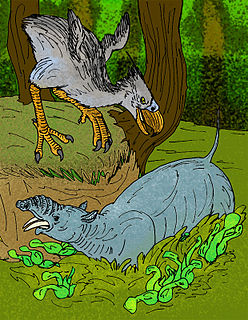 Astrapotheriidae is an extinct family of herbivorous South American land mammals that lived from the Late Eocene to the Middle Miocene 37.8 to 15.97 million years ago. The most derived of the astrapotherians, they were also the largest and most specialized mammals in the Tertiary of South America. There are two sister taxa: Eoastrapostylopidae and Trigonostylopidae.

Nahuel Huapi National Park is the oldest national park in Argentina, established in 1934. It surrounds Nahuel Huapi Lake in the foothills of the Patagonian Andes. The largest of the national parks in the region, it has an area of 7,050 km2 (2,720 sq mi), or nearly 2 million acres. Its landscapes represent the north Patagonian Andean Zone consisting of three types, namely, the Altoandino, the Andino-Patagónico and the Patagonian steppe. It also represents small parts of the Valdivian Rainforest. 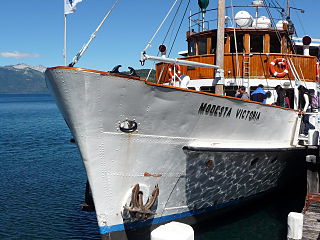 Modesta Victoria is a passenger ship which travels on the Nahuel Huapi Lake inside the National Park of the same name in Río Negro, Argentina.