Last updated September 09, 2021
Mexican hammer thrower
In this Spanish name, the first or paternal surname is Dávilaand the second or maternal family name is Robledo.

Francisco Domingo Dávila Robledo (born 1909 in Mexico City - date of death unknown) was a Mexican hammer thrower who competed in the 1932 Summer Olympics. [1]

Hato Mayor del Rey is the capital of Hato Mayor Province, Dominican Republic. It is bordered on the North by the municipalities of El Valle and Sabana de la Mar, on the South by the San Pedro de Macorís Province, on the East by the El Seibo Province and on the West by the municipality of Bayaguana, Monte Plata. It is located 27 kilometers from the San Pedro de Macorís Province and 110 kilometers from the capital city of Santo Domingo. Hato Mayor del Rey has a population of 70,141 inhabitants, and is divided into three municipal districts: Yerba Buena, Guayabo Dulce and Mata Palacio.

José Fernando Santa Robledo is a retired football defender who played at international level for Colombia. He played two matches at the 1998 FIFA World Cup, and his club at that time was Atlético Nacional. He also appeared at the 1992 Summer Olympics.

Spain competed at the 1928 Summer Olympics in Amsterdam, Netherlands. 80 competitors, all men, took part in 34 events in 10 sports.

Agustín Dávila Padilla was a Mexican Dominican, a writer and Bishop of Santo Domingo. 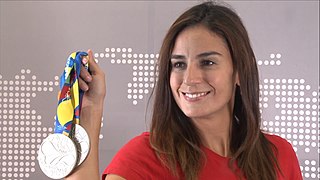 Juan José Veloz Dávila is an Olympic and national record-holding swimmer for Mexico. He swam for his native country at the 2000, 2004, and 2008 Olympics.

The women's 200 metre breaststroke event, included in the swimming competition at the 1968 Summer Olympics, took place on October 22–23, at the Alberca Olímpica Francisco Márquez. In this event, swimmers covered four lengths of the 50-metre (160 ft) Olympic-sized pool employing the breaststroke. It was the tenth appearance of the event, which first appeared at the 1924 Summer Olympics in Paris. A total of 31 competitors from 20 nations participated in the event. American Catie Ball was the large favourite to win the event, as she had broken the world record in this event the last three times. However, she was suffering from a virus infection and was forced to withdraw from the heats. Her 16-year-old teammate Sharon Wichman won the event, breaking bronze medalist Galina Prozumenshchikova's Olympic record in the final. 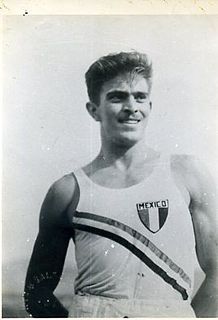 Carlos de Anda Dominguez was an accomplished Mexican sprinter who competed internationally, eventually reaching the 1932 Summer Olympics, and qualifying for the 1936 Summer Olympics.

Bernardo Hernández Villaseñor is a Mexican former footballer who competed in the 1968 Summer Olympics.

Robledo is both a surname and a given name. Notable people with the name include:

The Asociación Deportiva Mexicana de Básquetbol (ADEMEBA) is the governing body of basketball in Mexico. It was established in 2008.

Guillermo Davila is a Mexican former swimmer. He competed in the men's 400 metre individual medley at the 1964 Summer Olympics.

Juan Manuel Dávila is a Guatemalan footballer. He competed in the men's tournament at the 1988 Summer Olympics.

Rodolfo Dávila was a Mexican wrestler. He competed in the men's freestyle flyweight at the 1952 Summer Olympics.