At the time of his death, Cavanaugh was broke and blind. He warned fellow coach and former player Joe McKenney "Get out of coaching while you can. The end of every coaching career is disaster." [2]

Jerry Lee Tagge is a former American football player. He played college football as quarterback at the University of Nebraska–Lincoln, where he led the Nebraska Cornhuskers to consecutive national championships in 1970 and 1971. Tagge played professionally with the Green Bay Packers of the National Football League (NFL) from 1972 to 1974, the San Antonio Wings of the World Football League (WFL) in 1975, and the BC Lions of the Canadian Football League (CFL) from 1977 to 1979. 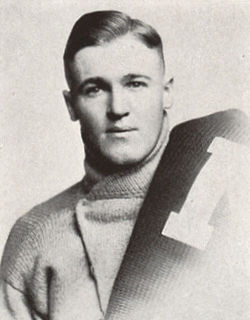 Trev Kendall Alberts is an American sports administrator and the director of athletics at the University of Nebraska Omaha. In 2014 Alberts was selected to be Vice Chancellor in addition to his current duties as Director of Athletics. Alberts is a former American college and professional football player. He played college football for the University of Nebraska, and earned All-American honors at linebacker. He played professionally for the Indianapolis Colts of the National Football League (NFL) for three seasons, after having been fifth overall pick in the 1994 NFL Draft. Later, he became a television and print college football commentator, most notably working alongside Mark May on ESPN's College GameDay Scoreboard show. In January 2015, Alberts was among 15 players and two coaches selected to the College Football Hall of Fame. 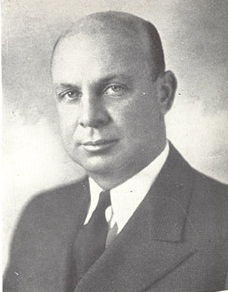 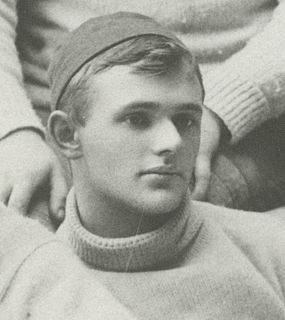 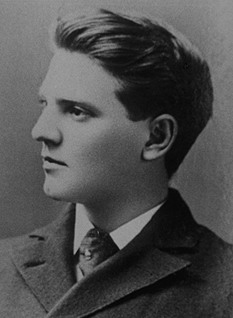 Edward Kimball Hall was an American football and baseball player and coach, college athletics administrator, lawyer, and business executive. He played college football at Dartmouth College from 1889 to 1891 and then served as the athletic director and head football and baseball coach at the University of Illinois from 1892 to 1894. 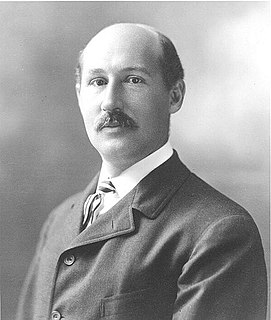 The 1913 College Football All-America team is composed of college football players who were selected as All-Americans for the 1913 college football season. The only two selectors who have been recognized as "official" selectors by the National Collegiate Athletic Association (NCAA) for the 1913 season are Walter Camp and the International News Service (INS). Camp's All-America Team was published in Collier's Weekly. The INS was founded in 1909 by William Randolph Hearst, and its sports editor Frank G. Menke selected the INS All-America team. Other sports writers, newspapers, coaches selecting All-America teams in 1913 included Harper's Weekly, Fielding H. Yost, and Parke H. Davis. 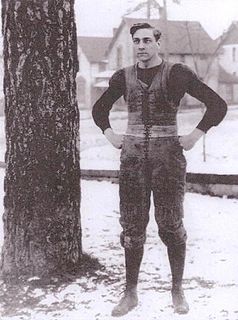 Wesley Theodore "Moose" Englehorn was an American football player and coach. Born in Helena, Montana, Englehorn first gained fame as a football player for Spokane High School. While he was a junior in high school, he was reportedly recruited by Princeton University to come east to play football for the school. A newspaper account in 1907 reported: "It is expected that Wesley Englehorn, the giant left tackle of the high school team, will also enter the Eastern college. If this materializes the Spokane high school will be weakened next year by the loss of two of its greatest players. ... Englehorn is also a strong basket ball player and track athlete." Englehorn did not enroll at Princeton and instead played for two years on the All Star Pacific Northwest football and basketball teams. He began his collegiate career at Washington State College. After playing one year of football at Washington State, Englehorn enrolled at Dartmouth College, where he played two years at the tackle position. He was elected team captain for the 1913 season, but he was declared ineligible under "the so-called three-year rule" because of his year at Washington State. Though ineligible to play, Englehorn served as the team's assistant coach in 1913 and was elected class president. He was selected as a first-team All-American in 1912. He graduated from Dartmouth in 1914 and worked as a football coach for several years thereafter. From 1914 to 1916, he was the football coach at Case School of Applied Science in Cleveland, Ohio. In 1917, he was hired as the line coach and first assistant football coach at Colgate University. In 1920, he was an assistant coach under Frank Cavanaugh at Boston College. In 1921, he was hired as the head football coach at Amherst College. In January 1922, Englehorn announced his retirement from coaching. Shortly before his death at age 103, Englehorn said, "It's the football I remember best ... the teammates .. the teamwork." Prior to his death in 1993, he was living at Stapeley Hall, a home for the elderly in the Germantown section of Philadelphia, Pennsylvania, and was the oldest living All-American football player.

Roger A. Hughes is an American football coach and former player. He served as the head coach at Princeton University from 2000 to 2009, and amassed a 47–52 record. He has been named the newest head coach at Stetson University, which is reviving their program after a hiatus of more than 50 years beginning with the 2013 season.

The Ram–Crusader Cup is the name of the trophy awarded to the winner of the annual football game between the Fordham Rams and the Holy Cross Crusaders. Both schools are members of the Patriot League.

The Iron Major is a 1943 American biographical film about the famed college football coach and World War I hero, Frank Cavanaugh. Directed by Ray Enright, the screenplay was written by Aben Kandel and Warren Duff, based on Florence E. Cavanaugh's story.