Frank Fixaris (May 6, 1934 in Torrington, Connecticut – January 13, 2006 in Falmouth, Maine) was an American sportscaster, anchor, reporter, and disc jockey, spending the majority of his career at WGME-TV in Portland, Maine. He also, along with partner Dave "Shoe" Schumacher, co-hosted a morning radio show on WJAB after his television run. "Shoe" continues to co-host the show, known as "The Morning Jab", with present partner, Joe Palmieri.

Fixaris attended college in Boston, Massachusetts and graduated from Emerson College in 1956. He then worked at several radio stations early in his career before taking the job as a sports anchor at WGME in 1965 (then WGAN) and continued there until 1995. He served as sports director there from 1967 until 1992. Coincidentally Fixaris' cousin, former Major League Baseball player Jimmy Piersall, also worked as a sportscaster.

He was the color commentator of the Maine Mariners [ permanent dead link ], and later the Portland Pirates of the American Hockey League. Although offered several network positions (particularly with CBS, as well as the New York Islanders), he chose to remain in Maine. He was co-awarded one of the James H. Ellery Memorial Awards by the AHL for his outstanding work in 1978. In honor of his many years of work with the Mariners/Pirates, the press box at the Cumberland County Civic Center bears his name as a memorial tribute. A 2006 inductee into the Maine Association of Broadcaster's hall of fame, Fixaris is also remembered annually with an award in his name issued by the Portland Fire Department, as well as two scholarships for students studying communication science at Saint Joseph's College of Maine .

The Fix Cup , a former annual high school hockey tournament in Portland (modeled after the Beanpot tournament), was named after Fixaris.

He was known as having an encyclopedic knowledge of all things sports, especially at the local level. Popular broadcasters Mike Emrick, Dale Arnold, Tom Caron, Scott Wykoff and J.J. Jeffrey considered him as being instrumental in their development.

Fixaris died in a fire at his home on January 13, 2006. He is survived by his wife, Barbara, and a son, Michael. His brother, Richard, died in December, 2013. He is buried at Evergreen Cemetery in Portland, Maine.

WGME-TV, virtual channel 13, is a CBS-affiliated television station licensed to Portland, Maine, United States, serving southern Maine as well as eastern and northern New Hampshire. The station is owned by the Hunt Valley, Maryland-based Sinclair Broadcast Group, which also operates Waterville-licensed Fox affiliate WPFO under a local marketing agreement (LMA) with owner Cunningham Broadcasting. However, Sinclair effectively owns WPFO as the majority of Cunningham's stock is owned by the family of deceased group founder Julian Smith. The two stations share studios on Northport Drive in the North Deering section of Portland; WGME-TV's transmitter is located on Brown Hill west of Raymond. The station also maintains regional studios in the Lewiston/Auburn area, and the state capital in Augusta.

Michael "Doc" Emrick is an American former network television play-by-play sportscaster and commentator noted mostly for his work in ice hockey. He was the lead announcer for National Hockey League national telecasts on both NBC and NBCSN. Among the many awards Emrick has received is the NHL's Lester Patrick Award in 2004, making him the first of only five to have received the award for media work, and the Foster Hewitt Memorial Award by the Hockey Hall of Fame in 2008. He has also won nine national Emmy Awards for excellence in sports broadcasting, the only hockey broadcaster to be honored with even one. On December 12, 2011, Emrick became the first member of the media to be inducted into the United States Hockey Hall of Fame. In 2017, Sports Illustrated listed Emrick as the sportscaster of the year.

Warner William Wolf is an American television and radio sports broadcaster, perhaps best known as a local news sports anchor in Washington, D.C. and New York City, and for his catchphrase "Let's go to the videotape!" He was also known for referring to the “foul pole” as the ”fair pole.”

Eric Frede is an American sportscaster who has worked for NESN since 2002. He was previously the play-by-play announcer for NESN College Football Saturday broadcasts until he left NESN and joined NBC Sports Boston and is currently an anchor for the SportsNet Central. 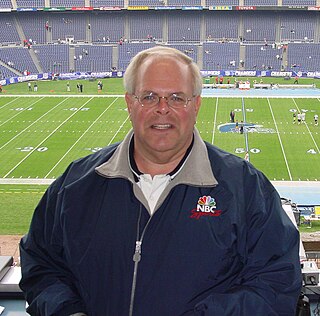 Dale Everett Arnold is a New England sportscaster. He hosts Boston Bruins broadcasts on NESN and co-hosted talk radio shows on WEEI until his retirement from radio on March 12, 2021, announced the day before. He was the Bruins' play-by-play announcer on NESN and has called Boston College Eagles football. He is the only person to have done play-by-play broadcasts for all five of the Boston area's major professional sports franchises.

Tom Caron is a sportscaster and anchor on New England's NESN network.

Ken Wilson is an American sportscaster, known primarily for his many years as a play-by-play announcer of National Hockey League and Major League Baseball games.

David Sims is an American sportscaster. He currently is the television play-by-play commentator for the Seattle Mariners. Sims was the 2018, 2019 and 2020 National Sports Media Association's Washington state Sportscaster of the Year. He is in his 16th season as the co-host of Basketball and Beyond with Coach K on Sirius XM Satellite Radio. In 2009 Sims was also the television play-by-play host for the UFL on Versus.

J.J. Jeffrey is an American radio executive and a former prominent Top 40 disc jockey. His work aired on United States' rock-and-roll stations during the 1960s and 1970s.

Joe D'Ambrosio is an American sports broadcaster and play-by-play announcer.

Jim Kelly is an American sportscaster who has worked for ESPN and CBS Sports. 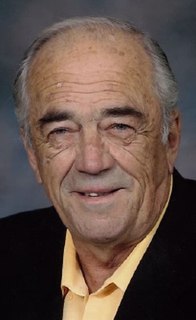