Hill was born in Forfar and started his career at Forfar Athletic, joining the club in 1924. [5] He moved to Aberdeen in 1928 and played over 100 Scottish Division One matches. A right-half (which was more or less the equivalent of a defensive midfield position), Hill earned the nickname "Tiger" for his "tigerish" tackling. During his four years at Aberdeen, he also won three caps for Scotland (between 1930 and 1931). [3]

Hill left Aberdeen under something of a cloud, being one of five players dropped by manager Paddy Travers in November 1931. At the time, the reasons were not clear, but the club's official history claims that several players had been involved in a betting scandal. No players were ever charged with any offence, but none of them ever played for Aberdeen again. [6] Hill had played a total of 106 times for Aberdeen, scoring 10 goals. [7]

In 1932, he was signed by Herbert Chapman's Arsenal, who had just finished as runners-up in both the First Division and FA Cup. He made his debut against Blackburn Rovers on 15 October 1932. At the time, Arsenal were spoilt for wing-halves and Hill competed for his place with Charlie Jones, Bob John, Wilf Copping and Jack Crayston. Despite this, Hill featured in all three of Arsenal's 1933, 1934 and 1935 League title campaigns. He also won the 1934 Charity Shield with the Gunners. Hill usually played at right-half but also deputised at left-half or even on the wing. [8]

Hill was squeezed out of the side by Copping and Crayston, and only featured in ten matches in 1935–36, and did not play in Arsenal's FA Cup final victory that season. He requested a transfer and was sold to Second Division Blackpool in the summer of 1936. In all he played 81 games for Arsenal, scoring four goals. [9]

Hill captained Blackpool in the 1936–37 season, helping them to runners-up spot and thus promotion to the First Division. However, he didn't stay in the top flight for long as in September 1937 he joined Second Division side Southampton. [8]

In May 1937, Hill was recruited by Tom Parker to join Southampton as part of his drive to strengthen the team in an attempt to gain promotion from the Second Division, along with David Affleck (from Clapton Orient), Billy Bevis (from Portsmouth) and Ray Parkin (from Middlesbrough). Southampton paid £2000 for his services and acquired "a half-back with a strong personality and ball-winning abilities". [10] Hill's resolve and leadership helped steer Saints away from relegation during 1937–38, only for him to suffer a series of injuries the following season which sidelined him for long periods. [10]

Hill eventually fell out with the Board of Directors when it was revealed that he had secretly applied for various managerial positions and he left the club in 1939 to take up a position as assistant trainer at Preston North End, although Southampton refused to release his player registration until 1943. He made 53 appearances for Southampton, scoring three goals. [10]

During the Second World War, when football was suspended, Hill served in the Royal Air Force in India. [8]

He then moved abroad in January 1957, coaching the Iraqi military team as well as Iraqi club Al-Quwa Al-Jawiya, [13] before returning to take over at Notts County in 1958. [2] He helped County to promotion to the Third Division in 1959–60, and moved to Charlton Athletic, who were bottom of the Second Division, in 1961. He saved Charlton from relegation that season and took them to fourth in 1963–64. However, he could not make the good form last and was sacked in the summer of 1965.[ citation needed ]

Hill finished his career as a scout for Manchester City, before retiring. He moved with his wife Doris and son David to Lafayette, California, USA in 1967 where they owned "Piccadilly Circus Fish'n Chips" and he refereed locally at the college level well into his 70s.[ citation needed ] 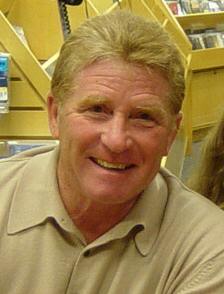 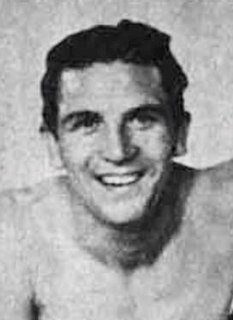 Thomas Robert Parker was an English footballer and manager. Parker played as a right back for clubs Arsenal and Southampton in his playing career. As a manager he was at the helm of Southampton as well as Norwich City.

John Burridge, nicknamed Budgie, is an English former goalkeeper who is now working with Indian Super League club Kerala Blasters as their goalkeeping consultant and senior goalkeeping coach for their goalkeeping academy. In his senior career he played for 29 clubs, 18 of them in the Football League, in a career that lasted nearly 30 years. Overall, Burridge played 768 league games in the English and Scottish leagues, and several more at non-league level.

John Tait Robertson was a Scottish football player and manager who played as a central defender. He won 16 caps for his country, scoring three goals.

Hugh Donnelly Fisher is a Scottish former professional footballer who played for Southampton between 1966 and 1976 and was a substitute in the 1976 FA Cup Final. 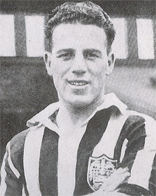 Robert Joseph Finan was a Scottish professional footballer. He played as a forward.

William Issacher Garfield Kingdon was an English footballer who played, as a wing-half, over 240 games for Aston Villa. Towards the end of his career, he joined Southampton, before becoming a manager in lower-league football.

Robert John Buchanan was a Scottish international footballer, who played as a forward in the 1890s.

John Arkison McIlwaine was a Scottish footballer who played as a centre half for Portsmouth, where he captained the team in the 1929 FA Cup Final, before moving to south coast rivals Southampton. He also played for Falkirk and Llanelly, whom he helped win the Welsh Football League championship in 1932–33.

John Samuel Foster was an English footballer who played as a forward for various clubs in the 1900s. After retiring as a player, he became a manager.

James Soye was a Scottish professional footballer who played as an inside-forward for various clubs in Scotland, Ireland and England in the period prior to World War I.

Robert Campbell Forsyth was a Scottish footballer, who played as a goalkeeper for St Mirren, Kilmarnock and Southampton. He also made four international appearances for Scotland, all in 1964.

The 1922–23 season was the 28th season of competitive football by Southampton, and the club's first in the Second Division of the Football League. Having secured promotion from the Third Division South as champions the previous season, the largely unchanged Saints team avoided relegation comfortably and finished in the middle of the league table in their first season as a second-flight club. After a poor start to the campaign in which they picked up only one point from their first five matches, Southampton began to improve in form and move up from the Second Division relegation zone. The club picked up several wins over higher-placed opponents challenging for the division's two promotion places, allowing them to finish mid-table. Southampton finished in 11th place with 14 wins, 14 draws and 14 losses, and an even goal average.

The 1924–25 season was the 30th season of competitive football by Southampton, and the club's third in the Second Division of the Football League. Following the 1923–24 season, in which the club finished just three points shy of the First Division promotion places in fifth place, the Saints dropped two positions to finish seventh in the league. As with the last season, Southampton began their Second Division campaign poorly and found themselves at the bottom of the table after two losses in their first three games. The side continued to struggle to pick up wins, but steadily began making their way up the table over the next few months. A number of wins over the Christmas period and an eight-game unbeaten run at the end of the season helped Southampton finish in seventh place with 13 wins, 18 draws and 11 losses.

The 1925–26 season was the 31st season of competitive football by Southampton, and the club's fourth in the Second Division of the Football League. After finishing in the top half of the league table in their first three seasons in the division, Southampton had their worst year to date in the second flight when they finished in 14th place, ending just six points above the first relegation position. The club suffered a string of losses at the beginning of the campaign, leaving them with points to make up in later months. Former player Arthur Chadwick was brought in as Southampton's new manager in October, and the club subsequently secured their position in the Second Division with a run of wins over the Christmas period, despite continuing to lose points. The club finished in 14th place with 15 wins, eight draws and 19 losses.

The 1926–27 season was the 32nd season of competitive football by Southampton, and the club's fifth in the Second Division of the Football League. After having their worst year in the division the previous season, Southampton began the 1926–27 league campaign in strong fashion and found themselves in amongst the promotion hopefuls by the end of the year, just two points off front-runners Middlesbrough. However, following a lengthy run in the FA Cup the club's form began to deteriorate, ending with a series of 13 games which included just one win. The Saints dropped from as high as the top six of the Second Division table to a mid-table position, ending the season in 13th place with 15 wins, 12 draws and 15 losses – just one position and four points higher than their 14th-place finish the previous season.

The 1933–34 season was the 39th season of competitive football by Southampton, and the club's 12th in the Second Division of the Football League. The season was another mediocre campaign for the Saints, who finished in the bottom half of the Second Division table for the fifth time since joining the league. The club equalled their Football League record of 15 home wins from 21 games, but failed to win a single away fixture all season, continuing a club record run of 33 games without an away which started late the last season and continued until December 1934. Despite starting the season strongly and spending months in the top half of the table, Southampton finished the 1933–34 season in 14th place with 15 wins, eight draws and 19 losses, just five points above Millwall in the first relegation spot.