Moore was one of the NEA-funded artists targeted by Jesse Helms and the GAO (General Accounting Office) in the early 1990s for creating art that was labeled "obscene". [7] He was featured in the 1988 cult film Mondo New York , which chronicled the leading performance artists of that period.

Moore was born with cerebral palsy, could not walk or talk, and communicated using a laser-pointer and a board of letters, numbers, and commonly used words. Using his pointer, he wrote books, directed plays, directed, acted in and edited films, and regularly gave poetry readings. Moore played piano, sang in ensemble music jams, and led bands in hard core punk clubs all along the West Coast of the United States until his death. He also produced, and exhibited across the United States and Canada, a large collection of original oil and digital paintings.

Moore was known for his long (5–48 hours) ritualistic performances with audience participation, nudity, and eroticism. [8] His writings on performance, [3] art, [9] life, [10] [11] [12] and cultural subversion, [13] and his performance/video archive on Vimeo.com seen by over 32 million people, further influence Moore's legacy.

Moore coined the word "eroplay" to describe physical play between adults released from the linear goals of sex and orgasm. [14] He explored this and similar concepts in performance and ritual as a way for people to connect on a deeper level beyond the social and cultural expectations and limitations. [15]

Frank Moore first came to be known in the 1970s as the creator of the popular cabaret show, the "Outrageous Beauty Revue". In the 1980s Moore attended the San Francisco Art Institute where he earned his M.F.A. in Performance/Video in 1983. [16] At this school Moore discovered that the work that he had been doing for over a decade was called performance art. [17] In 1992 he was voted Best Performance Artist by the San Francisco Bay Guardian . In the early 1990s Moore was targeted by Senator Jesse Helms. [1] [18] From 1991 to 1999 Moore published and edited the underground zine The Cherotic (r)Evolutionary. [19] [20]

In addition to his books, Cherotic Magic, Art of a Shaman, Chapped Lap, Skin Passion and numerous other self-published pieces, Moore was widely published in various art and other periodicals. In artist Pamela Kay Walker's book, Moving Over the Edge, Moore is one of the artists featured as having "greatly impacted me and many people through their artistic expression and their lives." [5]

Moore's Vimeo account was terminated by Vimeo in August 2019. Starting that same month, all of the videos have been moved to the Frank Moore Archives on the Internet Archive. [27]

Frank Moore's Web of All Possibilities features a growing archive of his audio, video, visual and written work, as well as the work of other artists. He founded Love Underground Visionary Revolution (LUVeR) in 1999, a webstation combining live streaming and on-demand libraries of audio and video programming, [19] described by Moore as a "non-corporate, d.i.y., totally uncensored, noncommercial, nonprofit internet-only communal collective with 24-hour 'live' programming (by amazing people) with 'no-limits' content." LUVeR ran until 2012.

In 2006, Moore announced his candidacy for the 2008 election for President of the United States. [28] He became a qualified write-in candidate in 25 states. His campaign was responsible for reforming the write-in candidate qualifications and procedures in many states. His platform videos are available on YouTube.

Moore also hosted his regular internet show, Frank Moore's Shaman's Den. Moore describes it as a show that "will arouse, inspire, move, threaten you, not with sound bites, but with a two-hour (usually longer) feast of live streaming video. You might get an in-studio concert of bands from around the world...or poetry reading...or an in-depth conversation about politics, art, music, and LIFE with extremely dangerous people! But then you may see beautiful women naked dancing erotically. You never know, because you are in The Shaman's Den with Frank Moore." Video and audio archives of all of these Shaman's Den shows are available online.

Frank Moore died of pneumonia on October 14, 2013. [29] He performed regularly in the San Francisco Bay Area up until his death.

Performance artist Annie Sprinkle considers Moore one of her teachers, [30] and Moore performed with a host of performance and underground punk figures since the 1970s. [31] including Barbara Smith, Linda Sibio, The Feederz, and Dirk Dirksen - The Pope of Punk. [32]

Frank Moore's life and art are now being documented in a web video series called Let Me Be Frank. [33]

As of September 2017, Frank Moore's work is now being archived at the Bancroft Library at the University of California, Berkeley. [34] The collection is titled “Frank Moore papers, approximately 1970-2013.” [35]

In 2019, a collection of Frank Moore's work was archived at the Performistanbul Live Art Research Space in Istanbul, Turkey. [38] [39]

As of March 2021, a documentary film about Frank Moore by Keith Wilson is currently on a pause in production due to the COVID-19 pandemic. Production is projected to resume in Summer 2021 with a possible premiere of the film in early 2023. [40] 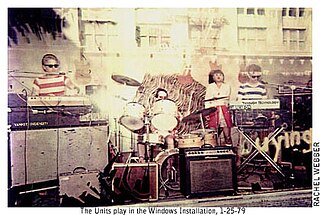 The Units were an American synthpunk band, founded in San Francisco in 1978 and active until 1984. They were one of America's earliest electronic new wave bands, and have been cited as pioneers of synthpunk, also retrospectively known as "electropunk". The Units were notable for their use of synthesizers in place of guitars, and multimedia performances featuring multiple projections of satirical, instructional films critical of conformity and consumerism. 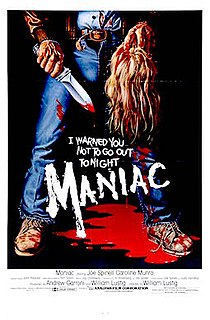 Maniac is a 1980 American psychological slasher film directed by William Lustig and written by C. A. Rosenberg. It stars Joe Spinell as Frank Zito, an Italian-American serial killer residing in New York City who murders and scalps young women. Spinell was also co-writer of the film.

Ant Farm was an avant-garde architecture, graphic arts, and environmental design practice, founded in San Francisco in 1968 by Chip Lord and Doug Michels (1943-2003). Ant Farm's work often made use of popular icons in the United States, as a strategy to redefine the way those were conceived within the country's imagination. 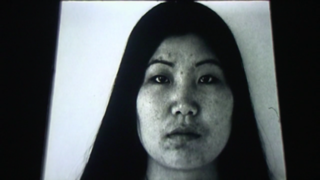 Theresa Hak Kyung Cha was an American novelist, producer, director, and artist of South Korean origin, best known for her 1982 novel, Dictee. Cha was considered to be an avant-garde artist. Cha was fluent in Korean, English, and French. In her works, Cha took language apart and experimented with it. Cha's interdisciplinary background was clearly evident in Dictee, which experiments with juxtaposition and hypertext of both print and visual media. Cha's Dictee is taught in contemporary literature classes including women's literature. 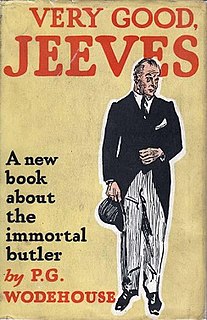 Very Good, Jeeves is a collection of eleven short stories by P. G. Wodehouse, all featuring Jeeves and Bertie Wooster. It was first published in the United States on 20 June 1930 by Doubleday, Doran, New York, and in the United Kingdom on 4 July 1930 by Herbert Jenkins, London. The stories had all previously appeared in Strand Magazine in the UK and in Liberty or Cosmopolitan magazines in the US between 1926 and 1930.

Lawrence R. Rinder is a contemporary art curator and museum director. He directed the Berkeley Art Museum and Pacific Film Archive (BAMPFA) from 2008 to 2020.

Andrea Rose Fraser is a performance artist, mainly known for her work in the area of Institutional Critique. Fraser is based in New York and Los Angeles and is currently Department Head and Professor of Interdisciplinary Studio of the UCLA School of Arts and Architecture at the University of California, Los Angeles.

The Berkeley Art Museum and Pacific Film Archive are a combined art museum, repertory movie theater, and archive associated with the University of California, Berkeley. Lawrence Rinder was Director from 2008, succeeded by Julie Rodrigues Widholm in August, 2020. The museum is a member of the North American Reciprocal Museums program. 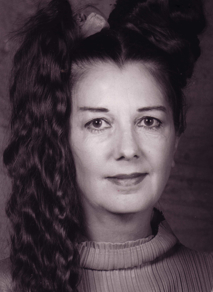 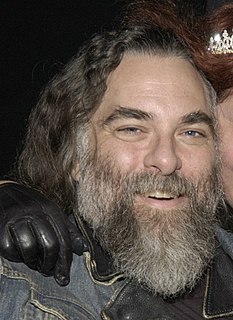 Nayland Blake is an American artist whose focus is on interracial attraction, same-sex love, and intolerance of the prejudice toward them. Their mixed-media work has been variously described as disturbing, provocative, elusive, tormented, sinister, hysterical, brutal, and tender.

Rosie Lee Tompkins (1936–2006) is the art pseudonym of Effie Mae Martin Howard, a widely-acclaimed African-American quiltmaker and fiber artist of Richmond, California. The New York Times called her "one of the great American artists," and her work "one of the century’s major artistic accomplishments." More than 500 works by Tompkins reside at the Berkeley Art Museum.

Ari Marcopoulos is an American self-taught photographer, adventurer and film artist. Born in the Netherlands, he is best known for presenting work showcasing elusive subcultures, including artists, snowboarders and musicians. He lives and works in New York. Marcopoulos is represented by Fergus McCaffery in New York and Tokyo, and Galerie Frank Elbaz in Paris.

Howard Fried is an American conceptual artist who became known in the 1970s for his pioneering work in video art, performance art, and installation art.

Tom Marioni is an American artist and educator, known for his conceptual artwork. Marioni was active in the emergence of Conceptual Art movement in the 1960s. He founded the Museum of Conceptual Art (MOCA) in San Francisco from 1970 until 1984.

Jeff Kelley is an art critic, author, and curator. A practicing art critic since 1977, his reviews and essays about artists including Chinese conceptual artist Ai Weiwei have appeared in publications including Artforum, Art in America, and the Los Angeles Times.

Tony Labat is a Cuban-American multimedia and installation artist. He has exhibited internationally over the last 40 years, developing a body of work in performance, Video, sculpture and Installation. Labat's work has dealt with investigations of the body, popular culture, identity, urban relations, politics, and the media. His work is included in the collection of the Museum of Modern Art, New York.

Olya Dubatova is a Russian born visual artist. Since 2008 she has exhibited internationally. She lives in California and New York City.

Jacquelynn Baas is an independent curator, cultural historian, writer, and Director Emeritus of the University of California Berkeley Art Museum and Pacific Film Archive. She has published on topics ranging from the history of the print media to Mexican muralism to Fluxus to Asian philosophies and practices as resources for European and American artists.