Müntefering was born in Neheim (now part of Arnsberg). He trained as an industrial salesman and worked for local metalwork companies. [1]

Müntefering was Bundesgeschäftsführer (executive director) of the national SPD from 1995 to 1998. In this capacity, he managed the 1998 campaign that returned the SPD to power in the federal government after 16 years in opposition. [2]

From 1998 until 1999, Müntefering briefly held the post of Minister of Transportation and Construction in the first cabinet of Chancellor Gerhard Schröder. In this capacity, he organized the government's move from Bonn to Berlin. [3]

Müntefering was the first to hold the new post of SPD Secretary General from 1999 to 2002, and thereafter became leader of the SPD parliamentary group in the Bundestag. In February 2004 he was designated to succeed Schröder as party chairman in March 2004. [4]

Following Schröder’s defeat in the close 2005 elections, Müntefering helped form a grand coalition under the new Chancellor Angela Merkel and her center-right CDU/CSU parties. [5] During the coalition talks, on 31 October 2005, Müntefering's favoured candidate for Secretary General of the SPD, Kajo Wasserhövel, was defeated by the left-wing candidate Andrea Nahles in a preliminary internal election. Müntefering subsequently announced his intention to resign as SPD Chairman, and was succeeded by Matthias Platzeck at the next party convention on 15 November 2005.

Müntefering became Federal Minister of Labour and Social Affairs and Vice-Chancellor in the cabinet of Chancellor Angela Merkel on 22 November 2005. During his time in office, the government agreed to raise the retirement age in steps to 67 from 65 by 2029.

After two years in those posts, Müntefering's spokesman said on 13 November 2007 that Müntefering would resign from them later in the month. The decision was said to be based on "purely familial reasons". [6] Later in the day, Müntefering said that he would leave his positions in the government on 21 November attributing his decision to the illness of his wife, Ankepetra, who was suffering from cancer. [7] Upon leaving office on 21 November 2007, he was replaced as Vice-Chancellor by Frank-Walter Steinmeier and as Minister of Labor by Olaf Scholz, both of whom are also members of the SPD. [8]

Müntefering's wife Ankepetra died on 31 July 2008. Following her death, Müntefering decided to return to active politics and was elected Chairman of the Social Democratic Party of Germany on 18 October 2008. [9] On 7 September 2008, Kurt Beck had resigned as SPD Chairman. [9] [10]

Following the SPD's defeat in the federal election of 2009, Müntefering resigned from the position of party chairman of the Social Democratic Party.

In April 2005, Müntefering criticized the market economy of Germany and proposed more state involvement to promote economic justice. In this speech, he described private equity firms as "locusts". He subsequently published a "locust list" of companies, which he circulated within the SPD. [11] This began a debate which dominated the national news, being the subject of front-page articles and covered on the main television news broadcasts nearly every day. Müntefering's suggestions were criticized by employers and many economists, but met with popular support (up to 75% in some opinion polls). The word has since found its way into German language as an established term for shady financial business practices.

Since leaving active politics, Müntefering has held a variety of honorary positions, including the following:

Müntefering was a SPD delegate to the Federal Convention for the purpose of electing the President of Germany in 2017. [15]

In 2002, news surfaced that, while Müntefering was head of the SPD in the North Rhine-Westphalia during the 1990s, local officials in the city of Cologne and possibly elsewhere allegedly engaged in corruption that involved illegal political donations from builders of waste-disposal facilities. Müntefering denied any knowledge of the anonymous donations and launched an internal investigation into all contracts awarded for the construction of waste-disposal facilities in North Rhine-Westphalia in the 1990s. On March 22, he testified about the affair before Parliament's investigative committee. [2] 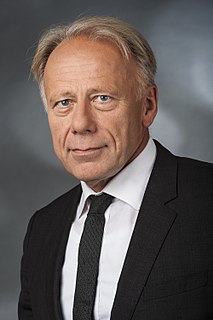 Jürgen Trittin is a German Green politician. He was Federal Minister for the Environment, Nature Conservation and Nuclear Safety from 1998 to 2005 in Germany.

Wolfgang Clement is a German politician. Clement was a member of the Social Democratic Party of Germany (SPD). He was the 7th Minister President of the state of North Rhine-Westphalia from 27 May 1998 to 22 October 2002 and Federal Minister for Economic Affairs and Labour from 2002 to 2005. 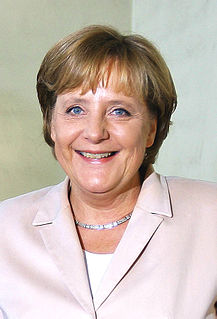 Federal elections were held in Germany on 18 September 2005 to elect the members of the 16th Bundestag. This became necessary after a motion of confidence in Chancellor Gerhard Schröder failed on 1 July. Following the defeat of Schröder's Social Democratic Party (SPD) in a state election, Schröder asked his supporters to abstain from the Bundestag motion, knowing the motion would fail and thus triggering an early federal election.

Peer Steinbrück is a German politician who was the chancellor-candidate of the Social Democratic Party (SPD) in the 2013 federal election. Steinbrück served as the 8th Minister-President of North Rhine-Westphalia from 2002 to 2005, a member of the Bundestag from 2009 to 2016, and as Federal Minister of Finance in the first Cabinet of Chancellor Angela Merkel from 2005 to 2009. 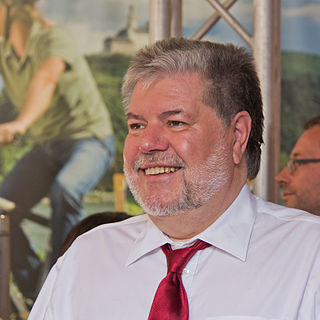 Kurt Beck is a German politician (SPD), who served as the 7th Minister President of Rhineland-Palatinate from 1994 to 2013 and as the 55th President of the Bundesrat in 2000/01. On 14 May 2006 he succeeded Matthias Platzeck as chairman of the German Social Democratic Party (SPD). He resigned from that post on 7 September 2008.

Andrea Maria Nahles is a German politician who served as Leader of the Social Democratic Party (SPD) from April 2018 until June 2019 and the leader of the SPD in the Bundestag from September 2017 until June 2019. She served as a Federal Minister of Labour and Social Affairs from 2013 to 2017 and SPD Youth leader. She is known within the party for criticising Gerhard Schröder's Agenda 2010. In June 2019, in the aftermath of the SPD's result in the 2019 European elections, she announced her resignation as leader of the SPD and as parliamentary leader of the SPD. For the transition period until a new SPD-leader is voted in, Manuela Schwesig, Malu Dreyer and Thorsten Schäfer-Gümbel act as her successors. Nahles left the Bundestag on 31 October 2019.

Hubertus Heil is a German politician. In 2005 he became general secretary of the Social Democratic Party of Germany (SPD). In September 2009, after immense losses for the SPD during the German federal election, Heil announced his resignation from this position for November. Andrea Nahles succeeded him as general secretary in November 2009. After Katarina Barley's appointment as Federal Minister of Family Affairs, Senior Citizens, Women and Youth, he briefly returned to the office from 2 June to 8 December 2017. On 14 March 2018 Heil was appointed Federal Minister of Labour and Social Affairs in the fourth Merkel cabinet.

The first Merkel cabinet was the Government of the Federal Republic of Germany from 22 November 2005 to 27 October 2009 throughout the 16th legislative session of the Bundestag. Led by Christian Democrat Angela Merkel, the first female Chancellor in German history, the cabinet was supported by a grand coalition between the Christian Democratic Union (CDU), Christian Social Union of Bavaria (CSU) and the Social Democratic Party (SPD).

Olaf Scholz is a German politician serving as Federal Minister of Finance and Vice Chancellor under Chancellor Angela Merkel from the CDU since 14 March 2018. He served as First Mayor of Hamburg from 7 March 2011 to 13 March 2018 and Acting Leader of the Social Democratic Party (SPD) from 13 February to 22 April 2018.

Thomas Ludwig Albert Oppermann is a German politician and member of the Social Democratic Party (SPD). Since October 2017 he has been Vice President of the Bundestag. He served as First Secretary (2007-2013) and later as chairman (2013-2017) of the SPD Parliamentary Group in the Bundestag.

Gerhard Fritz Kurt Schröder is a German politician who served as Chancellor of Germany from 1998 to 2005, during which his most important political initiative was Agenda 2010. As a member of the Social Democratic Party of Germany (SPD), he led a coalition government of the SPD and the Greens.

Karl-Josef Laumann is a German politician of the German Christian Democratic Union. Since 2017, he has been the State Minister of Labor, Health and Social Affairs of North Rhine-Westphalia, an office he previously held between 2005 and 2010. 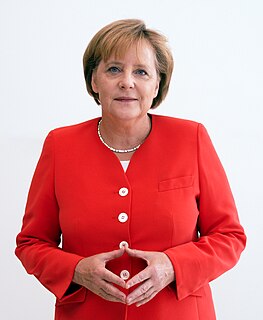 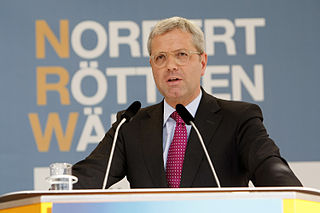 Norbert Röttgen is a German lawyer and politician of the Christian Democratic Union (CDU). He was Federal Minister for Environment, Nature Conservation and Nuclear Safety in the government of Chancellor Angela Merkel from 2009 to May 2012.

The history of Germany since 1990 spans the period following the Reunification of Germany, when West Germany and East Germany were reunited after being divided during the Cold War. Germany after 1990 is referred to by historians as the Berlin Republic. This time period is also determined by the ongoing process of the "inner reunification" of the formerly divided country.

Barbara Anne Hendricks is a German politician and member of the SPD party.

Michelle-Jasmin Müntefering is a German journalist and politician (SPD). She was a member of the party executive board in North Rhine-Westphalia from 2004 to 2014. She was elected to the German Bundestag and won her direct mandate for Herne – Bochum II in the 2013 and the 2017 federal election. In addition, since 14 March 2018 she has been serving as Minister of State at the Federal Foreign Office under minister Heiko Maas in the fourth government of Chancellor Angela Merkel.

Ute Vogt is a German lawyer and politician of the Social Democratic Party (SPD) who has been serving as a member of the Bundestag from 1994 until 2005 and since 2009.