A frazione (Italian pronunciation:  [fratˈtsjoːne] ; pl.frazioni [fratˈtsjoːni] ; also hameaux officially in French in the Aosta Valley) is the Italian name given in administrative law to a type of territorial subdivision of a comune , the Italian municipality; for other administrative divisions, see municipio , circoscrizione , quartiere . [1] It is cognate to the English word fraction, but in practice is roughly equivalent to "civil parishes" or "wards"[ citation needed ] in other countries.

Typically the term frazioni applies to the villages surrounding the principal town (the capoluogo ) of a comune . Subdivision of a comune is optional; some comuni have no frazioni, but others have several dozen. The comune usually has the same name of the capoluogo, but not always.

In practice, most frazioni are small villages or hamlets, occasionally just a clump of houses. Not every hamlet is classified as a frazione; those that are not are often referred to as località , for example, in the telephone book. In some cases, frazioni are more populous than the capoluogo of the comune. Due to unusual circumstances or to the depopulation of the capoluogo, the town hall and its administrative functions can move to one of the frazioni: the comune still retains the name of the capoluogo.

Historically, many frazioni came into being during the Fascist era, when a major effort was made to consolidate and rationalize the territorial subdivisions of the country. Sometimes, a frazione represents a former comune that was believed to be no longer viable.

Until 2000, the central government established the frazioni and defined their borders, except in the case of the five autonomous regions (see Regions of Italy), where this was controlled at the regional level. By the Legislative Decree 267/2000 to implement amendments to Title V of the Italian Constitution, the individual comuni now define the frazioni within their borders.

Under the former legislation, a frazione had the option of having a prosindaco (submayor), who was appointed by the mayor (il sindaco) of the comune, often on the recommendation of deliberative bodies such as the communal council (consiglio) or the giunta, or as a result of a petition by enough residents of the frazione involved; although there was no official provision for frazioni to group together with the appointment of a single prosindaco, this did happen quite often. Under current law, however, Article 54 of the d.lgs. 267/2000 provides that a mayor may delegate mayoral functions at the frazione level to a councillor of the comune.

In many comuni, in addition to their advisory function, the frazioni have their own clerks and recorders of deeds, but they do not maintain their own civil records.[ citation needed ]

Bassano del Grappa is a city and comune, in the Vicenza province, in the region of Veneto, in northern Italy. It bounds the communes of Cassola, Marostica, Solagna, Pove del Grappa, Romano d'Ezzelino, Campolongo sul Brenta, Conco, Rosà, Cartigliano and Nove. Some neighbourhoods of these communes have become in practice a part of the urban area of Bassano, so that the population of the whole conurbation totals around 70,000 people.

A terziere is a subdivision of several towns in Italy. The word derives from terzo (‘third’) and is thus used only for towns divided into three neighborhoods. Terzieri are most commonly met with in Umbria, as for example at Trevi, Spello, Narni and Città della Pieve; towns divided into terzieri in other regions include Lucca in Tuscany, Ancona and Macerata in the Marches. The medieval Lordship of Negroponte, in the island of Euboea, was also divided into three distinct rulerships, which were known as terzieri.

A quartiere is a territorial subdivision of certain Italian towns. The word derives from quarto (‘fourth’) and was thus properly used only for towns divided into four neighborhoods by the two main roads. It has been later used as a synonymous of neighbourhood, and an Italian town can be now subdivided into a greater number of quartieri. The Swiss town of Lugano is subdivided into quarters also.

A contrada is a subdivision of Italian city, now unofficial. Depending on the case, a contrada will be a località, a rione, a quartiere, a borgo, or even a suburb. The best-known contrade are the 17 contrade of Siena, since they form the teams in the palio di Siena.

A rione is a neighbourhood in several Italian cities. A rione is a territorial subdivision. The larger administrative subdivisions in Rome are the municipi, with the rioni being used only in the historic centre. The word derives from the Latin regiones, the 14 subdivisions of Rome imposed by Augustus. The term has been adopted as a synonym of quartiere in the Italian comuni.

Circoscrizione can refer to two different administrative units of Italy. One is an electoral district approximating to the English constituency but typically the size of a province or region, depending on the election. The other is a subdivision of city comuni roughly equivalent to the municipal arrondissements of Paris or the London boroughs. 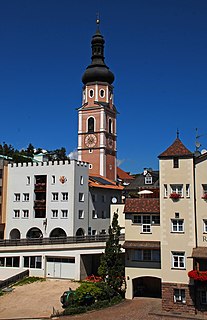 Kastelruth is a comune (municipality) in South Tyrol in northern Italy, about 20 kilometres (12 mi) northeast of the city of Bolzano.

Laives is a town and a comune (municipality) in South Tyrol in northern Italy, located about 8 kilometres (5 mi) south of the city of Bolzano. It is one of only five mainly Italian speaking municipalities in South Tyrol, and the fourth largest municipality in the province.

Airole is a comune (municipality) in the Province of Imperia in the Italian region of Liguria, located about 130 kilometres (81 mi) southwest of Genoa and about 40 kilometres (25 mi) west of Imperia, on the border with France. As of 31 December 2004, it had a population of 461 and an area of 14.8 square kilometres (5.7 sq mi).

Masciago Primo is a comune (municipality) in the Province of Varese in the Italian region Lombardy, located about 60 km northwest of Milan and about 12 km northwest of Varese. As of 31 December 2004, it had a population of 289 and an area of 1.9 km².

Casina is a comune (municipality) in the Province of Reggio Emilia in the Italian region Emilia-Romagna, located about 70 kilometres west of Bologna and about 25 km (16 mi) southwest of Reggio Emilia.

A località is an inhabited place in Italy that is not accorded a more significant distinction in administrative law such as a frazione, comune, municipio, circoscrizione, or quartiere. The word is cognate to English locality. The Italian National Institute of Statistics defines località abitata as an "area of more or less size, normally known by its own name, on which are situated either grouped or scattered houses."

Missaglia is a comune (municipality) in the Province of Lecco in the Italian Lombardy region, located at the centre of the area known as the Meratese. As of 31 December 2004, it had a population of 7,805.