Frederick John Westcott (26 March 1866 – 18 September 1941), best known by his stage name Fred Karno, was an English theatre impresario of the British music hall. [1] As a comedian of slapstick he is credited with popularizing the custard-pie-in-the-face gag. [2] During the 1890s, in order to circumvent stage censorship, Karno developed a form of sketch comedy without dialogue.

Cheeky authority-defying playlets such as Jail Mum (1896) in which prisoners play tricks on warders and Early Birds (1903), where a small man defeats a large ruffian in London's East End, can be seen as precursors of movie silent comedy. Film producer Hal Roach stated: "Fred Karno is not only a genius, he is the man who originated slapstick comedy. We in Hollywood owe much to him." [3]

Among the music hall comedians who worked for him were Charlie Chaplin and his understudy, Arthur Jefferson, who later adopted the name of Stan Laurel. These were part of what was known as "Fred Karno's Army", a phrase still occasionally used in the UK to refer to a chaotic group or organisation. The phrase was also adapted by British soldiers into a trench song in the First World War, as a parody of, or rather to the tune of, the hymn "The Church's One Foundation". [4] In the Second World War it was adapted as the Anthem of the Guinea Pig Club, the first line becoming "We are McIndoe's Army ...".

Karno was born in Exeter, Devon, England, in 1866. He worked as a cabinet maker with a workshop in Waterbeer Street. He married Edith and in 1896 his son, Fred Karno Jr. was born. [5] In 1904 he visited Tagg's Island on London's River Thames and in 1912 he bought the island and the existing hotel. He demolished the original hotel and hired architect Frank Matcham to build The Karsino. [6] With the advent of cinema, the music hall's popularity declined and as a result of this decline, Karno went bankrupt in 1925. [6]

On 24 May 1927 his wife Edith, from whom he had been separated since 1904, died in her sleep of diabetes. Three weeks later, Karno married his second wife, his long-time partner, Marie Moore. Karno went to the US in 1929, and was hired by the Hal Roach Studios as a writer-director, and was reunited with one of his former protégés, Stan Laurel. However, his stay at the studio was brief and unsuccessful as Hal Roach found out Karno's main abilities were as a producer, and he departed in February 1930. On his return to Britain, Karno helped to write and produce several short films and in 1936 returned to the theatre with a show called Real Life. [7]

Karno spent his last years in southwest England in the village of Lilliput, Dorset, as a part-owner of an off-licence bought with financial help from Charlie Chaplin, [8] and died there in 1941 from diabetes, aged 75. [1] [6]

His houseboat, the Astoria , on the River Thames at Hampton, Middlesex, is now used as a recording studio by Pink Floyd's David Gilmour. [9]

On 30 September 2012, the Music Hall Guild of Great Britain and America unveiled a commemorative blue plaque to Karno at his former studios at 38 Southwell Road, Camberwell, in south London. [10] 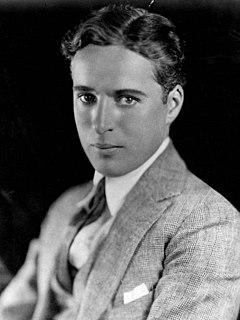 Sir Charles Spencer Chaplin was an English comic actor, filmmaker, and composer who rose to fame in the era of silent film. He became a worldwide icon through his screen persona, "The Tramp", and is considered one of the most important figures in the history of the film industry. His career spanned more than 75 years, from childhood in the Victorian era until a year before his death in 1977, and encompassed both adulation and controversy. 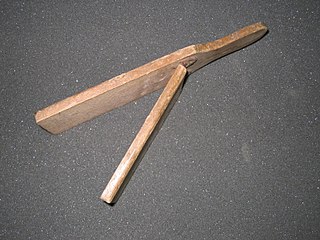 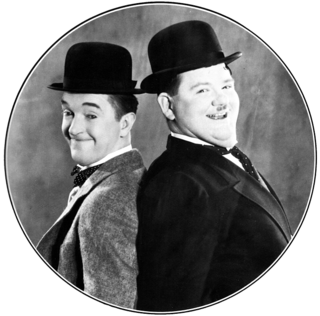 British comedy, in film, radio and television, is known for its consistently peculiar characters, plots and settings, and has produced some of the most famous and memorable comic actors and characters. 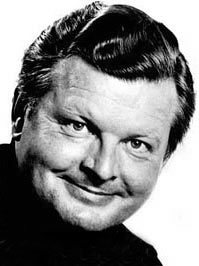 Alfred Hawthorne "Benny" Hill was an English comedian and actor, best remembered for his television programme The Benny Hill Show, an amalgam of slapstick, burlesque and double entendre in a format that included live comedy and filmed segments with Hill at the focus of almost every segment.

Chaplin is a 1992 British-American biographical comedy-drama film about the life of British comedian Charlie Chaplin. It was produced and directed by Richard Attenborough and stars Robert Downey Jr., Marisa Tomei, Dan Aykroyd, Penelope Ann Miller, and Kevin Kline. It also features Charlie Chaplin's own daughter, Geraldine Chaplin in the role of her grandmother, Hannah Chaplin. 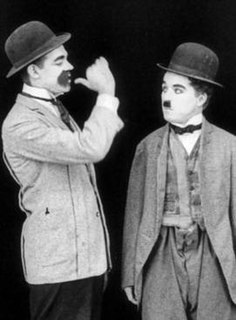 Albert Austin was an English actor, film star, director, and script writer, remembered for his work in Charlie Chaplin films. 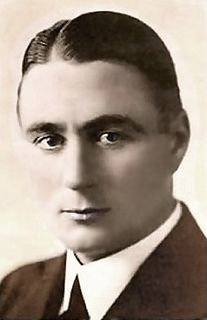 Sydney John Chaplin was an English actor. Chaplin was the elder half-brother of actor and director Charlie Chaplin, and served as his business manager in later life. 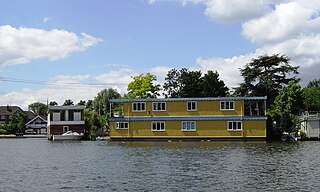 Tagg's Island, in the London Borough of Richmond upon Thames, is an island on the River Thames on the reach above Molesey Lock and just above Ash Island.

In a modern sense, comedy is a genre of fiction that refers to any discourse or work generally intended to be humorous or amusing by inducing laughter, especially in theatre, television, film, stand-up comedy, books and novels or any other medium of entertainment. The origins of the term are found in Ancient Greece. In the Athenian democracy, the public opinion of voters was influenced by the political satire performed by the comic poets at the theaters. The theatrical genre of Greek comedy can be described as a dramatic performance which pits two groups or societies against each other in an amusing agon or conflict. Northrop Frye depicted these two opposing sides as a "Society of Youth" and a "Society of the Old." A revised view characterizes the essential agon of comedy as a struggle between a relatively powerless youth and the societal conventions that pose obstacles to his hopes. In this struggle, the youth is understood to be constrained by his lack of social authority, and is left with little choice but to take recourse in ruses which engender very dramatic irony which provokes laughter. 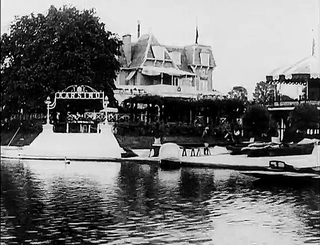 The Karsino was a hotel on Tagg's Island in the London Borough of Richmond upon Thames which stood from 1912 until 1972. 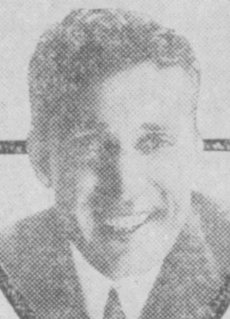 Billie Ritchie was a Scottish comedian who first gained transatlantic fame as a performer for British music hall producer Fred Karno—this, a full decade before Stan Laurel and Charlie Chaplin took a similar career path. Ritchie is best recalled today for the silent comedy shorts he made between 1914 and 1920 for director/producer Henry Lehrman's L-KO Kompany and Fox Film Sunshine Comedy unit.

Harry Weldon was an English comedian and music hall performer popular in the 1910s.