He achieved his greatest successes as a cinematographer, including winning two Academy Awards for Sons and Lovers (1960) and Glory (1989). [2] As a director, he was associated with the British production companies Amicus and Hammer in the 1960s and 1970s.

Born in Islington in London, England, Francis originally planned to become an engineer. At school, a piece he wrote about films of the future won him a scholarship to the North West London Polytechnic in Kentish Town. He left school at age 16, becoming an apprentice to photographer Louis Prothero. Francis stayed with Prothero for six months. In this time they photographed stills for a Stanley Lupino picture made at Associated Talking Pictures (later Ealing Studios). This led to his successively becoming a clapper boy, camera loader and focus puller. He began his career in films at British International Pictures, then moved to British and Dominions. His first film as a clapper boy was The Prisoner of Corbal (1936).

In 1939, Francis joined the Army, where he would spend the next seven years. Eventually, he was assigned as cameraman and director to the Army Kinematograph Service at Wembley Studios, where he worked on many training films. About this, Francis said, "Most of the time I was with various film units within the service, so I got quite a bit of experience in all sorts of jobs, including being a cameraman and editing and generally being a jack of all trades."

Following his return to civilian life, Francis spent the next 10 years working as a camera operator. Films he worked on during this period include The Elusive Pimpernel (1950), The Tales of Hoffmann (1951), Beat the Devil (1953), and Moby Dick (1956); he was a frequent collaborator with cinematographers Christopher Challis (nine films) and Oswald Morris (five films). His first feature with Morris was Golden Salamander (1950).

Francis was on the second unit of Moby Dick. He became a main unit director of photography on A Hill in Korea (1956), which was shot in Portugal. He subsequently worked on such prestige pictures as Room at the Top (1959), Saturday Night and Sunday Morning (1960), Sons and Lovers (1960), and The Innocents (1961), which he regarded as one of the best films he shot.

Following his Academy Award win for Sons and Lovers, Francis began his career as director of feature films. His first feature as director was Two and Two Make Six (1962). For the next 20-plus years, Francis worked continuously as a director of low-budget films, most of them in the genres of horror or psycho-thriller.

Beginning with Paranoiac (1963), Francis made numerous films for Hammer throughout the 1960s and 1970s. These films included thrillers like Nightmare (1964) and Hysteria (1965), as well as monster films such as The Evil of Frankenstein (1964) and Dracula Has Risen from the Grave (1968). On his apparent typecasting as a director of these types of film, Francis said "Horror films have liked me more than I have liked horror films".

Also in the mid-1960s, Francis began an association with Amicus Productions, another studio like Hammer which specialised in horror pictures. Most of the films Francis made for Amicus were anthologies such as Dr. Terror's House of Horrors (1965), Torture Garden (1968) and Tales from the Crypt (1972). He also did two films for the short-lived company Tyburn films. These were The Ghoul (1975) and Legend of the Werewolf (1975). As a director, Francis was more than competent, and his horror films possessed an undeniable visual flair. However, he regretted that he was seldom able to move beyond genre material as a director. Francis directed the little-seen Son of Dracula (1974), starring Harry Nilsson in the title role and Ringo Starr as Merlin the Magician. Of the films Francis directed, one of his favorites was Mumsy, Nanny, Sonny, and Girly (1970). Mumsy... was a black comedy about an isolated, upper-class family whose relationships and behaviors came equipped with deadly consequences. The film was not very well received by mainstream critics but has gone on to become a minor cult favorite among fans. In 1985, Francis directed The Doctor and the Devils , based on the crimes of Burke and Hare.

Francis's last film as director was 1987's Dark Tower (no relation to the 2004 book of the same name by Stephen King). Francis thought it was a bad picture owing to poor special effects and had his name taken off it. His name was substituted with the name Ken Barnett. Francis is featured in the book Conversations with Cinematographers (2012) by David A Ellis and published by American publisher Scarecrow Press.

With The Elephant Man (1980), directed by David Lynch, Francis gained a new-found industry and critical respect as a cinematographer. During the 1980s, he worked on films such as The Executioner's Song (1982), Dune (1984) and Glory (1989), which earned him his second Academy Award. Francis provided the cinematography for the critical favorite The Man in the Moon as well as Martin Scorsese's remake of Cape Fear (both 1991). His final film as cinematographer was David Lynch's The Straight Story (1999), which was shot on location in Iowa in 23 days. One of his favorite camera operators was Gordon Hayman. He made several films with him including the Cape Fear remake and Glory, but Hayman was left off the credits for the later film by mistake.

Francis died at age 89 as the result of the lingering effects of a stroke.

Hammer Film Productions Ltd. is a British film production company based in London. Founded in 1934, the company is best known for a series of Gothic horror and fantasy films made from the mid-1950s until the 1970s. Many of these involve classic horror characters such as Baron Victor Frankenstein, Count Dracula, and the Mummy, which Hammer reintroduced to audiences by filming them in vivid colour for the first time. Hammer also produced science fiction, thrillers, film noir and comedies, as well as, in later years, television series. During its most successful years, Hammer dominated the horror film market, enjoying worldwide distribution and considerable financial success. This success was, in part, due to its distribution partnerships with American companies United Artists, Warner Bros., Universal Pictures, Columbia Pictures, Paramount Pictures, 20th Century Fox, Metro-Goldwyn-Mayer, American International Pictures and Seven Arts Productions.

Roy Ward Baker was an English film director. His best known film is A Night to Remember (1958) which won a Golden Globe for Best English-Language Foreign Film in 1959. His later career included many horror films and television shows. 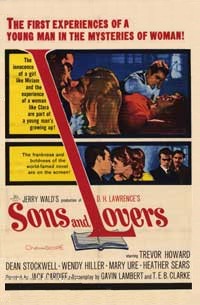 Sons and Lovers is a 1960 British black and white film adaptation of the D. H. Lawrence 1913 semi-autobiographic novel of the same name. It was adapted by T. E. B. Clarke and Gavin Lambert, directed by Jack Cardiff, and stars Trevor Howard, Dean Stockwell, Wendy Hiller, Mary Ure, William Lucas and Donald Pleasence. Location shooting took place near Nottingham in the East Midlands of England, very close to where Lawrence himself grew up.

Craze is a 1974 horror film directed by Freddie Francis. It stars Jack Palance as a psychotic antiques dealer who sacrifices women to the statue of an African god.

The Doctor and The Devils is a 1985 British gothic horror film directed by Freddie Francis, and produced by Mel Brooks, through his production company Brooksfilms. It is based upon the true story of Burke and Hare, who in 1828 Edinburgh, Scotland, murdered at least 16 people and sold their bodies for anatomical dissection. 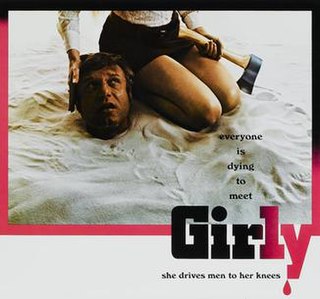 Mumsy, Nanny, Sonny, and Girly, released as Girly outside the United Kingdom, is a 1970 British horror-comedy film. The film originated as a dream project for renowned cinematographer-turned-director Freddie Francis, who wanted the opportunity to direct a film over which he had complete creative control, instead of working on assignment from a studio. Francis teamed with writer Brian Comport to build the movie around Oakley Court, which Francis had used for exterior shots in previous films. The script was based on a two-act play by Maisie Mosco entitled Happy Family, which was later adapted into a novella by screenwriter Brian Comport as "Mumsy, Nanny, Sonny, and Girly". Though the film fared poorly in British cinemas, it enjoyed a brief but successful run in North America before going on to achieve status as a cult film.

What Became of Jack and Jill? is a 1972 British horror film directed by Bill Bain and starring Mona Washbourne, Paul Nicholas, and Vanessa Howard. It was part of an abandoned attempt by Amicus Pictures to compete with Hammer Studios by breaking into the grindhouse market. Studio executives were ultimately too disturbed by the final product to release it under the Amicus name, and they sold the film to 20th Century Fox.

Frankenstein is the title of several horror-adventure films loosely based on the 1818 novel Frankenstein; or, The Modern Prometheus by Mary Shelley, centered on Baron Victor Frankenstein, who experiments in creating a creature beyond human.