Last updated May 08, 2020
For persons of a similar name, see Frederick Schwarz (disambiguation).

Thomas Wilmer Dewing was an American painter working at the turn of the 20th century. Schooled in Paris, Dewing was noted for his figure paintings of aristocratic women. He was a founding member of the Ten American Painters and taught at the Art Students League of New York. The Freer Gallery of Art at the Smithsonian Institution has a collection of his works. He was the husband of fellow artist Maria Oakey Dewing.

John Munro Longyear, Sr. was an American businessman and noted developer of timber and mineral lands in the Upper Peninsula of Michigan who became the central figure behind the Arctic Coal Company, which surveyed and mined coalfields on Spitsbergen, now Svalbard, from 1905 to 1916. This company developed a settlement on Spitsbergen able to accommodate up to around 500 people which became known as Longyear City, now Longyearbyen, adjacent Advent Bay.

Winford Lee Lewis was a US soldier and chemist best known for his rediscovery of the chemical warfare agent lewisite in 1917. He was born in Gridley, California and died in his home in Evanston, Illinois in 1943 following a fall.

Herman or Hermann Ziegner was a German-American soldier who served in the U.S. Army during the Indian Wars and the Spanish–American War. In 1891, he was one of twenty men to receive the Medal of Honor at the Battle of Wounded Knee., now called the Wounded Knee Massacre. He was also a non-commissioned officer of 71st New York Volunteer Infantry Regiment, taking part in the Santiago campaign and the charge up San Juan Hill, and was one of many regimental members who died from malnourishment and malaria prior to and shortly after returning to the United States.

Bernhard Jetter was a German-born soldier in the U.S. Army who served with the 7th U.S. Cavalry during the Indian Wars. He was one of twenty men who received the Medal of Honor for gallantry against the Dakota at the Battle of Wounded Knee, but now called the Wounded Knee Massacre, in South Dakota on December 29, 1890. 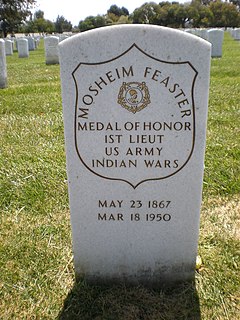 First Sergeant Mosheim Feaster was an American soldier in the U.S. Army who served with the 7th U.S. Cavalry during the Indian Wars. He was one of twenty men awarded the Medal of Honor for extraordinary gallantry at the Battle of Wounded Knee, but now called the Wounded Knee Massacre, on December 29, 1890. He later served in the Spanish–American War.

Frederick Ernest Toy was a soldier in the U.S. Army during the Indian and Spanish–American Wars; During his enlisted service, he was assigned to the 7th Cavalry Regiment until promoted to ordnance sergeant and served at a variety of posts. He received the Medal of Honor for bravery at the Battle of Wounded Knee, but now called the Wounded Knee Massacre, against the Dakota Indians on December 29, 1890. Toy retired from the Army in 1910. He was recalled and commissioned as a captain during World War I. He worked as an employment manager and as a railroad police officer.

Ben F. "Cyclone" Reeves was an American baseball player who played for the All Nations as a catcher, and also wrestled in a match before or after many of the baseball games as they traveled a large part of the United States, mostly in the Upper Midwest. Reeves appears to have known manager J. L. Wilkinson long before the All Nations team was formed, when they both toured with the Des Moines Hopkins Bros. team, the Bloomer Girls.

John Loebs was a member of the Wisconsin State Assembly.

Dora Zaslavsky Koch was an American pianist who was one of the first graduates and later a teacher of the Manhattan School of Music. She died on September 9, 1987.

Charles Eduard McIntosh was a member of the Wisconsin State Assembly and a Union Army soldier.

Mary Pickering Nichols, was an American translator of German literature, active in the last quarter of the 19th century. She was the fifth of the six children of Benjamin Ropes Nichols and her namesake Mary Pickering. She is credited with making the first complete English translation of the medieval German epic poem Gudrun in 1889.

Janet Quentin Plowe was a biologist credited for helping to discover the cell membrane. In 1931 she demonstrated that the cell membrane is physical, instead of an interface between two different liquids. Janet Plowe was born in 1905 in California.

Corliss Palmer was an American silent film actress and model. She first came to public attention after winning Motion Picture Magazine's Fame and Fortune Contest in 1920, upon which she was deemed the "most beautiful girl in America." She would go on to appear in a total of sixteen films between 1922 and 1931.

Nathaniel ("Nate") Ridgway White was an award-winning journalist known for his business and financial reporting at The Christian Science Monitor. He received the second and third Gerald Loeb Awards for Newspapers, the most prestigious award for business journalism.

Fred, Frederic, Frederick, Friedrich, or FritzSchwarz, Schwartz, Shwarz, or Shwartz could refer to:

Captain Ralph Erksine Peasley "Captain Matt" is a sea captain from the Pacific Northwest who became famous due to a popular series of short stories by Peter Bernard Kyne called Cappy Ricks or the Subjugation of Matt Peasley.