Matheson was the son of a Scottish clergyman and was educated at Trinity College, Glenalmond, in Scotland, before obtaining a scholarship to study at Keble College, Oxford. He trained for ordination at Cuddesdon College, near Oxford. He was a lecturer at Keble College from 1908 to 1909, becoming one of the tutors in 1909 – at this time, unlike the other colleges of the University of Oxford, Keble did not have fellows, and its senior academic staff were known as tutors. He served as dean of the college from 1914. He left Keble in 1921 to be a canon of Carlisle Cathedral, although he retained a connection with Keble as he was appointed a member of the council in 1921, and served until his death. In 1923, he took up the post of warden of Trinity College, Glenalmond; he was also a canon of St Ninian's Cathedral, Perth, between 1924 and 1938. In 1938, he returned to Carlisle as dean, a position he held until his death on 1 July 1942. [1] 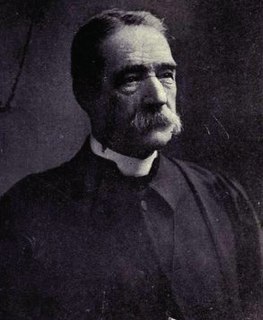 Frederick Cyril Nugent Hicks (1872–1942) was an Anglican bishop and author who served as Bishop of Gibraltar from 1927 to 1933, during which time he was appointed as Sub-Prelate of the Order of St John of Jerusalem. He was Bishop of Lincoln from 1933 to 1942.

Ernest Denny Logie Danson was an Anglican bishop in the first half of the 20th century.

John Reginald Homer Weaver was a British historian, academic and architectural photographer. He was president of Trinity College, Oxford, from 1938 to 1954.

Frederick Brodie MacNutt was an Anglican priest and author in the first half of the 20th century.

John Hannah was a Church of England clergyman and schoolmaster.

Charles Euston Nurse was Archdeacon of Carlisle and a Residentiary Canon at Carlisle Cathedral from 1958 until 1970 and 1973 respectively.

Percy Matheson Bayne, was the first Archdeacon of Southend, serving from 1922 until 1938.