Haddon was born at Croydon, England, the son of Richard Haddon, a schoolmaster and landscape artist, and his wife Mary Caroline, née Wykes. Haddon was educated at private schools and in 1859 became assistant-secretary of the Statistical Society of London and of the Institute of Actuaries. Haddon resigned these positions in 1863 to accept an engagement with The Argus , Melbourne.

Haddon arrived in Melbourne in December 1863 was soon made sub-editor. When the new weekly The Australasian was established in 1864, Haddon became its first editor, and in January 1867 was made editor of The Argus at 27 years of age. It was a period of great developments in Victoria, and under Haddon's editorship the Argus, while distinctly conservative served a most useful purpose in advocating the claims of the primary producers, and endeavouring to keep protective duties within reasonable bounds. It fought with success for non-political control of government departments and purity of administration, with the result that Victoria set a high standard among the colonies in these matters. Richard Twopeny, described The Argus as 'the best daily paper published out of England'. When Graham Berry and Charles Henry Pearson went as an embassy to the Parliament of the United Kingdom in 1879, Haddon, who was visiting England in that year, was asked by some of their opponents to set the facts of the controversy before the "government, parliament and press of Great Britain". He compiled a pamphlet which was printed in London, The Constitutional Difficulty in Victoria. This was sent to all the members of the British parliament and to the press. Haddon also personally interviewed leading statesmen and editors, and probably was a strong influence on the non-success of the mission. There was not really, however, a strong case for British interference.

On his return from Britain, Haddon went back to his editorial chair. He was of a dispassionate nature and set a high standard in the discussion of public matters. The Argus fought well for federation, which had practically become certain when Haddon in 1898 resigned his editorship to take up the important task of representing the Edward Wilson Estate on the management of the Argus and Australasian. Haddon was Melbourne correspondent for The Times in 1895–1903, and was president of the Victorian Poultry and Kennel Club. Haddon died at Melbourne on 7 March 1906. Haddon was married twice: firstly to Annie Jane King (died 1875) and secondly to Alice Annie Good on 31 January 1883 who survived him with a daughter by the first marriage.

Haddon appreciated good writing and was always ready to encourage it. As an editor, he refused to be affected by popular excitement, and though his paper was on occasions criticized for not taking a stronger stand, he probably did all that could be done when it is remembered how strong the remarkable personality of David Syme had made The Age, which for a great part of the period was issued at a lower price than the Argus, and had a much larger circulation.

William Lamb, 2nd Viscount Melbourne,, in some sources called Henry William Lamb, was a British Whig statesman who served as Home Secretary (1830–1834) and Prime Minister. He is best known for being prime minister in Queen Victoria's early years and coaching her in the ways of politics, acting almost as her private secretary. Historians have concluded that Melbourne does not rank highly as a Prime Minister, for there were no great foreign wars or domestic issues to handle, he lacked major achievements, he enunciated no grand principles, and he was involved in several political scandals in the early years of Victoria's reign. 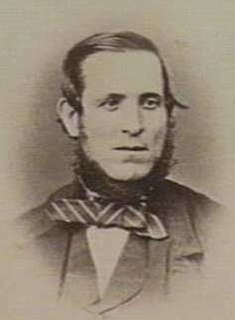 Sir Graham Berry,, Australian colonial politician, was the 11th Premier of Victoria. He was one of the most radical and colourful figures in the politics of colonial Victoria, and made the most determined efforts to break the power of the Victorian Legislative Council, the stronghold of the landowning class. 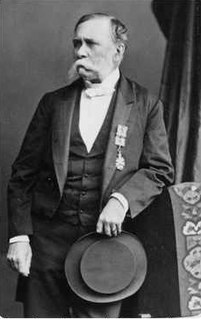 Sir John Blackler Colton, was an Australian politician, Premier of South Australia and philanthropist. His middle name, Blackler, was used only rarely, as on the birth certificate of his first son.

Butler Cole Aspinall was a British-born journalist, barrister and Queen's Counsel who migrated with his young wife to Melbourne, Australia, at first as an editor and writer for The Argus. He soon took up his lucrative legal practice as a defence advocate and later as a politician in the state of Victoria.

Captain Sir Charles MacMahon was an Australian politician who twice served as Speaker of the Victorian Legislative Assembly and as Chief Commissioner of Victoria Police. MacMahon was born County Tyrone, Ireland, to a wealthy Irish family and served in the British army. He obtained a veterinary diploma in 1852, and soon left for Australia to join the gold rush. He arrived in Melbourne on 18 November 1852.

William Thomas Ahern was an Australian rules footballer who played with St Kilda in the Victorian Football League (VFL).

This is a list of members of the Victorian Legislative Assembly, from the elections of 21 January; 7, 20 February 1868 to the elections of 14 February; 3, 16 March 1871. Victoria was a British self-governing colony in Australia at the time.