Frederick William III (German : Friedrich Wilhelm III.; 3 August 1770 – 7 June 1840) was king of Prussia from 1797 to 1840. He ruled Prussia during the difficult times of the Napoleonic Wars and the end of the Holy Roman Empire. Steering a careful course between France and her enemies, after a major military defeat in 1806, he eventually and reluctantly joined the coalition against Napoleon in the Befreiungskriege . Following Napoleon's defeat, he was King of Prussia during the Congress of Vienna, which assembled to settle the political questions arising from the new, post-Napoleonic order in Europe. He was determined to unify the Protestant churches, to homogenize their liturgy, their organization, and even their architecture. The long-term goal was to have fully centralized royal control of all the Protestant churches in the Prussian Union of Churches.

Frederick William was born in Potsdam in 1770 as the son of Frederick William II of Prussia and Frederica Louisa of Hesse-Darmstadt. He was considered to be a shy and reserved boy, which became noticeable in his particularly reticent conversations distinguished by the lack of personal pronouns. This manner of speech subsequently came to be considered entirely appropriate for military officers. [1] He was neglected by his father during his childhood and suffered from an inferiority complex his entire life. [2]

As a child, Frederick William's father (under the influence of his mistress, [3] Wilhelmine Enke, Countess of Lichtenau) had him handed over to tutors, as was quite normal for the period. He spent part of the time living at Paretz, the estate of the old soldier Count Hans von Blumenthal who was the governor of his brother Prince Heinrich. They thus grew up partly with the Count's son, who accompanied them on their Grand Tour in the 1780s. Frederick William was happy at Paretz, and for this reason in 1795 he bought it from his boyhood friend and turned it into an important royal country retreat. He was a melancholy boy, but he grew up pious and honest. His tutors included the dramatist Johann Engel.

As a soldier, he received the usual training of a Prussian prince, obtained his lieutenancy in 1784, became a lieutenant colonel in 1786, a colonel in 1790, and took part in the campaigns against France of 1792–1794. [3] On 24 December 1793, Frederick William married Louise of Mecklenburg-Strelitz, who bore him ten children. In the Kronprinzenpalais (Crown Prince's Palace) in Berlin, Frederick William lived a civil life with a problem-free marriage, which did not change even when he became King of Prussia in 1797. His wife Louise was particularly loved by the Prussian people, which boosted the popularity of the whole House of Hohenzollern, including the King himself. [4]

Frederick William succeeded to the throne on 16 November 1797. He also became, in personal union, the sovereign prince of the Principality of Neuchâtel (1797–1806 and again 1813–1840). At once, the new King showed that he was earnest of his good intentions by cutting down the expenses of the royal establishment, dismissing his father's ministers, and reforming the most oppressive abuses of the late reign. [3] He had the Hohenzollern determination to retain personal power but not the Hohenzollern genius for using it. [3] Too distrustful to delegate responsibility to his ministers, [3] he greatly reduced the effectiveness of his reign since he was forced to assume the roles he did not delegate. This is a main factor of his inconsistent rule.

Disgusted with the moral debauchery of his father's court (in both political intrigues and sexual affairs), Frederick William's first, and most successful early endeavor was to restore the moral legitimacy to his dynasty. The eagerness to restore dignity to his family went so far that it nearly caused sculptor Johann Gottfried Schadow to cancel the expensive and lavish Prinzessinnengruppe project, which was commissioned by the previous monarch Frederick William II. He was quoted as saying the following, which demonstrated his sense of duty and peculiar manner of speech:

Every civil servant has a dual obligation: to the sovereign and to the country. It can occur that the two are not compatible; then, the duty to the country is higher.

At first Frederick William and his advisors attempted to pursue a policy of neutrality in the Napoleonic Wars. Although they succeeded in keeping out of the Third Coalition in 1805, eventually Frederick William was swayed by the attitude of the queen, who led Prussia's pro-war party, and entered into war in October 1806. On 14 October 1806, at the Battle of Jena-Auerstädt, the French effectively decimated the effectiveness and functionality of the Prussian army led by Frederick William, and the Prussian army collapsed entirely soon after. Napoleon occupied Berlin in late October. The royal family fled to Memel, East Prussia, where they fell on the mercy of Emperor Alexander I of Russia.

Alexander, too, suffered defeat at the hands of the French, and at Tilsit on the Niemen France made peace with Russia and Prussia. Napoleon dealt with Prussia very harshly, despite the pregnant Queen's personal interview with the French emperor which was believed would soften the blow of defeat. Instead, Napoleon took much less mercy on the Prussians than what was expected. Prussia lost many of its Polish territories, as well as all territory west of the Elbe, and had to finance a large indemnity and to pay for French troops to occupy key strong points within the Kingdom.

Although the ineffectual King himself seemed resigned to Prussia's fate, various reforming ministers, such as Baron vom Stein, Prince von Hardenberg, Scharnhorst, and Count Gneisenau, set about reforming Prussia's administration and military, with the encouragement of Queen Luise (who died, greatly mourned, in 1810).

In 1813, following Napoleon's defeat in Russia, Frederick William turned against France and signed an alliance with Russia at Kalisz, although he had to flee Berlin, still under French occupation. Prussian troops played a key part in the victories of the allies in 1813 and 1814, and the King himself travelled with the main army of Prince Schwarzenberg, along with Alexander of Russia and Francis of Austria.

At the Congress of Vienna, Frederick William's ministers succeeded in securing important territorial increases for Prussia, although they failed to obtain the annexation of all of Saxony, as they had wished.[ citation needed ] Following the war, Frederick William turned towards political reaction, abandoning the promises he had made in 1813 to provide Prussia with a constitution. [5]

Frederick William was determined to unify the Protestant churches, to homogenize their liturgy, their organization and even their architecture. The long-term goal was to have fully centralized royal control of all the Protestant churches in the Prussian Union of churches. In a series of proclamations over several years the Church of the Prussian Union was formed, bringing together the majority group of Lutherans, and the minority group of Reformed Protestants. The main effect was that the government of Prussia had full control over church affairs, with the king himself recognized as the leading bishop. [6]

In 1838 the king distributed large parts of his farmland at Erdmannsdorf Estate to 422 protestant refugees from the Austrian Zillertal who built Tyrolian style farmhouses in the Silesian village.[ citation needed ] 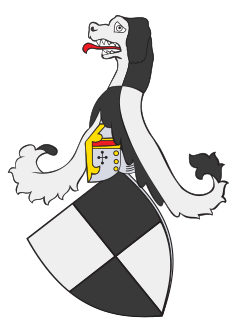 The House of Hohenzollern is a German royal dynasty whose members were variously princes, electors, kings and emperors of Hohenzollern, Brandenburg, Prussia, the German Empire, and Romania. The family arose in the area around the town of Hechingen in Swabia during the 11th century and took their name from Hohenzollern Castle. The first ancestors of the Hohenzollerns were mentioned in 1061.

Frederick William II was King of Prussia from 1786 until his death. He was in personal union the Prince-elector of Brandenburg and sovereign prince of the Canton of Neuchâtel. Pleasure-loving and indolent, he is seen as the antithesis to his predecessor, Frederick II. Under his reign, Prussia was weakened internally and externally, and he failed to deal adequately with the challenges to the existing order posed by the French Revolution. His religious policies were directed against the Enlightenment and aimed at restoring a traditional Protestantism. However, he was a patron of the arts and responsible for the construction of some notable buildings, among them the Brandenburg Gate in Berlin. 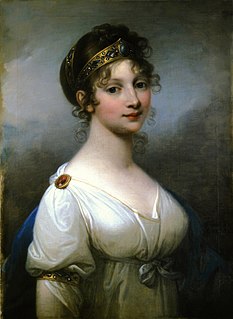 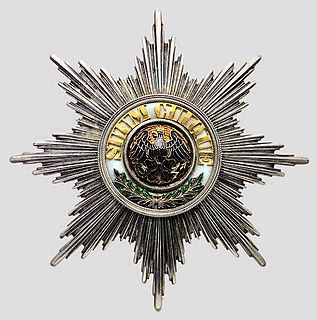 Elisabeth Ludovika of Bavaria was a Princess of Bavaria and later Queen consort of Prussia.

Prince Augustus Ferdinand of Prussia was a Prussian prince and general, as well as Herrenmeister of the Bailiwick of Brandenburg of the Order of Saint John. He belonged to the House of Hohenzollern, and was the youngest son of Frederick William I of Prussia by his wife, Queen Sophia Dorothea. 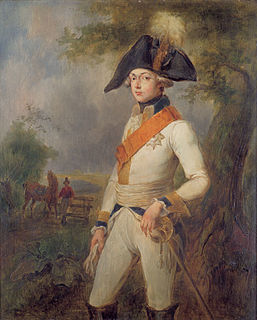 Karl Friedrich von dem Knesebeck was a Prussian field marshal and military adviser in the Napoleonic Wars, notable for designing the campaign plan of the Battle of Leipzig and the subsequent invasion of France. 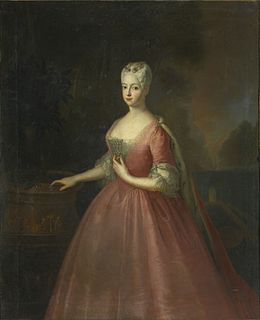 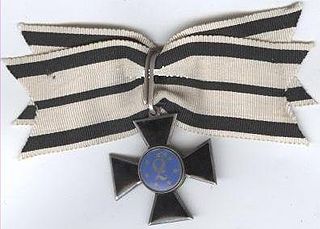 The Order of Louise was founded on 3 August 1814 by Frederick William III of Prussia to honor his late wife, the much beloved Queen Louise. This order was chivalric in nature, but was intended strictly for women whose service to Prussia was worthy of such high national recognition. Its dame companion members were limited to 100 in number, and were intended to be drawn from all classes. 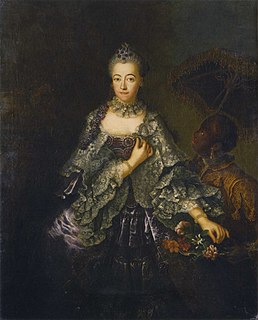 Countess Auguste von Harrach, was the second spouse of King Frederick William III of Prussia. At the time of their marriage Harrach family was still not recognized as equal, although, later in 1841, they were officially recognized as a mediatized family, with the style of Illustrious Highness which allowed them having equal status for marriage purposes to those reigning and royal families. Due to that, in 1824 when the marriage occurred, it was treated as morganatic, so she was not named Queen, but was given the titles Princess von Liegnitz and Countess von Hohenzollern. Frederick reportedly stated, that he did not wish to have another queen after his first one. 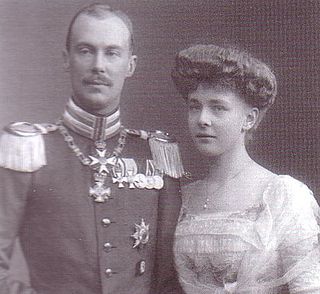 Philip William, Prince in Prussia was a Prussian Prince, was the first owner of the Prussian secundogeniture of Brandenburg-Schwedt and was governor of Magdeburg from 1692 to 1711.

Countess Maria Louise Albertine of Leiningen-Dagsburg-Falkenburg ; also known as Princess George, was heiress to the barony of Broich and by marriage Princess of Hesse-Darmstadt. She was the grandmother and educator of Princess Louise of Mecklenburg-Strelitz, who later became Queen consort of Prussia. 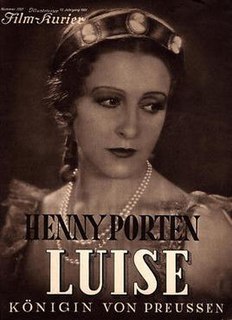