The Chief of Staff of the French Air Force (CEMAA) is a direct subordinate of the Chief of the Defence Staff (CEMA).

President Emmanuel Macron has stated the intent to rename the French Air Force into the Air and Space Force, in recognition of the increasing importance of the space domain. [7]

France was one of the first states to start building aircraft. At the beginning of World War I, France had a total of 148 planes (eight from French Naval Aviation (aéronautique navale)) and 15 airships. By the time of the armistice of 11 November 1918, France had 3,608 planes in service. [9] 5,500 pilots and observers were killed out of the 17,300 engaged in the conflict, amounting to 31% of endured losses. [10] A 1919 newspaper article reported that the French Air Force had a 61% percent war loss. [11]

Military aeronautics was established as a "special arm" by the law of 8 December 1922. [12] However, it remained under the auspices of the French Army. It was not until 2 July 1934, that the "special arm" became an independent service and was totally independent.

The initial air arm was the cradle of French military parachuting, responsible for the first formation of the Air Infantry Groups (lang-fr|Groupements de l'Infanterie de l'Air) in the 1930s, out of which the Air Parachute Commandos (French : commandos parachutistes de l'air) descended.

The French Air Force maintained a continuous presence across the French colonial empire, particularly from the 1920s to 1943.

The Vichy French Air Force had a significant presence in the French Levant.

From 1964 until 1971 the French Air Force had the unique responsibility for the French nuclear arm via Dassault Mirage IV or ballistic missiles of Air Base 200 Apt-Saint-Christol on the Plateau d'Albion.

Accordingly, from 1962, the French political leadership reprioritized its military emphasis on nuclear deterrence, implementing a complete reorganisation of the Air Force, with the creation of four air regions and seven major specialised commands, among which were the Strategic Air Forces Command, COTAM, the Air Command of Aerial Defense Forces (French : Commandement Air des Forces de Défense Aérienne , CAFDA), and the Force aérienne tactique (FATac). [13] In 1964 the Second Tactical Air Command was created at Nancy to take command of air units stationed in France but not assigned to NATO. The Military Air Transport Command had previously been formed in February 1962 from the Groupement d'Unités Aériennes Spécialisées. Also created in 1964 was the Escadron des Fusiliers Commandos de l'Air (EFCA), seemingly grouping all FCA units. The Dassault Mirage IV, the principal French strategic bomber, was designed to strike Soviet positions as part of the French nuclear triad.

CFAS had two squadrons of S2 and S-3 IRBMs at the Plateau d'Albion, six squadrons of Mirage IVAs (at Mont de Marsan, Cazaux, Orange, Istres, St Dizier, and EB 3/94 at Luxeuil), and three squadrons of C-135F, as well as a training/reconnaissance unit, CIFAS 328, at Bordeaux. The tactical air command included wings EC 3, EC 4, EC 7, EC 11, EC 13, and ER 33, with a total of 19 squadrons of Mirage III, Jaguars, two squadrons flying the Mirage 5F (EC 2/13 and EC 3/13, both at Colmar), and a squadron flying the Mirage F.1CR. CoTAM counted 28 squadrons, of which ten were fixed-wing transport squadrons, and the remainder helicopter and liaison squadrons, at least five of which were overseas. CAFDA numbered 14 squadrons mostly flying the Mirage F.1C. Two other commands had flying units, the Air Force Training Command, and the Air Force Transmissions Command, with four squadrons and three trials units.

Dassault Aviation led the way mainly with delta-wing designs, which formed the basis for the Dassault Mirage III series of fighter jets. The Mirage demonstrated its abilities in the Six-Day War, Yom Kippur War, the Falklands War, and the Gulf War, becoming one of the most popular jet fighters of its day, selling very widely.

In 1994 the Commandment of the Fusiliers Commandos de l'Air was reestablished under a different form.

The French Air Force is expanding and replacing its aircraft inventory. The Air Force is awaiting the Airbus A400M military transport aircraft, which is in development. As of November 2016, 11 A400M aircraft had been delivered to ET00.061 at Orleans-Bricy, and integration of the new Dassault Rafale multi-role jet fighter was underway, whose first squadron of 20 aircraft became operational in 2006 at Saint-Dizier.

In 2009 France rejoined the NATO Military Command Structure, having been absent since 1966. [15] France was a leading nation, alongside the United States, Great Britain and Italy in implementing the UN sponsored no-fly zone in Libya (NATO Operation Unified Protector), deploying 20 fighter aircraft to Benghazi in defense of rebel held positions and the civilian population. [16]

The last remaining squadron of Dassault Mirage F1s were retired in July 2014 and replaced by the Dassault Rafale.

On 13 July 2019, President Emmanuel Macron announced the creation of a space command within the French Air Force by September 2019, and the transformation of the French Air Force into the French Air and Space Force. [17] According to Defense Minister Florence Parly, France reserves the right to arm French satellites with lasers for defensive purposes. [18]

Under the authority of the Chief of Staff of the French Air Force (CEMAA) in Paris, the Air Force includes:

Air Force headquarters is co-located, alongside the Chief of the Defence Staff's offices (EMA) as well with Army and Navy headquarters at the Ballard. It numbers 150 aviators. The new site succeeds the former Paris Air Base (BA 117), the air staff headquarters buildings, dissolved on 25 June 2015.

These last two brigades belonged until 2013 to the Air Force Support Command (CSFA), which maintained the arms systems, equipment, information and communication systems (SIC) as well as infrastructure; the CSFA supported the human element, the military logistics (supply and transport), wherever forces of the French Air Force operated or trained; these two brigades are now subordinated to the CFA.

From 2008 to 2010 the French Air Force underwent the "Air 2010" streamlining process. The main targets of this project were to simplify the command structure, to regroup all military and civil air force functions and to rationalise and optimise all air force units. Five major commands, were formed, instead of the former 13, and several commands and units were disbanded. [24]

Commanded by a Lieutenant-colonel or Colonel, the Escadre is a formation that assembles various units and personnel dedicated to the same mission. The designation of " Escadre " was replaced with that of regiment in 1932 and was designated until 1994, a unit grouping :

Escadres (wings) were dissolved from 1993 as part of the Armées 2000 reorganisation, were reestablished in 2014. [26] The problems caused by having the aircraft maintenance units not responsible to the flying squadrons they supported eventually forced the change.

Four Escadres were reformed in the first phase: [26]

In the second phase, the French Air Force announced in August 2015 the creation of six additional wings: [26]

The French Air Force announced in August 2015 that unit numbering, moves of affected aircraft, and the transfer of historic material (flags, traditions and names) would be completed in 2016. [26]

Commanded by a lieutenant-colonel, the Escadron is the basic operational unit. This term replaced that of Group as of 1949 with the aim to standardize usage with the allies of NATO who were using the term 'squadron'. However, the term Group did not entirely disappear: the term was retained for the Aerial Group 56 Mix Vaucluse, specialized in Special Operations or Group – Groupe de Ravitaillement en Vol 02.091 Bretagne (French : Groupe de Ravitaillement en Vol 02.091 Bretagne ) which is still carrying the same designation since 2004.[ citation needed ]

The Escadrille (flight) has both an administrative and operational function, even of the essential operational control is done at the level of the Esacdron. A pilot is assigned to the Escadrille, however the equipment and material devices, on the other hand, are assigned to the Escadron. Since the putting into effect of the ESTA (Aeronautic Technical Support Escadrons), material devices and the mechanics are assigned directly to the base then put at disposition of the based Escadrons.[ citation needed ]

Protection Squadrons protect airbases inside and outside the national territory, and in exterior operations as well.

The CPAs carry out common missions, as well as specialized tasks; including intervention and reinforcement of protection at the profit of sensible points " air " inside and outside the national territory.

Flying activity in France is carried out by a network of bases, platforms and French air defence radar systems. It is supported by bases, which are supervised and maintained by staff, centres of operations, warehouses, workshops, and schools. Both in France and abroad, bases have similar infrastructure to provide standardised support.

As swift as the French Air Force operates, the closure of aerial bases is more constant and immediate, having known a strong acceleration since the 1950s. An airbase commander has authority over all units stationed on his base. Depending on the units tasks this means that he is responsible for approximately 600 to 2500 personnel.

On average, a base, made up of about 1500 personnel (nearly 3500 people including family), provides a yearly economic boost to its area of about 60 million euros. Consequently, determining the sites for air bases constitutes a major part of regional planning. [28]

Aircraft of the French Air Force include: [31]

Officers, within their recruitment and future specialty, are trained at:

Officers of the French Air Force are spread in three corps:

Air Base 115 Orange-Caritat is a French Air Force base equipped with one runway and named after Capitaine de Seyne. It is located 5 kilometres (3 mi) east of Orange, a commune in the Vaucluse department of the Provence-Alpes-Côte d'Azur region in France.

Patrick de Rousiers, is a retired French Air Force general. His last position was serving as the Chairman of the European Union Military Committee, assuming that position from 6 November 2012 to 5 November 2015.

The Strategic Air Forces (FAS) is a command of the French Air Force. It was created on January 14, 1964, and directs France's nuclear bombardment force.

Général d'armée aérienne André Lanata is a French fighter pilot and served as Chief of Staff of the French Air Force CEMAA from 21 September 2015. He was succeeded on 31 August 2018 by Philippe Lavigne.

Escadron de Chasse or Fighter Squadron2/30 Normandie-Niemen is a fighter aircraft unit of the French Air Force. During the dormant phase in 2009, the Escadron was equipped with Mirage F1CT fighters and stationed at Colmar-Meyenheim Air Base.

The Escadron de Chasse or Fighter Squadron3/30 Lorraine is a fighter unit of the French Air Force, reactivated on October 2010 under the designation of 3/30 "Lorraine".

The 30e Escadre de Chasse or 30th Hunter Escadre is a wing of the Fighter Brigade of the French Air Force. It consists of several flying squadrons and support units. 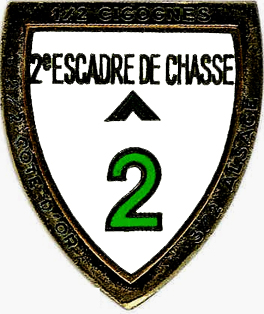 The 2e Escadre de Chasse is a fighter formation of the Fighter Brigade of the French Air Force.

The Groupe de ravitaillement en vol 2/91 Bretagne or Air Supply Group 2/91 Bretagne is a unit of the French Air Force specialized in missions of air supply. Implanted on an Aerial Base, the unit is equipped with Boeing KC-135FR Stratotanker and Boeing C-135FR Stratolifter tanker/transports.

The Escadron de Transformation Rafale 3/4 Aquitaine is an Operational conversion unit of the French Air Force flying the Dassault Rafale, based at Saint-Dizier – Robinson Air Base.

The Fighter Squadron 2/4 La Fayette is a fighter unit of the French Air Force. It is currently stationed at Saint-Dizier Air Base, and is equipped with the Dassault Rafale C. The squadron has a long history dating back to the First World War, and has seen service in the Second World War, the French Indochina War and Algeria. It is now a nuclear strike squadron.

The 3e Escadre de Chasse3e EC or 3rd Fighter Wing is a fighter formation of the Fighter Brigade of the French Air Force.

The Air Forces Command is a command of the French Air Force. It is headquartered at Bordeaux-Mérignac Air Base.