The French Wikipedia (French : Wikipédia en français) is the French-language edition of the free online encyclopedia Wikipedia. This edition was started on 23 March 2001, two months after the official creation of Wikipedia. [1] It has 2,354,455 articles as of 22 August, 2021, making it the fifth-largest Wikipedia overall, after the English-, Cebuano-, Swedish- and German-language editions, the largest Wikipedia edition in a Romance language. It has the third-most edits, and ranks 6th in terms of depth among Wikipedias. It was also the third edition, after the English Wikipedia and German Wikipedia, to exceed 1 million encyclopedia articles: this occurred on 23 September 2010. [1] In April 2016, the project had 4657 active editors who made at least five edits in that month.

In 2008, the French encyclopaedia Quid cancelled its 2008 edition, citing falling sales on competition from the French edition of Wikipedia. [2]

According to a 2013 study by Taha Yasseri et al., from Oxford Internet Institute, Ségolène Royal (FR) and unidentified flying object (objet volant non identifié) were the most controversial articles on the French Wikipedia. [9]

The audience measurement company Médiamétrie questioned a sample of 8,500 users residing in France with access to Internet at home or at their place of work. Médiamétrie found that in June 2007, French Wikipedia had: 7,910,000 unique visitors that visited the site at least once during the month of June 2007 (compared to 4,355,000 unique visitors in June 2006); 2.7 visits per visitor during the period (2.0 visits in June 2006); had held the 12th position (21st in 2006) in "the Top 30 most visited sites in France, excluding Internet applications," according to the criterion of the number of unique visitors and 12th position in "the Top 30 most visited sites in France, including Internet applications," like eMule or Real Networks (22nd position in June 2006).

For the majority of the external links referenced in the articles, a program running on French Wikipedia automatically generates a link titled [archive], which is the union of two parts: the first one starts with http://archive.kiwix.com/cache/?url=, [12] and the second is derived from the referenced URL. [13] This feature has been created for the long-term digital preservation of the external references (so that the archive stay accessible even if the original reference is deleted). 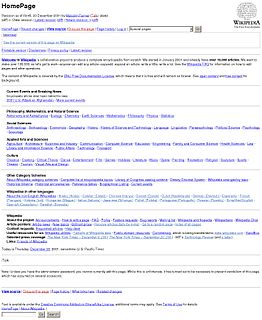 The English Wikipedia is the English-language edition of the free online encyclopedia Wikipedia. It was founded on 15 January 2001 as Wikipedia's first edition and, as of June 2021, has the most articles of any edition, at 6,361,990. As of August 2021, 11% of articles in all Wikipedias belong to the English-language edition. This share has gradually declined from more than 50 percent in 2003, due to the growth of Wikipedias in other languages. The edition's one-billionth edit was made on 13 January 2021. The English Wikipedia has received praise for its enablement of democratization of knowledge and extent of coverage.

The Chinese Wikipedia is the written vernacular Chinese edition of Wikipedia. It is run by the Wikimedia Foundation. Started on 11 May 2001, the Chinese Wikipedia currently has 1,221,564 articles and 3,122,677 registered users, of whom 77 have administrative privileges.

The Oxford Internet Institute (OII) is a multi-disciplinary department of social and computer science dedicated to the study of information, communication, and technology, and is part of the Social Sciences Division of the University of Oxford, England. It is housed over three sites on St Giles in Oxford, including a primary site at 1 St Giles, owned by Balliol College. The department undertakes research and teaching devoted to understanding life online, with the aim of shaping Internet research, policy, and practice.

The Catalan Wikipedia is the Catalan-language edition of the Wikipedia free online encyclopedia. It was created on 16 March 2001, just a few minutes after the first non-English Wikipedia, the German edition. With more than 685,000 articles, it is currently the 20th-largest Wikipedia as measured by the number of articles, and the fifth-largest Wikipedia in a Romance language. In April 2016, the project had 582 active editors who made at least five edits in that month. The edition is most notable for its large number of quality articles, which illustrates the Catalan language's important online presence despite being a minority language.

Wikipedia is a free content, multilingual online encyclopedia written and maintained by a community of volunteer contributors through a model of open collaboration, using a wiki-based editing system. It is the largest and most-read reference work in history, and consistently one of the 15 most popular websites ranked by Alexa; as of 2021, Wikipedia was ranked the 13th most popular site. It carries no advertisements and is hosted by the Wikimedia Foundation, an American non-profit organization funded mainly through small donations.

The Latvian Wikipedia is the Latvian-language edition of the free online encyclopedia Wikipedia. It was created on 6 June 2003. With more than 109,000 articles, it is currently the 68th-largest Wikipedia as measured by the number of articles and the second-largest Wikipedia in a Baltic language.

Since Wikipedia's creation in 2001, there have been numerous academic studies about the online encyclopedia in peer-reviewed publications. This research can be grouped into two categories. The first analyzed the production and reliability of the encyclopedia content, while the second investigated social aspects, such as usage and administration. Such studies are greatly facilitated by the fact that Wikipedia's database can be downloaded without help from the site owner.

The Waray Wikipedia is the Waray language edition of Wikipedia. It is hosted on servers run by the Wikimedia Foundation since 25 September 2005. As of August 14, 2021, this edition has 1,265,463 articles and is the 11th largest Wikipedia edition. Despite having very few active users (79), the Waray Wikipedia has a high number of automatically generated articles created by bots, most of them by Swedish Wikipedian Sverker Johansson's Lsjbot.

WikiWarMonitor is a website dedicated to resolving Wikipedia edit wars. It is operated by a group of researchers from Oxford Internet Institute, Rutgers University, and Central European University.

The Cebuano Wikipedia is the Cebuano-language edition of the Wikipedia free online encyclopedia. It currently contains 5,887,274 articles, most of which were created by the automated program Lsjbot. There are only 197 active users.

Linternaute.com is a major French news site, launched in 2000. As of November 2020, it was the 99th most visited website in France.