He was born into a Jewish family in Győr, Austria-Hungary and died in Budapest, Hungary. Between 1911 and 1919 he was a professor at the Franz Joseph University in Kolozsvár, Austria-Hungary. The post-WW1 Treaty of Trianon transferred former Austro-Hungarian territory including Kolozsvár to the Kingdom of Romania, whereupon Kolozsvár's name changed to Cluj and the University of Kolozsvár moved to Szeged, Hungary, becoming the University of Szeged. [4] Then, Riesz was the rector and a professor at the University of Szeged, as well as a member of the Hungarian Academy of Sciences. [5] and the Polish Academy of Learning. He was the older brother of the mathematician Marcel Riesz.

Riesz did some of the fundamental work in developing functional analysis and his work has had a number of important applications in physics. He established the spectral theory for bounded symmetric operators in a form very much like that now regarded as standard. [2] He also made many contributions to other areas including ergodic theory, topology [6] and he gave an elementary proof of the mean ergodic theorem.

He had an uncommon method of giving lectures: he entered the lecture hall with an assistant and a docent. The docent then began reading the proper passages from Riesz's handbook and the assistant wrote the appropriate equations on the blackboard—while Riesz himself stood aside, nodding occasionally. [7]

The Swiss-American mathematician Edgar Lorch spent 1934 in Szeged working under Riesz and wrote a reminiscence about his time there, including his collaboration with Riesz. [4]

Stefan Banach was a Polish mathematician who is generally considered one of the world's most important and influential 20th-century mathematicians. He was the founder of modern functional analysis, and an original member of the Lwów School of Mathematics. His major work was the 1932 book, Théorie des opérations linéaires, the first monograph on the general theory of functional analysis.

Errett Albert Bishop was an American mathematician known for his work on analysis. He expanded constructive analysis in his 1967 Foundations of Constructive Analysis, where he proved most of the important theorems in real analysis by constructive methods.

Alfréd Haar was a Hungarian mathematician. In 1904 he began to study at the University of Göttingen. His doctorate was supervised by David Hilbert. The Haar measure, Haar wavelet, and Haar transform are named in his honor. Between 1912 and 1919 he taught at Franz Joseph University in Kolozsvár. Together with Frigyes Riesz, he made the University of Szeged a centre of mathematics. He also founded the Acta Scientiarum Mathematicarum journal together with Riesz.

Alfréd Rényi was a Hungarian mathematician known for his work in probability theory, though he also made contributions in combinatorics, graph theory, and number theory. 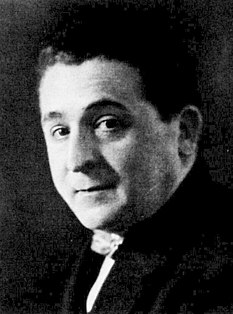 Marcel Riesz was a Hungarian mathematician, known for work on summation methods, potential theory, and other parts of analysis, as well as number theory, partial differential equations, and Clifford algebras. He spent most of his career in Lund (Sweden).

László Kalmár was a Hungarian mathematician and Professor at the University of Szeged. Kalmár is considered the founder of mathematical logic and theoretical computer science in Hungary. 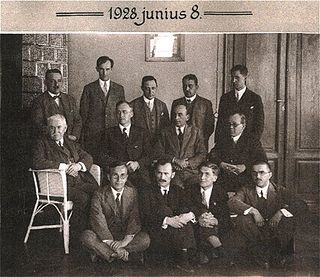 Lipót Fejér was a Hungarian mathematician of Jewish heritage. Fejér was born Leopold Weisz, and changed to the Hungarian name Fejér around 1900.

Raymond Louis Wilder was an American mathematician, who specialized in topology and gradually acquired philosophical and anthropological interests.

Hing Tong was a leading American mathematician. He is well known for providing the original proof of the Katetov–Tong insertion theorem.

Béla Szőkefalvi-Nagy[beːlɒ søːkɛfɒlvi nɒɟ] was a Hungarian mathematician. His father, Gyula Szőkefalvi-Nagy was also a famed mathematician. Szőkefalvi-Nagy collaborated with Alfréd Haar and Frigyes Riesz, founders of the Szegedian school of mathematics. He contributed to the theory of Fourier series and approximation theory. His most important achievements were made in functional analysis, especially, in the theory of Hilbert space operators. He was editor-in-chief of the Zentralblatt für Mathematik, the Acta Scientiarum Mathematicarum, and the Analysis Mathematica. He was awarded the Kossuth Prize in 1953, along with his co-author F. Riesz, for his book Leçons d'analyse fonctionnelle. He was awarded the Lomonosov Medal in 1979. The Béla Szőkefalvi-Nagy Medal honoring his memory is awarded yearly by Bolyai Institute. 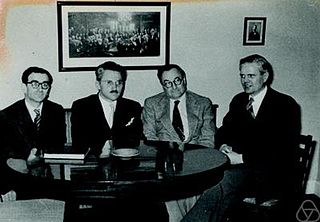 Bolyai Institute is the mathematics institute of the Faculty of Sciences of the University of Szeged, named after the Hungarian mathematicians, Farkas Bolyai, and his son János Bolyai, the co-discoverer of non-Euclidean geometry. Its director is László Zádori. Among the former members of the institute are Frigyes Riesz, Alfréd Haar, Rudolf Ortvay, Tibor Radó, Béla Szőkefalvi-Nagy, László Kalmár, Géza Fodor.

Otto Albin Frostman was a Swedish mathematician, known for his work in potential theory and complex analysis.

Edgar Raymond Lorch was a Swiss American mathematician. Described by The New York Times as "a leader in the development of modern mathematics theory", he was a professor of mathematics at Columbia University. He contributed to the fields general topology, especially metrizable and Baire spaces, group theory of permutation groups and functional analysis, especially spectral theory, convexity in Hilbert spaces and normed rings.

Extension theorem may refer to:

John Michael Horvath was a Hungarian-American mathematician noted for his contributions to analysis especially in functional analysis and distribution theory.