JOCX-DTV, virtual channel 8 (UHF digital channel 21), branded as Fuji TV (フジテレビ, Fuji Terebi) and colloquially known as CX, is a Japanese television station based in Odaiba, Minato, Tokyo, Japan. Owned and operated by the Fuji Television Network, Inc. [lower-alpha 2] it is the key station of the Fuji News Network (FNN) and the Fuji Network System. It is also known for its long-time slogan, "If it's not fun, it's not TV!" [lower-alpha 1]

The headquarters are located at 2-4-8, Daiba, Minato, Tokyo. [2] The Kansai office is found at Aqua Dojima East, Dojima, Kita-ku, Osaka. The Nagoya office is found at Telepia, Higashi-sakura, Higashi-ku, Nagoya. The Japanese television station also has 12 bureau offices in other parts of the world in locations in countries such as, France, Germany, Russia, USA, South Korea, China, Italy, Thailand and the UK. [3]

Fuji Television Network Inc. was founded in 1957 by Nobutaka Shikanai and Shigeo Mizuno, presidents of Nippon Broadcasting System and Nippon Cultural Broadcasting respectively. [4] It started broadcasting on March 1959. [5] In June of that year, Fuji TV formed a network with Tokai TV, Kansai TV, and KBC Television. In October 1966, a news network of exchanging news with local stations with the name of FNN (Fuji News Network) was formed.

In October 1987, Fuji TV began branding their late-night/early-morning slots collectively as JOCX-TV2 (meaning "alternative JOCX-TV") in an effort to market the traditionally unprofitable time slots and give opportunities to young creators to express their new ideas. JOCX-TV2 featured numerous experimental programs on low budgets under this and follow-on brands, a notable example being Zuiikin' English which first aired in spring 1992. The JOCX-TV2 branding itself was changed in October 1989 to JOCX-TV+, which lasted until September 1991, when it was replaced with GARDEN/JOCX-MIDNIGHT in October 1991. Meanwhile, Fuji TV helped produced only the third series of the British children's television programme Thomas the Tank Engine & Friends (now called Thomas & Friends ) with its creator and producer Britt Allcroft. The GARDEN/JOCX-MIDNIGHT branding lasted until September 1992 when it was replaced with the JUNGLE branding, which lasted from October 1992 to September 1993. The JOCX-MIDNIGHT branding was introduced in October 1993 to replace the previous JUNGLE branding, and lasted until March 1996 when Fuji TV decided to stop branding their late-night/early-morning slots.

On March 10, 1997, Fuji TV moved from their old headquarters in Kawadacho, Shinjuku, into a new building in Odaiba, Minato designed by Kenzo Tange.

Since 2002, Fuji TV has co-sponsored the Clarion Girl contest, held annually to select a representative for Clarion who will represent Clarion's car audio products in television and print advertising campaigns during the following year.

Fuji TV, which broadcasts Formula One in Japan since 1987, is the only media sponsor of a Formula One Grand Prix in the world. Fuji TV has also licensed numerous Formula One video games including Human Grand Prix IV: F1 Dream Battle.

On August 7–21, 2011, more than 2,000 protesters from Japanese Culture Channel Sakura and other groups rallied in front of Fuji Television and Fuji Media Holdings' headquarters in Odaiba, Tokyo to demonstrate against what they perceived as the network's increased use of South Korean content, information manipulation and insulting treatment of Japanese people. Channel Sakura called Fuji TV the "Traitor Network" in these protests. [12] [9] [13]

Further on June 29, 2015, Fuji TV apologized for running subtitles during a show earlier in the month that inaccurately described South Koreans interviewed on the street as saying they “hate” Japan. The apology came after a successful online petition over the weekend, with people stating the major broadcaster had fabricated the subtitles to breed Anti-Korean sentiment amongst the Japanese public. Fuji TV explained that both interviewees indeed spoke of their dislike of Japan during the interviews, but it accidentally ran clips that didn't contain that message. According to the broadcaster, “we aired these inaccurate clips because of a mix-up during the editing process as well as our failure to check the final footage sufficiently.” [14] [15] 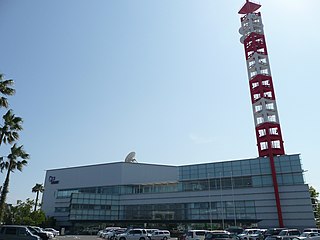 Miyazaki Telecasting Co., Ltd. is a Japanese TV station in Miyazaki. Currently branded as TV Miyazaki (テレビ宮崎), it is affiliated with NNN, FNN/FNS, and ANN. 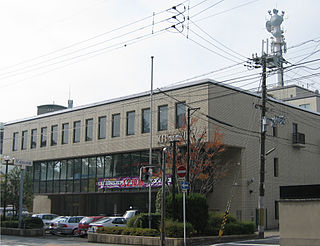 Okayama Broadcasting Co., Ltd. (岡山放送株式会社) is a TV station broadcast in Okayama and Kagawa Prefectures. The abbreviation, OHK stands for Okayama Hoso K. K., the corporate name in romaji. It is a network affiliate of Fuji News Network (FNN) and Fuji Network System (FNS). The callsign is JOOH-TV.

In Japan, late night anime refers to anime series broadcast on television late at night or in the early hours of the morning, usually between 10 PM and 4 AM JST.

Japan Satellite Television (JSTV) is a Japanese broadcaster in Europe, the Middle East and North Africa. Launched in March 1990 and broadcasting from London, it carries the programming from the NHK World Premium service in the regions served. 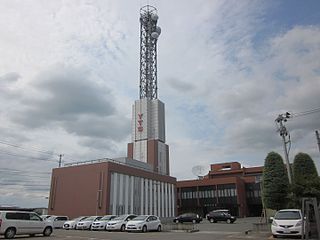 Yamagata Television System,Inc., also known as YTS, is a Japanese broadcast network affiliated with the ANN. Their headquarters are located in Yamagata Prefecture.

Super Hero Time is a programming block on the Japanese television network TV Asahi featuring new episodes of tokusatsu television series from the Super Sentai and Kamen Rider Series. Both series have decades of history and have been intertwined in the public imagination for some time, not least of all because the driving creative force behind both was manga artist Shotaro Ishinomori and both were produced by the same production company, Toei Company; however, they did not air together until 2000 with Kamen Rider Kuuga and Kyuukyuu Sentai GoGoFive, though at the time they were not acknowledged together. Super Hero Time airs every Sunday morning, from 9:00 to 10:00 JST. The block is shown all over Japan via the All-Nippon News Network. Though, in other prefectures, one or both shows can be seen on other stations which are not affiliated with ANN. 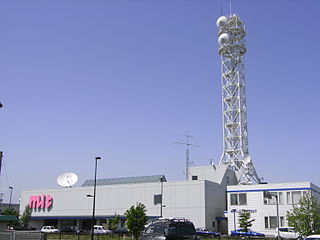